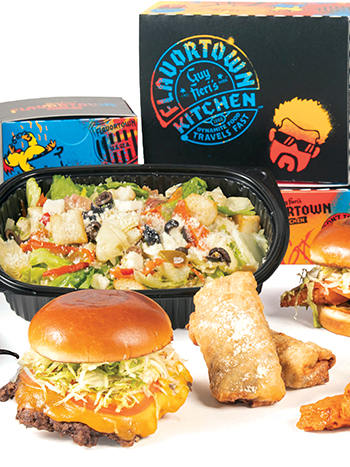 Culinary superstar Guy Fieri is bringing his latest scrumptious eats to Mt. Lebanon, with the opening of his new delivery-only dining establishment, Guy Fieri’s Flavortown Kitchen. Launched in collaboration with restaurateur Robert Earl, Flavortown is a part of Virtual Dining Concepts, which deems itself “the creator of virtual restaurant brands poised to expand the revenue of existing restaurant kitchens.” Also known as ghost kitchens, the premise is simple: restaurants like Flavortown operate a delivery-only service, using the kitchen of an existing restaurant, which provides a second source of income to the already established restaurant, a spokesperson for Virtual Dining Concepts said.

You probably know Fieri from his popular Food Network show, Diners, Drive-ins and Dives, which once included a visit to the Dor-Stop in Dormont. He also opened a Guy Fieri’s American Kitchen and Bar inside the Westmoreland Live Casino last year. In Pennsylvania, Flavortown is open in 13 locations, as of late February, with new locations opening weekly, the spokesperson said. All of the Pennsylvania locations operate out of existing restaurants. In the Pittsburgh region, that includes locations in Robinson, Station Square and The Waterfront. The menu includes appetizers, like the Jalapeno Pig Poppers, burgers and sandwiches, sides—including Guy’s signature fries—and desserts. The Mt. Lebanon location is open for delivery from 11 a.m. to 9:30 p.m. www.guysflavortownkitchen.com

Guy Fieri’s Flavortown Kitchen has come to The Galleria. The delivery-only service is accessible through most food delivery apps.