There was room for improvement in the way the legislature addressed challenges faced by Pennsylvanians with special needs, freshman State Rep. Dan Miller decided when he first went to Harrisburg to represent our district two and a half years ago.

So Miller helped form and became co-chair of the House Autism and Intellectual Disabilities Caucus and in 2014 launched the Children and Youth Disability and Mental Health Summit at Beth El Congregation, 1900 Cochran Road.

The first summit was a one-day affair, but there was so much interest that he added a second day in 2015. This year once again the programming is expanding.

This year’s summit will take place at Beth El on Thursday and Friday, March 3 and 4. Keynote speakers are Torrie Dunlap, CEO of Kids Included Together, which trains community organizations on best practices of how to include children with disabilities in recreational and child and youth development programs, and Chaz Kellem, Senior Director of Advocacy for Race and Gender Equity for the YWCA of Greater Pittsburgh.

Among the organizations at last year’s event were Three Rivers Center for Independent Living, the Autism Society of Pittsburgh, Outreach Teen & Family Services and the Disability Rights Network. Also appearing at the summit were U.S. Congressman Tim Murphy and staff from the offices of U.S. Senators Bob Casey Jr. and Pat Toomey.

Although the summit’s primary goal is to connect parents of  children with special needs with helpful resources, Miller says the information has found a larger audience. “We get grandparents who want to learn more, so they can better support their families; we get a lot of people with disabilities who want to learn more to be better advocates for themselves.”

Along with expecting even more participation this year, Miller is looking to expand the summit’s online presence. Some of the workshops will offer  continuing education credit for social workers, teachers and lawyers.

“Another added benefit is just getting all of those professionals together in one room, give them a chance to talk and network,” Miller says.

Pennsylvania Youth Leadership Taskforce is joining with Miller in the event, bringing 100 children with disabilities to take part in the legislative panel.  Other groups that will be prominent are United Way’s 21 and Able, and the PEAL Center (Pennsylvania Education and Advocacy Leadership). 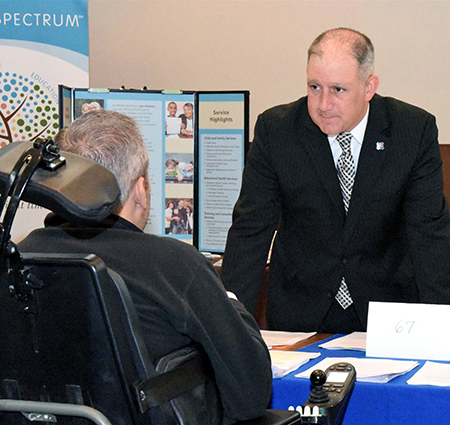 “Feedback from all the participating organizations has just been off the chart,” Miller says. “Every year we’re fielding calls from all over the area, West Deer, Washington County, asking ‘When is it coming?’”

The summit is free and vendors—mostly nonprofit—don’t have to pay to set up tables. Beth El donates the space. Costs not covered are about $1,500, mostly for security and table rental. Last year St. Clair Hospital covered those costs. Miller is looking for a benefactor to step up this year. He is looking for volunteers to help staff the summit. Anyone interested can email RepMiller@pahouse.net. For more details on the summit, visit the Summit’s Facebook page.

“(Legislators) make direct personal contact with people who need to navigate the system for their loved ones. This is the most impactful event [my office] does,” Miller says. “Legislation gets born out of these summits.”