What are the odds; not only of being a twin, but also being one of twelve in the same grade? Meet the Markham first grade twins…

The transition to first grade is significant for every youngster, especially in school districts like Mt. Lebanon, where public Kindergarten is half-day. But for 12 lucky students, adjusting to the first semester of the 2013-14 year has been more comfortable because they’re sharing the experience with someone who knows them like no other: their twin. This year, six sets of twins are among the 62 students in the first grade at Markham School.

Principal Robert Freil says, “It’s an anomaly. This is the most sets of twins we’ve had at Markham in at least 10 years …probably more. “First-graders have such an excitement for life,” adds Freil. “These twins are so darn cute!” 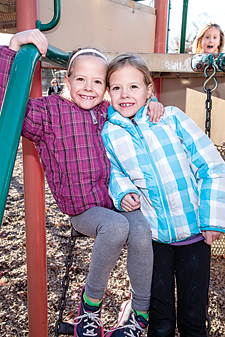 Payton and Riley are identical in every sense of the word. Though they have two older sisters, it’s clear that their “go-to” person is their twin. Riley described what she likes best about having a twin as “when you are being bullied, Payton always has my back.” Payton adds, “When Riley gets scared, she asks me to go with her.” Payton and Riley love different aspects of first grade. Riley looks forward to playing on computers and reading; Payton prefers First in Math. What’s their favorite food? Tacos for Riley and ice cream for Payton. Both girls want to grow up to be doctors, like their daddy. 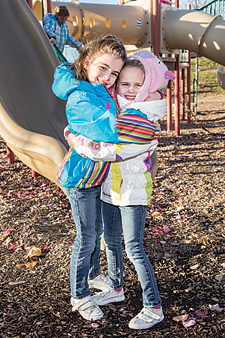 If Woodhaven Drive residents report seeing double, that’s because there are five sets of twins on that street. “We’ve been wondering what’s in the water around here,” jokes Jennifer Cox… but it’s also nice to have people to turn to for twin advice.” Sabrina thinks first grade is cool because of gym class. She also enjoys playing with Adeline at recess. Having a fourth grade “buddy,” or mentor, is what Adeline loves about Markham first grade. Sabrina’s favorite food is pizza; Adeline picks candy. For now, both girls want to be artists when they grow up. 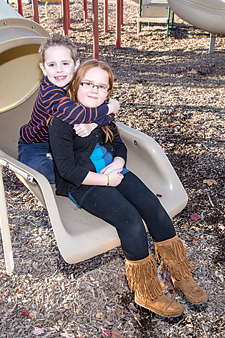 Hannah is at Markham. Ryan is enrolled in a two-year speech program at Hoover Elementary. He will join his twin sister at Markham next year. Despite being separated, the twins are crazy about first grade. Hannah says she “just enjoys learning;” Ryan, apparently the literary type, loves writing in his workbook and the “read-in.” Pizza is Hannah’s favorite food. Her brother craves macaroni and cheese and french fries. Hannah hopes to be a teacher when she’s all grown up. And Ryan is planning a dual career as a “Lego Master and a Monster Truck Driver.” (Doesn’t that sound fun?) 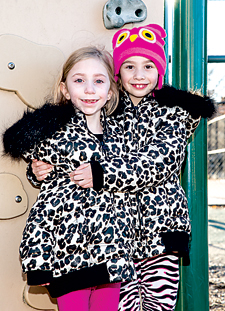 Aubrey and Bailey barely look like siblings, let alone twins. Bailey clearly enjoys the limelight, while Aubrey is more quiet and shy. Celene Goldtrap, their mother, says, “My girls have very distinct personalities. They are independent thinkers.” But they share much in common: adoring first grade, loving art, eating pasta and making new friends. Bailey plans to be a busy grown-up as she wants to be both a doctor and an artist, while being a mom. Aubrey has her sights set on being an artist. 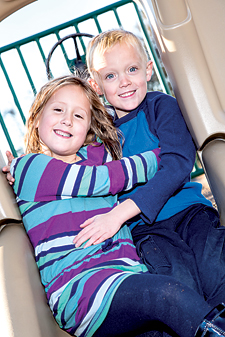 Mary and Matthew share an enthusiasm for being first–graders. They love to play together, switching between what Mary wants to do and what Matthew prefers. But instead of resembling each other, Mary’s personality is similar to one older brother, and Matthew’s personality is like the other older brother. “They are different in part because of the boy/girl issue. But they get along,” reflects Beth Langston, their mom. Mary looks forward to seeing her friends each day at school. Her favorite thing to eat is “Grandma’s chocolate cake.” And Mary aspires to be a gymnast and a (very fit) veterinarian. For Matthew, school wouldn’t be the same without gym class. He prefers to eat spaghetti. When he grows up, Matthew “wants to be a moneymaker…you know…someone who earns money.” 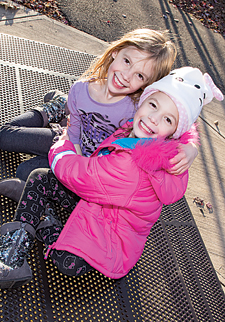 Despite looking alike, Alexandra and Sophia have very different personalities. According to Tracy, their mom, “Sophia is the quiet and introspective one. Alexandra is our social butterfly.” Like the other twins we’ve met, the girls love school. Sophia likes reading books at Silent Story Time; Alexandra likes seeing her friends. Sophia says her yummiest food is lemon pie. She wants to be an artist. Alexandra prefers popsicles and wants to grow up and become a veterinarian. Alexandra adds, “Sophia is my built-in buddy.”

At Markham and the other district elementary schools, parents of twins are contacted before room assignments are made, especially in kindergarten and first grade. Freil explains, “We look at each child’s individual needs. Do they need to be in the same classroom as their twin? Or will they do better if they are assigned separate teachers? The parents are part of that decision process.”

mtl hopes to check in with these bright young people in several years, perhaps as they prepare to enter middle school. For now, we wish them well as they learn and grow, two by two.