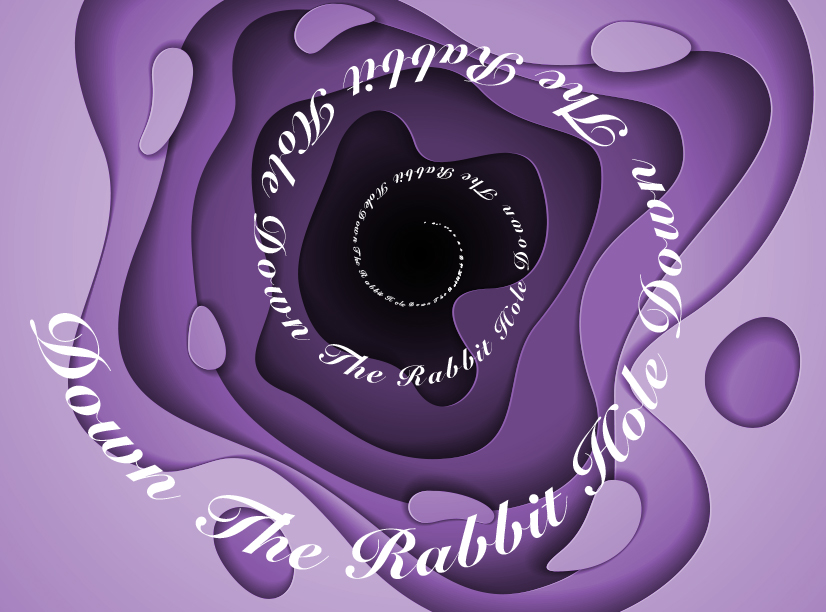 In the prologue to the Coen brothers’ 1984 film BLOOD SIMPLE, a voice-over flatly states, “Something can go all wrong.” Clichés such as “turn on a dime,” or “if only” become great movie devices in the hands of the right filmmakers. In the following films, characters find themselves propelled in a new direction: down the rabbit hole. A turnstile, a turn signal, a lie, a phone call and a tranquil moment by a lake dramatically alter lives—and the journeys are riveting. 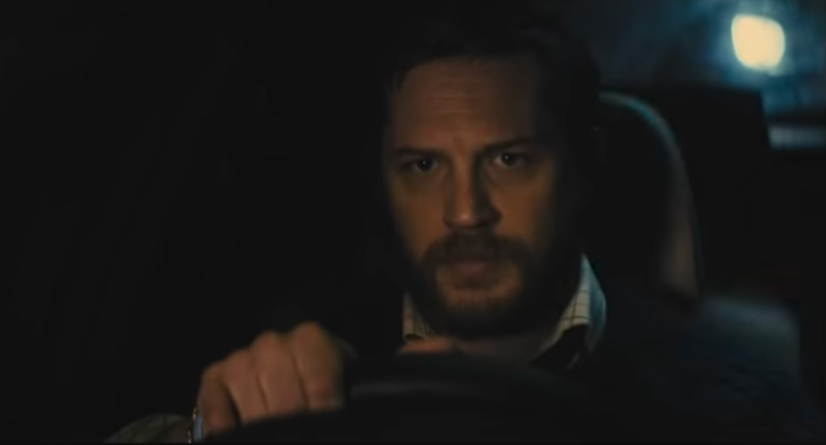 In the first minute of the movie, the flick of a turn signal from left to right changes Ivan Locke’s life. Written and directed by Steven Knight, LOCKE takes place in 90 minutes of real time inside a BMW X5 featuring only one character as he drives through the night. Minimalism at its best, the entire story consists of 36 phone conversations between Locke and six characters as well as some powerful rants delivered to his dead father. Locke’s dilemmas and Tom Hardy’s powerful performance draw the viewer into this confined space visually defined by glaring night lights and harsh reflections. Locke is the foreman and supervisor of the biggest non-military single concrete pour ever made in Europe. The pour is scheduled for early the following morning outside of Birmingham, but Locke drives away from Birmingham towards London. He drives away from his wife, Katrina; two sons, Eddie and Sean; and his floundering, near-hysterical underling, Donal, whom he coaches on how to conduct the massive concrete pour. To add to Locke’s miseries, he is coming down with a cold. Reminiscent of a radio drama, the story depends on the accomplished voices of the actors who convey convincing levels of despair, disbelief and loneliness. When Locke reveals his betrayal and its consequences to Katrina she rages, “The difference between never and once is the difference between right and wrong.” LOCKE provokes discussion about morality, responsibility, forgiveness and doing the right thing. But what is the right thing? 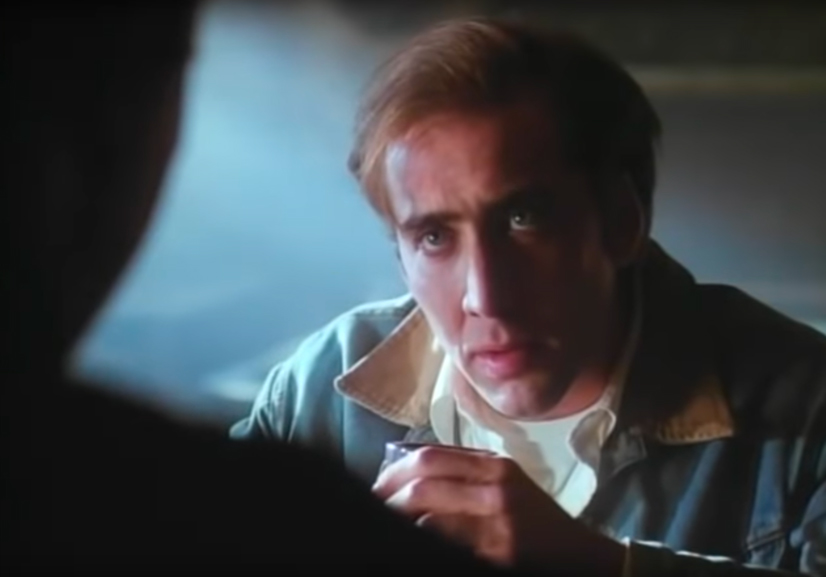 The movie was first released on video. The owner of the Roxie Theater in San Francisco liked it so much he put it on the big screen. RED ROCK WEST broke attendance records.

John and Rick Dahl were 34 and 28 when they wrote the screenplay for RED ROCK WEST. The movie, directed by John, is a fitting tribute to another set of precocious brothers, Joel and Ethan Coen. In 1984, the Coens were 30 and 27 when they wrote, directed and edited their first film, BLOOD SIMPLE. The Dahl brothers followed the Coens’ “something can go wrong” lead and created a delicious thriller. In his most endearing role, Nicolas Cage as Michael wanders into Red Rock, Wyoming, population 1,523, looking for a job at a roadside bar. Eight minutes into the story, the bartender, played by J.T. Walsh, leans over the bar towards bright-eyed Michael. “You’re Lyle from Dallas, right?” If it means a job, Michael will be Lyle from Dallas. And down the rabbit hole he goes. This black comedy thriller twists and turns after the real Lyle from Dallas shows up. As Lyle, Dennis Hopper menaces every scene and Lara Flynn Boyle as Suzanne matches him as she embodies the best of the worst characteristics of the femme fatale. The Dahl brothers are winking with us each time Michael tries to leave Red Rock only to find himself back in the miserable town. In one attempted escape Michael slides around the roof of a big rig driven by Dwight Yoakam. How he gets on that rig is a thrilling suspension of disbelief. In DOUBLE INDEMNITY Barbara Stanwyck seduces Fred MacMurray with her ankles. Will Michael succumb to Lara Flynn Boyle’s body parts or will he finally escape Red Rock? Follow the money. Yoakam’s country-western song, Thousand Miles From Nowhere, is the perfect tune to complement the final credits. 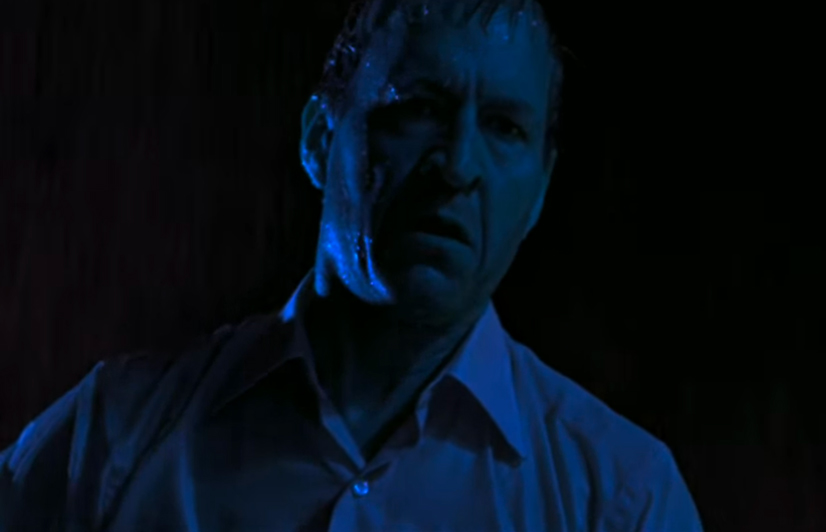 Like the Dahl brothers, thirtysomething filmmakers Nash and Joel Edgerton create murderous mayhem in their Australian thriller, THE SQUARE. We suspect from the first scene that Ray Yale will be sliding down some slippery slopes. As Ray, David Roberts presents a hapless, middle-aged fellow who makes the wrong choice at every turn. As the construction manager of a luxury building project, Ray takes kickbacks from contractors, but his big wrong choice is his steamy affair with the much younger Carla, who keeps pressing Ray to leave his wife and run away with her. Carla discovers that Smithy, her blustery, tow-truck driving, drug-dealing husband, stashed a large bag of money in the rafters of their laundry room. A perfect setup. Steal the money, hire an arsonist to burn the house down, and away they go. They have the perfect alibi for the house burning. With their spouses at their sides, Carla and Ray attend a community Christmas picnic in their Australian town. From a panoramic hilltop the entire neighborhood will witness the fire, presumably caused by faulty holiday lights. Smithy may be dastardly, but he loves his dog. Smithy calls his mother and delivers the line that sets the story spiraling. “Hey, Mum can you feed Mugs for me?” For Ray, bad stuff keeps happening. And who is sending him Christmas cards with the greeting, I know what you did? To their credit, the Edgertons make all this tense craziness plausible and in the end we understand the meaning of the title, THE SQUARE. 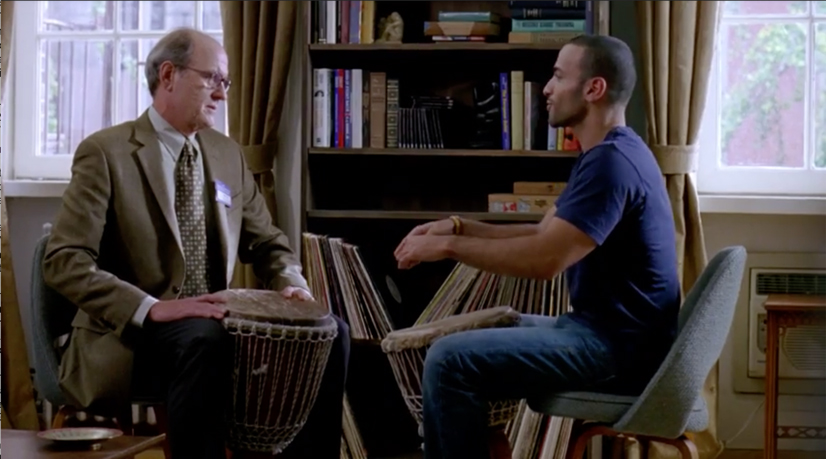 Neither Richard Jenkins nor Haaz Sleiman knew how to play the drums. Kudos to the sound editor. In 2018 Richard Jenkins was nominated for Best Supporting Actor in Guillermo del Toro’s THE SHAPE OF WATER.

Writer-director Tom McCarthy pays attention to details and so does Richard Jenkins. Jenkins received an Academy Award nomination for Best Actor in THE VISITOR for capturing the essence of Walter Vane, a lonely, humorless economics professor plodding through life in a Connecticut suburb. In the silent first minutes of the movie, Jenkins conveys that Walter’s existence is ordered and regulated. Later, sitting at his office desk, Walter whites out the old date on his class syllabus. We know he has done this again and again. This small, simple detail conveys that Walter is as stale as his syllabus. When directed to present a paper he co-authored at a conference in New York City he immediately balks. As he sheepishly explains to the department head, he didn’t co-author the paper—perhaps he never even read it. He has no choice but to attend the conference. For years Walter has rented a Greenwich Village apartment but hasn’t been there for a long time. When he arrives at his apartment he discovers a young woman in his bathtub. Her boyfriend responds to her screams and confronts Walter. Some shady fellow rented the apartment to Tarek, (Haaz Sleiman) a young Syrian drummer and Zainab, (Danai Gurira) a jewelry designer from Senegal. Tarek and Zainab are defensive, confused and soon to be homeless. Walter allows them to stay and for the first time we see him cautiously interact with other human beings. Outgoing, engaging Tarek coaxes and cajoles Walter into learning to play the African drum. Now we realize why Walter pathetically plucked at the piano in the movie’s opening scene. He was trying to master the wrong instrument. The power of music takes over. In days Tarek, Walter and Zainab become a tentative makeshift family. Walter even drums with improv groups in Central Park. What a pleasant, uneventful tale about a lonely man rescued by music and immigrants. But that’s not the whole story. The “down the rabbit hole” moment is the descent to the subway platform. Managing drums and tickets, Tarek mumbles, “I’m stuck, man.” More than stuck Tarek’s life takes a razor-sharp turn. Detained by the police, Tarek, who is undocumented,  languishes in a deportation center in Queens. His Syrian mother, Mouna, (Hiam Abbass) arrives from Michigan and in a heartbreaking scene reveals to Walter her own “if only” guilt. Twelve years ago, Tom McCarthy put a face on immigration by creating a poignant story brought to life by actors who vividly captured their characters’ humanity and circumstances. McCarthy never preaches, judges or over-dramatizes the narrative. This is Walter’s story and his transformation leads to the memorable final moments. Fortunately, he gave up the piano.

Here are some other movies that send characters down the rabbit hole with striking consequences.

The familiar formulas of romantic comedies flourish on the screen. Hits of the 1930s include classics such as IT HAPPENED ONE NIGHT, BRINGING UP BABY, and an abundance of Fred Astaire and Ginger Rogers dance fests. Most of these match-ups begin with conflict and contempt between the male and female leads, but by the end of the last reel Claudette and Clark, Cary and Kate, and Fred and Ginger recognize, to steal a cliché from JERRY MCGUIRE—they had each other at hello. Then there are the stories featuring mismatched couples and relationships that will end as bittersweet memories. In ROMAN HOLIDAY we know that Princess Audrey Hepburn and newsman Gregory Peck will never find permanent happiness among the ruins. In the dizzy culture of Tokyo, Scarlett Johansson and Bill Murray remain LOST IN TRANSLATION.

This cult favorite features two perfect devices for sending the main character down the rabbit hole—a knock on the head and mistaken identity. In this modern revival of the screwball comedy genre, Rosanna Arquette takes a delightfully twisted journey.

The acclaimed Japanese writer/director Hirokazu Koreeda uses the switched-at-birth plot point to tell this story of family upheaval. Nothing is predictable.

In August 1945, Hungarian villagers prepare for a community wedding. It will be a welcome return to normalcy after Germany’s defeat in World War II. Everything changes when two men get off the train and walk to the town. Writer/director Ferenc Torok pays sly homage to HIGH NOON. 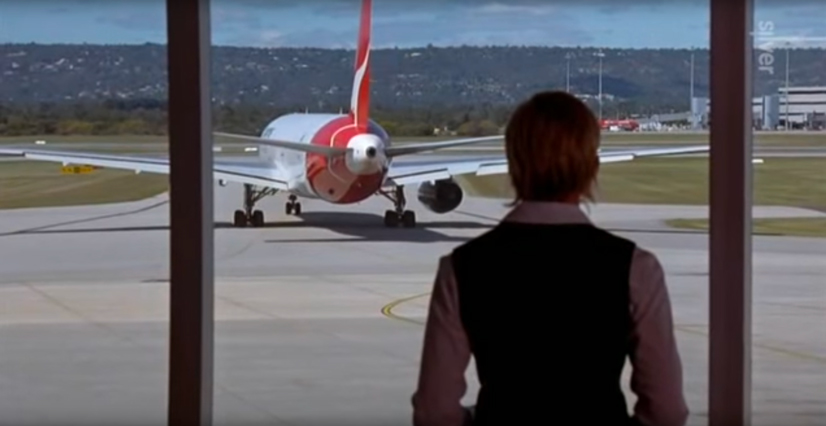 JAPANESE STORY, directed by Sue Brooks and written by Alison Tilson, begins as a potential romantic tale steeped in the clash-of-cultures story line. Sandy (Toni Collette), a grumpy software-designing geologist, works for a mining company near Perth, Australia. In her unadorned apartment she eats baked beans on toast for dinner. Hiromitsu Tachibana (Gotaro Tsunashima), a Japanese businessman, arrives to visit mines and potentially purchase the small company’s software. Reluctantly, cranky Sandy agrees to be his driver and tour guide. Overdressed, smug, and speaking little English, Hiromitsu stomps on Sandy’s last nerve. She is unable to dissuade him from asking for a tour of the inhospitable Pibara desert. When the car wheels sink into the mud and sand they struggle one day, one night and the next morning before Hiromitsu ingeniously maneuvers their escape from the vast, hostile outback. The story lingers on this plot point reminding viewers that Australian movies such as WALKABOUT and RABBIT-PROOF FENCE excel at exploring the struggle between civilization and the wilderness. A tentative romance follows the survival bonding experience. Several days later Sandy and Hiromitsu languish in a welcoming space among a bower of trees surrounded by red rocks. It’s a peaceful nature in stark contrast to the vast foreboding desert. One hour into this seemingly predictable tale, as Hiromitsu attempts to better understand English, Sandy laughingly quips, “Now I’ll teach you a new Australian colloquialism.” In a jolt we realize that JAPANESE STORY is not a light-hearted romance, but a searing examination of consequences, helplessness, and emotional turbulence.

The quirky, cult favorite 1994 Australian comedy, MURIEL’S WEDDING, introduced Toni Collette as the loony, delightful dork, Muriel. She was nominated for a Best Supporting Actress in 1999 for THE SIXTH SENSE. Neither roles hint at the emotional depth of character Collette achieves in JAPANESE STORY. The story belongs to her. In one silent scene Collette tackles a heartbreaking task that remains memorable. Once the plot careens in a new direction, Sandy’s coworker, Bill, sharply asks the unsettling question that will haunt her forever, “What the hell were you doing out there?”