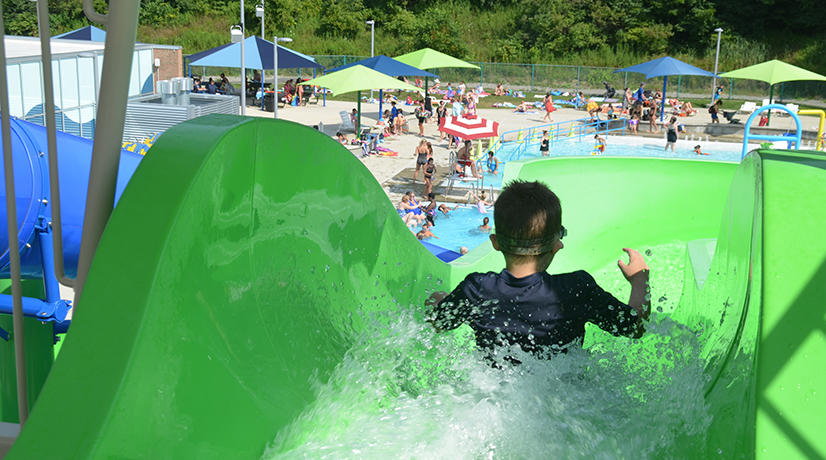 Because I  don’t want to embarrass him, I’m not going to use the photo here even though I love it. It’s a cell phone snap of my only child, at about age 7, in the shallow end of the Mt. Lebanon pool, before its most recent renovation. I took it from one of the white plastic lounge chairs closest to the water slide, maybe 20 feet away from the water’s edge. All you can see is his head, bobbing just above the water’s surface, with big blue plastic goggles over his eyes. He’s got a goofy half-grin and his fudge-brown hair is all rolling down the side of his head like lava.

He wants to be in the water, but he’s also watching me, to make sure Mom’s watching him do the latest water trick. He probably just did one of those kid pool stunts, like an underwater handstand or somersault or something. I don’t remember. But he looks happy and it still makes me happy to see this picture.

Some of his most memorable times have been spent in Mt. Lebanon parks and recreation programs: Learn-to-skate in the ice rink, “amoeba-ball” as we called kindergarten soccer, seemingly always in the mud, spinning on Martha’s Playground, pondering owl pellets at School in the Park in Bird Park during third grade, his waterlogged, pruney white fingers coated in sunscreen, grabbing chicken nuggets at the pool snack bar and the whole family watching the July Fourth concert in the park on Grandpa’s gray wool Army blanket.

To make sure future generations have unlimited opportunities for perfect memories, Mt. Lebanon recently completed a parks master plan update and recreation center feasibility study. Thousands of you weighed in with your opinions, and staff and consultants from Environmental Planning and Design completed the report, which the Commission accepted in April. Merle Jantz lays out all the possibilities for the future.

This is a great time of year to get out into Mt. Lebanon’s parks. Take a bottle of water, a camera or notebook, or take nothing but your senses. Here’s a list to get you started.

My baby is 21 now, off working at summer camp after his first few years at college. I don’t get to see him much these days, and he wouldn’t be caught dead at any pool with his parents, but sometimes, when we’re out in public, I do catch him looking back at me again, with a half-smile, as if to say “Look, Mom!”