A new high-tech addition to the exhibits at the Pittsburgh Zoo & PPG Aquarium has sea life fanatics of all ages interacting with the aquarium in a fresh way. This summer, the zoo unveiled a new interactive wall display and mural to honor PPG’s renewed 10-year contract as the Aquarium’s naming sponsor. Pittsburgh ad firm Garrison-Hughes conceptualized and created the interactive wall with technology provided by local tech startup Electric Owl, while illustrator Dave Klug of Mt. Lebanon designed the floor-to-ceiling illustration accompanying the wall.

The exhibit features several large touch screen televisions that display information and multimedia highlighting the zoo’s variety of aquatic wildlife, as well as its conservation efforts. The screens feature a world map that children can touch to learn about fish, animals or conservation efforts unique to that part of the world through photos, text and short videos. Kids of all ages can interact with the wall: Touching buttons and looking at videos will appeal to younger children, while older children can read through the facts. “[The technology is] second nature to them,” says Bill Garrison, co-founder of Garrison-Hughes. “In some cases, the moms behind them don’t know what to do, but kids do.”

Garrison and Dave Hughes, a Mt. Lebanon resident, founded Garrison-Hughes nine years ago. The pair has worked together for more than 20 years and collaborated on a number of exhibits, but Garrison notes that they’ve never created one quite like the zoo’s. “Ten to 15 years ago, your first idea wouldn’t have been interactive touch screens for kids,” he says, “but their comfort level with that type of technology allowed us to go to that level of sophistication. It’s very different than an exhibit you might have seen [back then.]”
The founders of Garrison-Hughes use their talents to better the Mt. Lebanon area, as well. The firm is currently doing branding work with the Mt. Lebanon Library, and Hughes, of Carnegie Drive, is on the board of directors of Mt. Lebanon’s Outreach Teen and Family Services.

Next to the touch screens is Klug’s “Wall of Watery Wonders,” a “Where’s Waldo”-style illustration that prompts guests to find a set of ocean-themed items hidden within the detailed design. The large blue and white drawing provides a contrast to the high-tech touch screens. “My half of the exhibit is low-tech—you look and use your brain,” says the artist. “There’s a nice juxtaposition.” Klug, of Summer Place, is an accomplished illustrator who has designed art for the zoo’s Kids Kingdom in the past. His work has also been featured in Highlights Magazine, Nickelodeon and the Wall Street Journal.

Klug’s inspiration? “I was always a big fan of Jacques Cousteau,” he says. “As I was working on [the illustration] I would narrate in my worst French accent describing the sea life and its habitat in the deep. Of course, I was talking to myself as usual, but it made it a little more fun.”

The Zoo & PPG Aquarium sees more than a million visitors a year, so the exhibit was designed to withstand plenty of abuse. The wall’s technology means it can be regularly updated.

Pittsburgh Zoo Development Coordinator Amy O’Neill reports that patrons and personnel alike have been pleased with the new exhibit, noting its special attention to the zoo’s wildlife conservation efforts, which include animal rescues and the Sea Turtle Second Chance Program, a program founded by the zoo to rehabilitate turtles that are injured or live in areas plagued by pollution. 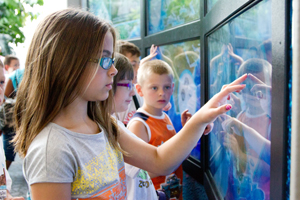 The interactive wall has accomplished many of the goals that PPG its collaborators set out to fulfill. “PPG had a goal to educate people on their conversation efforts and modernize the exhibit,” says Garrison. “[We thought], what can we do that resonates with kids, toddlers and teens? What can incorporate the messages in a fresh way and be updated on a regular basis?” 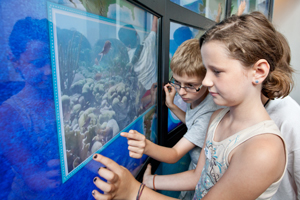