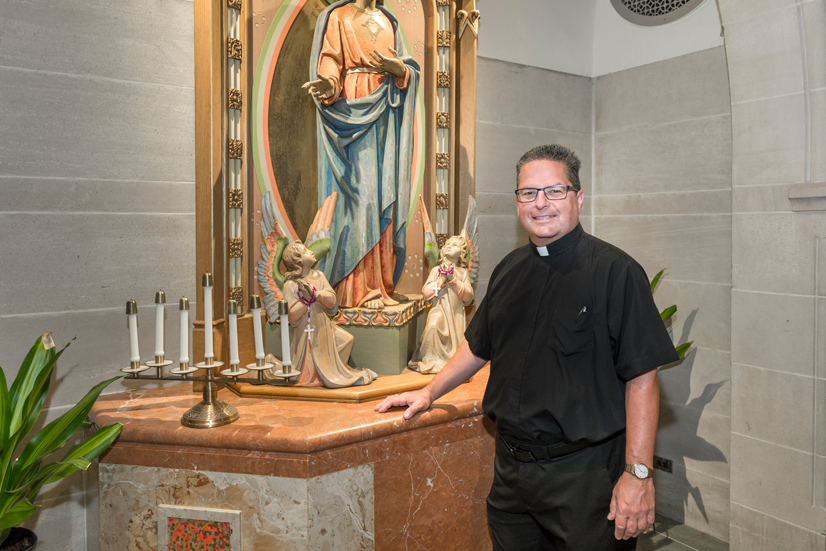 n the evening of June 19, more than a hundred cars lined up in the parking lot of St. Bernard Church, with many more overflowing onto the street and arriving steadily throughout the hour, for drivers to honk, cheer and say farewell to their beloved pastor of 11 years, the Rev. David Bonnar.

In addition to merging the St. Bernard and Our Lady of Grace parishes under a new name, St. Michael the Archangel Parish, the Diocese of Pittsburgh also issued new clergy appointments over the summer. Bonnar moved to the newly established St. Aidan Parish in Wexford, and the Rev. Brian Welding took his place here in Mt. Lebanon on July 1.

“Brian and I are both from the same parish, St. Gabriel’s in Whitehall. We studied together in Rome for one year, worked together in the Diocese for two years. I’ve known him since I was a kid. I think the parish will be in good hands,” says Bonnar.

Under Bonnar’s leadership, St. Bernard’s underwent some extreme restoration initiatives. The structure, which will still be called St. Bernard Church, was built in stages from 1919 to 1969—starting with the school, then the lower crypt church and finally the grand upper church—and received few major upgrades after its completion.

When Bonnar became pastor, he undertook the restoration of the impressive historical landmark. He has since overseen extensive masonry and roofing projects, window replacements, interior construction projects and countless other restoration initiatives, large and small, to bring the site back to its former glory.

“I know the scaffolding signaled inconvenience, but for me, it was a beautiful metaphor for what the Church must always be. It must always be in restoration,” says Bonnar. “The faith community can never become complacent or stand still.”

St. Michael the Archangel Parish certainly did not stand still during Bonnar’s tenure. When the diocese announced its On Mission initiative five years ago, which reached full momentum in 2018, and would lead to the eventual consolidation and restructuring of parishes across Pittsburgh, the parish had to prepare to change and grow.

“Community became the focal point of my ministry,” says Bonnar. He had already established parish picnics and monthly social gatherings after Masses to help foster a deeper sense of belonging for parishioners at St. Bernard’s, but he expanded those efforts to welcome parishioners from Our Lady of Grace.

He started by encouraging members of both parishes to swap out their regular locations and Mass times in order to meet each other. Then the first ministry to combine was the music ministry, so a combined choir alternated weekly between the churches.

Bonnar personally spent the majority of his time at Our Lady of Grace—saying Masses, attending meetings, fish fries and other social events—and he knows much of the St. Bernard community did the same to help “build a bridge of unity.”

“I give Fr. Dave a lot of credit for the time and energy he spent meeting every group that was at Our Lady of Grace,” says Patricia Kanavich, Larchdale Drive. “It made me think we were joining, not being taken over.”

“He spoke many times about building a bridge, and in my opinion, he is that bridge,” says Mary Lou Chorazewicz, a Heidelberg resident and parishioner. “Without him and his dedication to unity, we would not be the happy parish that we are.”

While Bonnar has already moved to Wexford to take up his new position at another recently combined parish, he knows he will never truly leave the South Hills. A Castle Shannon native, he frequently visits his sister who lives there and his other siblings in Upper St. Clair and Bethel Park.

He also made Mt. Lebanon his home for 11 years—he loved running on Washington Road, enjoying local restaurants (he was a regular at Pamela’s), collaborating with the municipality on various events, and working with the police and fire department, which he calls “second to none.”

“This community, in so many ways, is richly blessed. There is a lot of pride, as there should be, to say ‘I live in Mt. Lebanon.’ But the pandemic has taught us that we can’t lose sight of the essentials in life,” says Bonnar. “In the end, we must always feel grateful for what is ours, and I feel grateful and blessed to have been a resident of this community for 11 years. I will always drive through Mt. Lebanon with a sense of gratitude and pride, because there are just so many good people here, wonderful families and great public servants.”