Over the years, researchers have focused considerable energy upon the examination of the father-daughter relationship. Recognized as an essential ingredient in a young woman’s recipe for happiness, the role that a father plays in his daughter’s life is receiving more intense scrutiny than ever. Modern society is in a state of flux that frequently clouds issues regarding friendships, family life and social interactions, areas especially critical in the lives of young people. As a stabilizing force in this environment, a dad can be the foundation upon which his daughter’s happiness is built.

What does it take for a dad to do it right?

The most important element in the process of relationship-building is time. In her book, Strong Fathers, Strong Daughters, Dr. Meg Meeker writes that “fathers inevitably change the course of their daughters’ lives—and can even save them.  From the moment you set eyes on her wet-from-the-womb body until she leaves your home, the clock starts ticking. It’s the clock that times your hours with her, your opportunities to influence her, to shape her character, and to help her find herself.”

To maximize opportunities to sustain a close relationship with his daughter, a committed father takes an active role in every aspect of her development. The process begins with baby care—diaper changes, middle-of-the-night feedings, trips to the pediatrician–all tasks that moms have traditionally assumed. Dad can utilize the toddler stage to teach his little girl new things and introduce her to unique experiences, from sunsets to visits to the zoo. Continued teaching opportunities, coupled with guidance, discipline and respect, mark the elementary school years. As time passes, if a father successfully adjusts to the difficult adolescent stage–when his daughter invariably pulls away from him—and he learns to listen with empathy to her worries and concerns, then the relationship should emerge from the turbulent teens stronger than before. Finally, when she enters early adulthood, dad’s role evolves into one of mentor and trusted advisor to his grown-up daughter as he offers her his lifelong support.

When dad prioritizes his time and puts his daughter at the top of the list, he sets the stage for effective relationship development and maximizes the potential to influence her life in significant ways. Although a quantity of dedicated minutes, hours, days, months, and years is certainly a requisite for successful bonding to take place, it is the quality of interaction between father and daughter that determines the ultimate results. The idyllic portrait of his daughter and himself that a dad attempts to paint on life’s canvas requires several key elements. Wilhelm Busch understates the requisites of this creative process with the observation:

“To become a father is not hard,
To be a father is, however.”
—The Harper Book of Quotations, Robert I. Fitzhenry, Editor

The following tenets demand attention if a dad is to waltz smoothly through his father-daughter dance. 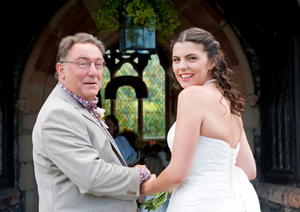 When they turn to their dads, daughters look for role models that demonstrate leadership, masculinity, strength, and integrity.  They should see the kind of man that would be a good choice for them to marry.  Husbands need to demonstrate healthy, loving relationships with their spouses so their daughters learn what to expect from their own future partners. “What all this means for a father,” according to Dr. Marie Hartwell-Walker, author of Daughters Need Fathers, Too, “is that he counts. He counts a lot. A father’s relationship to the world and to women sets down a template that will be played out for another generation. You are the model for manhood your daughter is likely to look to when she starts to date.”

Michael Austin, editor of Fatherhood—Philosophy for Everyone: the Dao of Daddy, adds, “How Dad approaches life will serve as an example for his daughter to build off of in her own life. What matters in the father-daughter relationship is that Dad seeks to live a life of integrity and honesty, avoiding hypocrisy and admitting his own shortcomings, so that she has a realistic and positive example of how to deal with the world.”

A daughter craves a hero in her life. 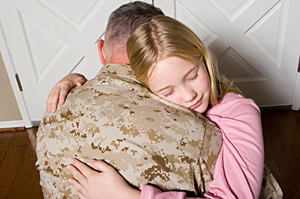 The path that a girl follows from birth to adulthood winds amidst a multitude of tangles and snares. Daughters need their dads to lead and protect them along the way, to become their heroes. This role involves providing a shield against all forms of harm and abuse, physical and otherwise. A father’s strength is required for him to erect the fences, to establish the rules and boundaries within which his daughter will thrive; and to defend his stances with grit and persistence when his authority and wisdom are challenged. Daughters need to grow up secure in the knowledge that their dads will not back down when it comes to issues affecting their safety and welfare.  Meeker describes the heroic nature of a committed father when she writes that a daughter “needs a hero to navigate her through a treacherous popular culture. Daughters want heroes —and they choose their dads … Heroes protect people— they persevere, they exhibit altruistic love, they are faithful to their inner convictions, they understand right from wrong and act on it … Being a hero requires tough stuff. It requires emotional fortitude, mental self-control, and physical restraint. It means walking into embarrassing, uncomfortable, or even life-threatening situations in order to rescue your daughter.” 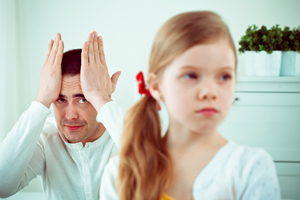 The surest way for a father to come to know his daughter, and thereby strengthen his relationship with her, is for him to listen to her as she expresses her hopes, dreams, fears, and uncertainties. Easier said than done! How many times a day across the face of the earth are befuddled dads hearing the same complaint from their frustrated daughters: “But daddy, you’re not listening to me?” In his article, “Strengthening Father Daughter Relationships,” which appears in About.com Guide, Wayne Parker discusses the importance of fathers tuning into their receptive channels.

“What a dad can do to build his relationship with his daughter is to listen more. Pay attention to what she says when you are together. Listen to what she is thinking, dreaming, and wishing in her life. And most of all, keep confidences. When she shares something with you that is private and bares her soul, don’t repeat the story. It is one sure way to hurt your relationship when you violate a trust.”

It’s easy for a dad to discuss with his daughter the Steelers’ chances of making it to the Super Bowl, or the Pirates’ incredible losing streak. His most recent triumphs on the golf course or tennis court are also frequent choices when it comes to conversation pieces. Her efforts in school—or lack of— can always be pulled from the hat when conversation is on the wane. However, when a dad utilizes the “captive audience” arena to shed excessive light on his own interests and accomplishments, or to lecture his daughter extensively on her perceived academic or personal shortcomings, counter-productivity results, poisoning the relationship. The best antidote for a father’s toxic lecturing is controlled doses of listening to his daughter administered over an extended period of time.

Substitute “words” for “letters” in Donne’s observation and the essence of a healthy father-daughter relationship emerges. When it is time to respond to his daughter, the words with which a dad addresses her, either spoken or written, ultimately determine the quality of the relationship between them. Positive words, nurturing expressions, affirmations – these are the building blocks of trust, and the foundation of a young woman’s self-esteem and self-confidence. If a father consistently expresses his love for his daughter, his trust and his pride in her, she in turn will come to believe in herself based upon his assessment. After all, her dad is her hero, her protector, and her friend. His words must be true.

A father’s words should also reflect his respect for his wife and for women in general. This respect will automatically transfer to his daughter, and she will learn to expect the same from the men who walk in and out of her life. If a dad’s goal is to convince his daughter that she is strong, good, competent, loved, and respected, then his efforts will validate the opinion of Thomas Fuller, who maintained that “Soft words are hard arguments.”