Four friends who share a passion for children’s nutrition and health pooled their efforts and their money and created what’s called a “giving circle.” Jennifer McDowell, Lisa Markowski, Lea Anderson and Joyce Salls, three women from the South Hills of Pittsburgh, officially launched Giving2Grow in December of 2013 and last year they gave their first grants to two nonprofits in Pittsburgh. The first meeting drew 28 attendees and in just a year and a half, Giving2Grow grew to 61 members.

The concept is simple: each member gives $500, and as a group, they vote on which organization should receive the funds. Members can be as involved as they like; they can join committees and work with the leadership of Giving2Grow, or they can simply add their money to the pot and vote on where it’s allocated.

The organization started in 2005 thanks to three urban farmers. The Edible Schoolyard program is one of several garden projects it runs in Pittsburgh. Some farms are run with volunteers, and in the summer, several apprentices, who learn about the technical details. The vegetables grown on site are sold to the community at a weekly farmers market. Grow Pittsburgh also runs a greenhouse and has recently expanded its Edible Schoolyard program to include “Affiliate Schools,” a more self-sustainable curriculum in which school administration and staff are taught how to run their own gardening program, as opposed to the time-intensive initial flagship program. 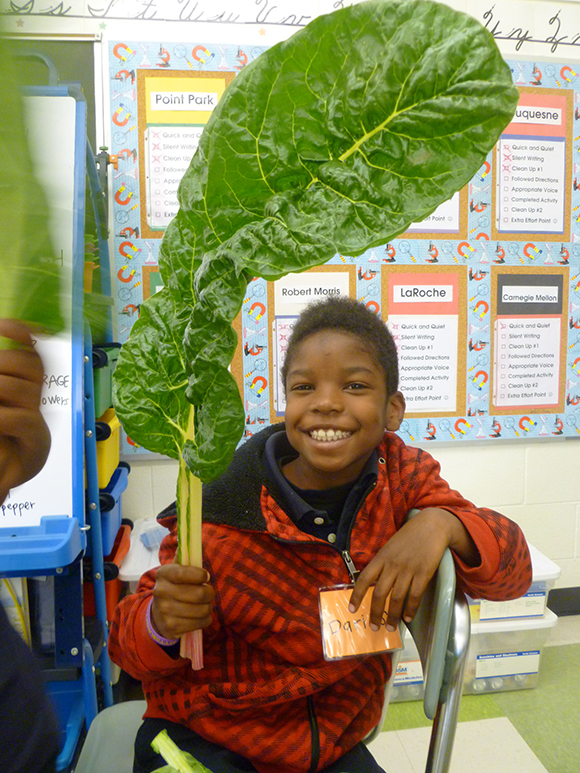 The kids are thrilled to have gardens at school. “Some kids have never been to a farm and the fact that a carrot grows under the ground is a real shocker,” says Julie Butcher Pezzino, Executive Director of the organization. The gardens are a learning tool, she says, with connections to science and myriad other subjects. “It also proves kids an opportunity to learn in a physical, hands-on way,” Pezzino says, “And with an increase in tests, kids are sitting and spending less and less time outside.” The program also covers the benefits of healthy eating. Pezzino says the reactions from kids and teachers alike have been “extremely positive.”

Rainbow Kitchen’s Kids Café, an afterschool meal program for low-income communities, also received a grant from Giving2Grow. Donna Little is the organization’s executive director and she says that for many who live in the neighborhoods they serve, “it’s a real challenge to feed their family.” Rainbow Kitchen saw a huge increase in need in the 2008 recession. “Life takes a turn and suddenly everything’s different,” says Little, and explains that so far, the people they serve haven’t gone through a recovery. Rainbow Kitchen delivers approximately 60 kids’ meals to their long-standing program in Mon View Heights, and roughly 50 more to other programs in the city. “We don’t want kids distracted by hunger and discomfort after school,” says Little. “Their bodies are trying to grow.” Rainbow Kitchen also runs a breakfast program for elderly, homeless and the mentally ill, a Food Pantry program in five different communities and their own farm stand in the summer. McDowell, president of Giving2Grow, calls the volunteers “dedicated ladies.” Before voting, members of Giving2Grow visited both locations.

“Our biggest challenge is raising money; it’s constant,” says Little, “We’re so pleased that we’re able to have this partnership with Giving2Grow and I really admire what they’ve done.” For Rainbow Kitchen, they need both large grants as well as small to survive; “It all adds up.” Their primary income generator is an annual Walk ‘n Ride Against Hunger, in early June. Little says the organization’s biggest accomplishment is existing for 30 years. “We’re a small, community-based nonprofit, founded in 1984 when the mills closed. Originally, these programs were to be temporary. But the help we provide is needed just as much as it was then.” They’ve stayed afloat with the help of a committed staff and inter-community support and cooperation and have recently begun a program that delivers meals to food-insecure seniors, as well.

Salls of Arden Road is the treasurer for Giving2Grow and appreciates the “grassroots giving part of it.” Helping smaller organizations, becoming involved in the process and addressing the local need in our own communities inspired her. “It’s amazing what you don’t know about in your own community,” she says, and appreciates that Giving2Grow also breaks her isolation from the rest of Pittsburgh.

Salls says, “I’m thrilled to see what we did in our first year.” Her dream is to see the giving circle grow, be able to allocate more money to more organizations and continue to make a difference in Pittsburgh. “It’s really cool to see what can happen when you get together for a cause. It’s incredible.”

If you’re interested in becoming involved with Giving2Grow, they will meet May 18 from 7 to 8:30 p.m. at Southminster House (at the corner of Washington Road and Castle Shannon Boulevard). It is open to anyone, not just Mt. Lebanon residents. For more information, visit the website or contact info@giving2grow.org.
Related Stories