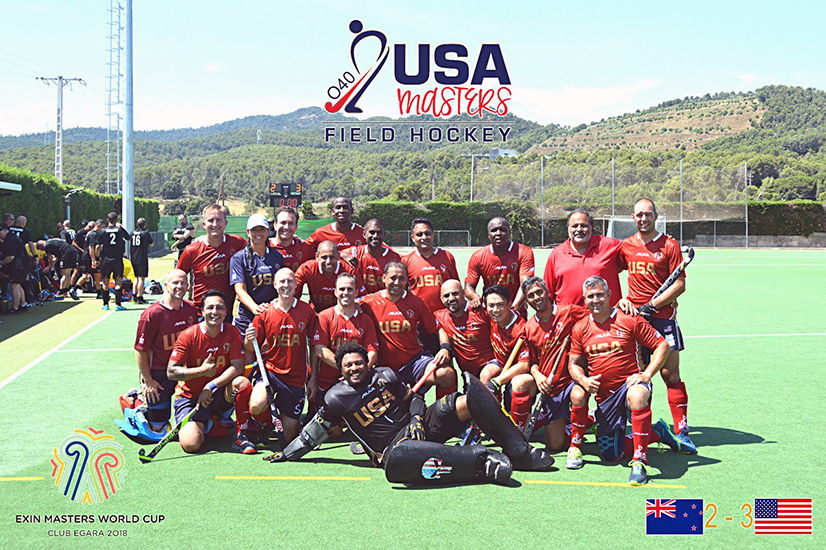 Over recent decades, it has been a familiar pursuit for women to strive to gain footholds in sports that traditionally have been associated with or accessible to men. Kevin Tan is working the other side of the equation. He likes spreading the word that field hockey is for men, too.

Tan, of Sunset Hills, grew up in Malaysia playing field hockey. That’s one of several parts of the world where that sport is popular among both genders. In America, it has long been considered a sport primarily for girls and women. “Hopefully, down the road, perceptions will change where field hockey will be a little bit more regarded as a sport for both men and women,” says Tan.

The pinnacle so far of his playing career came last summer when he represented the United States on the over-40 men’s team at the Masters World Cup in Barcelona, Spain, his first time playing at the international level. He also plays, promotes and coaches locally. He’s a coach and player with the SteelStyx coed adult club team and leads the nonprofit youth Team Golden Triangle Field Hockey Club, which operates year-round with age-group teams ranging from under-12 to under-19.

Tan, a midfielder and forward, played a lot at the Masters World Cup. The U.S. over-40 team was ranked 13th out of 15 nations going in.

“Internally, we were shooting for a top-eight finish, but we ended up at No. 6,” Tan says. “That was one of the highlights for the U.S., I guess. The fact that we did as well as we did surprised some of the other nations. The women’s national team does pretty well. But the men’s, with the fact that we don’t play here, that turned some heads. That was nice. I’d never been part of something like that. It was a wonderful experience. As soon as it ended, we basically were all talking about the next one.”

He was a 40-year-old on a team that was heavy with players in their early 40s–many of them, like him, who got the field hockey bug while growing up in other countries. Tan hopes the core of the roster will return for the 2020 Masters World Cup before some of them start aging into the over-45 age group. The tournament is held every other year.

His most memorable moment in Barcelona was a sharp-angle goal—a shot from from close to the end line—he scored that stood as the winner as the Americans beat South Africa 3-1.

Shawn Hindy, a teammate of Tan’s in Barcelona and the athlete representative on the USA Field Hockey board of directors, called Tan “the fastest player on the team.”

Hindy is from Southern California and had the opportunity to play club field hockey growing up. He has been a part of the national team program for 16 years. Although men’s field hockey is an Olympic sport and is popular in various parts of the world, Hindy and Tan say in the U.S. it is found mostly in certain pockets. “To me, it’s always going to be a niche sport” in America, Hindy says.

Tan says in the U.S., not only does organized men’s field hockey lack much of a presence, but boys and men also face a stigma because of the perception that the sport belongs to women. He believes anyone who tries it will realize it’s a great sport for anyone.

It’s played mostly on artificial turf, 11 players a side. Alignments, positions and strategy overlap with soccer and ice hockey. With the popularity of ice hockey around here, thanks to the Penguins, Tan follows and has tried that sport, but the skating trips him up.

“The stick work and hand-eye coordination, I’m OK. Ask me to stop on a dime and skate backward, that’s the problem,” he said with a little laugh.

The SteelStyx play year-round at Winchester Thurston High school on an outdoor turf field and in an indoor facility. Lorrie Kiger and her husband, Brett Andrews, of Squirrel Hill, play. Kiger, like Tan, has had the field hockey bug for years. She loves the teamwork and the high energy.

“We always wear our Fitbits, and we end up running four or five miles during the course of a game,” Kiger says. “It’s a great way to get exercise.”

The SteelStyx has grown and now travels to regional tournaments and occasionally scrimmages the Pitt club team, although the team is always looking for new members. Check out their Facebook page for information.

Kiger credits Tan’s influence and coaching skills for SteelStyx’s growth. In fact, she considers him the glue that holds the local field hockey scene together. “He’s made a huge impact on youth hockey and also the adult game here in Pittsburgh,” she says.

Tan, a Geneva College graduate who works as a project manager and structural engineer with GAI Consultants in Homestead, keeps trying to promote the sport in his spare time. In addition to the aforementioned endeavors, he’s involved in helping Duquesne University start a club team.

At home, Tan’s wife, Jennifer “dabbles” in field hockey, he says, but is “super supportive.”

“We have four kids, three boys and a girl,” Tan says. “It’s a little bit harder for the boys to be encouraged to play when they don’t see their friends playing, but all of them have held the stick from early on. We’ll see. I’m still pushing.”