Run up five stories with a folded hose on your back. Hoist a coiled hose up those same five stories. Race down. Chop a steel beam. Run 125 feet in a serpentine pattern around fire hydrants. Drag a charged hose (one with water in it) weighing 200 pounds and hit a target with a stream of water. Grab a 175-pound mannequin and drag it to the finish line. Oh, and don’t forget you’re a wearing full set of firefighting equipment. Exhausted yet?

Whoever nicknamed the Firefighter Combat Challenge “the toughest two minutes in sports” certainly wasn’t joking. Chris Cerci, a career firefighter with the McKeesport Fire Department and a part-time Peters Township firefighter, is a well-known competitor in the sport. He completes the course in less than two minutes. 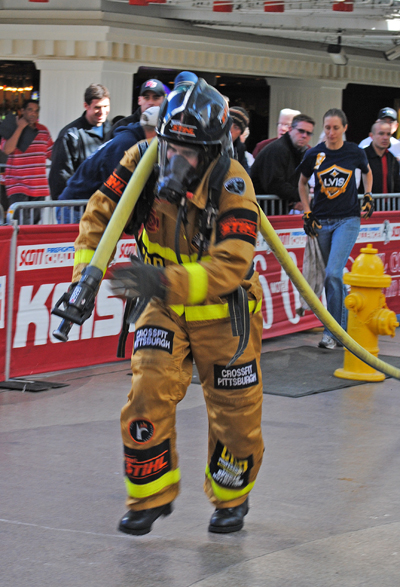 Cerci, a resident of Crystal Drive, says the competition is “one of the most difficult things I’ve ever done in a short amount of time.” He adds that the fun starts when he crosses the finish line.

The sport is broken down into three categories: individual, tandem and relay competition. Individual competitors run the entire course alone. In tandem competition, two athletes divide the course in half. Groups of three to five people can run the course in the relay category.

Cerci usually competes individually, but occasionally runs tandem. “The individual event you never get used to. It is 100% mind over body,” he says.

Cerci doesn’t compete to win titles or be nationally ranked, although he has both. He participates to improve his health and fitness in order to become a better firefighter. 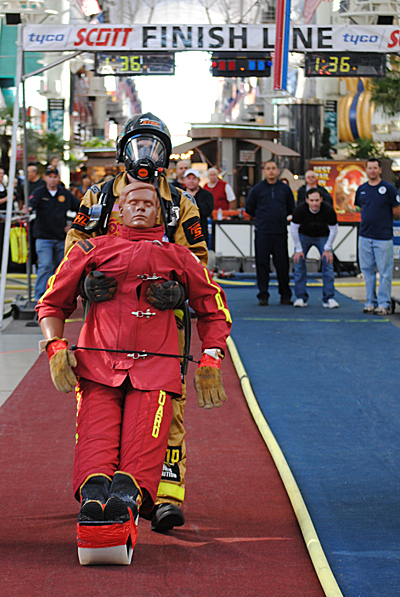 The skills required to excel in the Firefighter Combat Challenge are also those that make a good firefighter. Cerci’s competition training consists of cardio exercises and Olympic-style weightlifting, both of which require him to “train 150% for three to five minutes.” Thanks to this training, Cerci does not get fatigued on fire calls and recovers quickly.

Cerci is the 2007 U.S. Grand National Champion. He placed third in 2009 and fourth in 2010 at the national competition. Cerci, also, won numerous regional titles throughout his career thus far.

Draeger, a global manufacturer of safety and medical equipment, recently awarded Cerci a sponsorship for the 2013 season, which runs from April to October. One of the company’s products, the self-contained breathing apparatus (SCBA), is an essential piece of firefighting equipment. Cerci hosted a webinar for firefighters on Draeger’s behalf. When the company discovered he competes in Firefighter Combat Challenges, it decided to research the possibility of sponsoring him. Nathan Mancine, Draeger’s strategic product manager, coordinated the sponsorship. Cerci says a sponsorship in the sport is unheard of and he is very grateful for Draeger’s support.

Cerci is the only athlete to receive a Draeger sponsorship and the company is the first SCBA manufacturer to sponsor someone in the sport, according to Mancine. The sponsorship covers Cerci’s expenses for this season’s and next’s competitions.

Mancine is “excited about what this opportunity means for Chris and Draeger” and “thinks it is going to be a great partnership.”