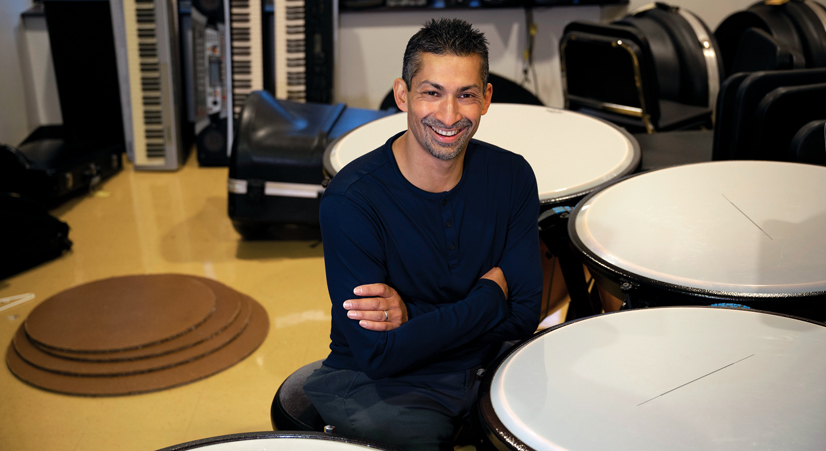 Percussionist Subha Das is the principal assistant director of the nationally recognized Mt. Lebanon Percussion Ensemble.  He joined the program in the Fall of 1999 after graduating from Duquesne University’s school of music. In addition to teaching, he is an active member of the Pittsburgh music scene. Not only was Subha a founding member of the Olga Watkins Band (2003-2021), but he currently performs with Steel City Calypso and with many Pittsburgh musicians in a variety of genres, from rock to jazz, as well as musical theatre productions in the cultural district.

What made you want to start playing, and what keeps you going now?

While growing up in the ’80s and ’90s, I was drawn to rock music. At the time, the MTV channel was popular. As soon as I would get home from school, I would sit down in the living room and play along to the “Top 10” videos of the day by making a drum set out of newspaper stacks and hitting them with my mom’s wooden kitchen utensils.

What keeps me going is understanding the fact that I will never learn everything I want to as a musician. So, every second is precious while I’m on this planet to gain as much knowledge as possible.

My teaching has influenced my practicing/performing in a positive way. Working with students of all ages and skill sets has made me put my own playing under the microscope even more so, the older I get. I always tell my students, “I’m 10 times harder on myself than I am on you.”

My playing has influenced my teaching in a way that I can share real life experiences such as: musical revelations during my own practice sessions, what I’ve learned from my own performances, audition advice, information regarding the music business. I believe being able to share this information with students will help them achieve their goals.

You play a wide variety of musical types and styles. Do you have a favorite?

I don’t necessarily have a favorite. I respect all styles of music and am open to learning them. I don’t want to be classified as a particular type of musician. I just want to be known as a musician, period. Music evokes a very emotional feeling in most of us and I truly just try and enjoy every moment of every performance by trying to get “inside” it and connect with both the music and listener.