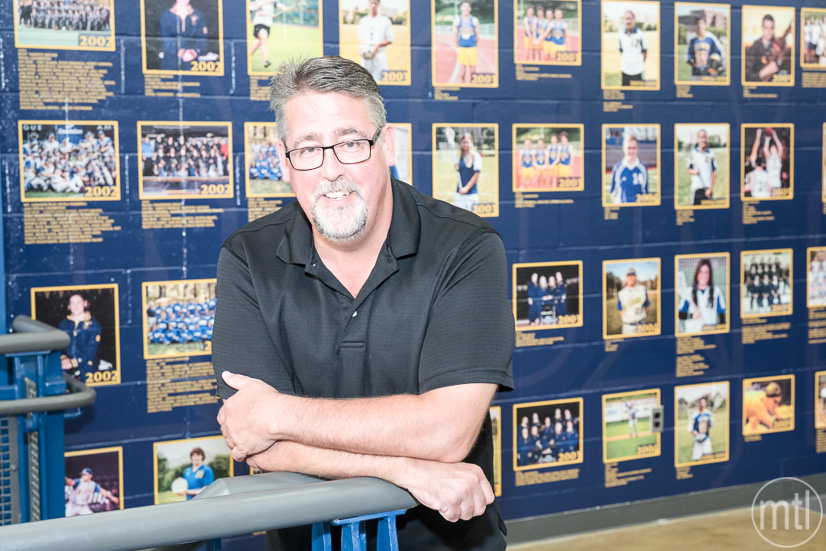 Dr. Robert Schilken, Northridge Drive, is a surgeon with Allegheny Orthopedic Associates specializing in sports medicine. He is team physician for the Pittsburgh Pirates and a number of area school districts. A three-year starter for the 1979-1981 Blue Devil football teams that won two WPIAL championships, Schilken was a Parade All American and an All State and All Conference player. On Pitt’s team from 1982-1985, Schilken played in the Fiesta and Cotton Bowls and received the Blue-Gold Award for Academic Achievement his senior year. Schilken received the Mt. Lebanon High School Great Alumni Award in 2010. He and his wife, Dolores, have two daughters, Alex and Meghan.

Playing high school and college football is hard work and can take a toll on your body. What did you gain from football, and would you do it again? Yes, playing football does take its toll on your body. Luckily, I had only minor injuries during my career. Now, as a sports medicine physician, I see injuries ranging from simple overuse injuries to more complex injuries such as ACL tears and concussions. On the plus side, playing football taught me how to manage my time efficiently. My grades were always better while in season. I made a lot of friends during my playing years as well. I also got to see what an orthopedic surgeon team physician did and knew that this is the type of doctor I wanted to become. I certainly would do this all over again. I enjoyed my time playing, learned a lot along the way, and playing football helped me become what I am now.

How do you feel about the reluctance of some parents to allow their kids, especially elementary and middle school aged, to play tackle football? This is a very challenging question. Football is considered a collision sport, and injuries will occur, as in any sport. Proper coaching techniques, in my mind, will help to reduce many of these injuries. In my specialty of sports medicine, research is ongoing in the evaluation and prevention of injuries. But further research is still needed to improve the safety of football. I certainly understand parents’ concerns over injuries. I also understand the desire to participate in football. I think with proper coaching, techniques and common sense, playing football in a developing child can be safe and fun.

What makes a good coach? Can you share a memory of something important you learned from one? Obviously, a coach should be knowledgeable in his or her sport. A good coach is someone who can identify a player’s weakness and improve upon it. But a great coach is a person who not only teaches the sport but also is interested in the person beyond his or her athletic abilities. These coaches make you strive to be a better player but also serve as a role model for the rest of their players’ lives. I really don’t have a single life-changing memory. (Many funny ones). I think my memories/traits/lessons of coaches have all blended together to become what I think a great coach should be.

Why did you decide to get involved with the Hall of Champions at the High School and the November 25 fund-raiser for the Hall? Athletic Director John Grogan asked me to come to a meeting—I didn’t really know what I was getting into. John told the committee—a diverse group of people including former Lebo athletes, teachers and coaches—about his idea of recognizing past and future inductees to the Hall of Champions. So, the brain storming began. Stacey Franklin began taking notes (and eventually leading the committee), and so the Hall of Champions banquet took shape. I think this will be a great way to reconnect with former teammates and athletes from different eras, to get to talk to coaches I haven’t seen (or been yelled at by) in a long time. It’s also a great way to support Mt. Lebanon athletes and their accomplishments and to continue to help our athletes achieve greatness through fund raising for further projects, all the while having an enjoyable night with former teammates…and friends. GO LEBO!