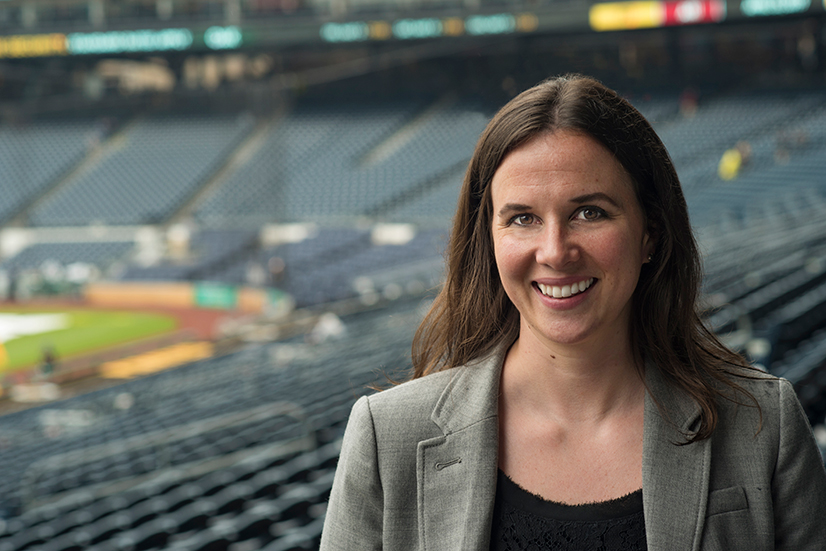 Hali Dougherty-Brill loves the game of baseball and has been a Pirates fan her whole life. Born and raised in Mt. Lebanon, Dougherty-Brill grew up believing that “If it’s springtime, it’s time to play softball.” Landing a job with the Pirates after working there as a college intern was a dream come true. A 2007 graduate of Chatham University with a degree in communications and marketing, Dougherty-Brill has held various positions with the organization. Currently she is the manager of PNC Park events, selling and managing everything from weddings, corporate receptions and meetings to field events. She enjoys the position but she has not abandoned hope that someday she’ll get called in to play shortstop.

What’s your best day at work?
Every day can be so different, which is what makes the work exciting for me, but I’d have to say two of my most memorable experiences were working the 2006 All Star Game and more recently, in October 2017, when the Pirates teamed up with the City of Pittsburgh in a relief effort for the people of Puerto Rico after Hurricane Maria. We collected and shipped 450,000 pounds of supplies to the island. Experiencing the sincere generosity of the people in our beautiful city up close was uplifting.

What’s the most unusual request you’ve gotten?
A fan once called me and asked if he could borrow the Parrot costume for Halloween. Another unusual request, which actually happened to a colleague but certainly is worth reporting here, was the time we received a call from a fan who was going to be late for the game asking if we could delay the start time just a little bit until she got there.

Does your work bring you into contact with the ballplayers? Do you have a favorite?
I don’t work very closely with the ballplayers at this time, but my favorite current player is Francisco Cervelli. I love the passion and energy he brings to the team and to the game each and every day.