All pet owners know the feeling: You are sitting on the couch watching TV, and you realize your pet isn’t cuddling next to you as usual. First you think, “Where is Fluffy?” Then, as you search your house, your thoughts snowball from mild concern to complete panic. “Did Fluffy slip outside when I was bringing in the groceries earlier?” “Is Fluffy smart enough to find her way home?” “How will I live with myself if I find her on the side of the road?!”

It happens at least twice a week in my house. Luckily, I always find my cat hiding, usually in my husband’s closet under his work shirts, spooked by some noise outside that I didn’t even notice. For some people, the panic is justified because they truly can’t find their pet. Then, they can only conclude that Fluffy actually did slip outside and now she is out in the world, alone and lost.

My friend Ryan became one of those people last month. He and his fiance had just moved from Friendship into their new home in Swissvale. All was well with the world until they went back to their Friendship apartment to pack up their cat and realized, to their dismay, that Freddie was nowhere to be found.

Ryan immediately took to Facebook, and the ensuing weeks were filled with worry and heartbreak—but also hope. His Facebook updates about Freddie received hundreds of shares, more than a thousand likes and resulted in dozens of people on the ground searching for him.

Two things struck me about Freddie’s story: 1) It is universal. We receive at least one visitor post per month on our Facebook page from a Mt. Lebanon resident who is searching for their lost furbaby and 2) Ryan handled this situation in a way that can and should be replicated.

So here it is: the story of Freddie’s great adventure, as told through screenshots of Ryan’s Facebook updates (with his permission, of course). I have also compiled a list of resources for cat and dog owners in Mt. Lebanon who find themselves in a similar situation. Click here or scroll to the bottom to go directly to the resources. 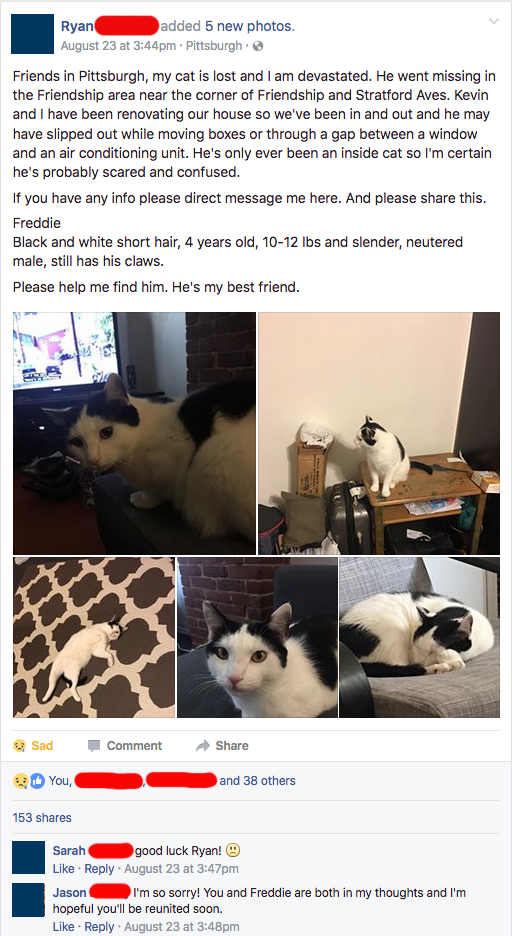 As soon as Ryan realized Freddie was missing, he posted on lost cat Facebook groups in the area, called local shelters and vets, and hung posters around the neighborhood… 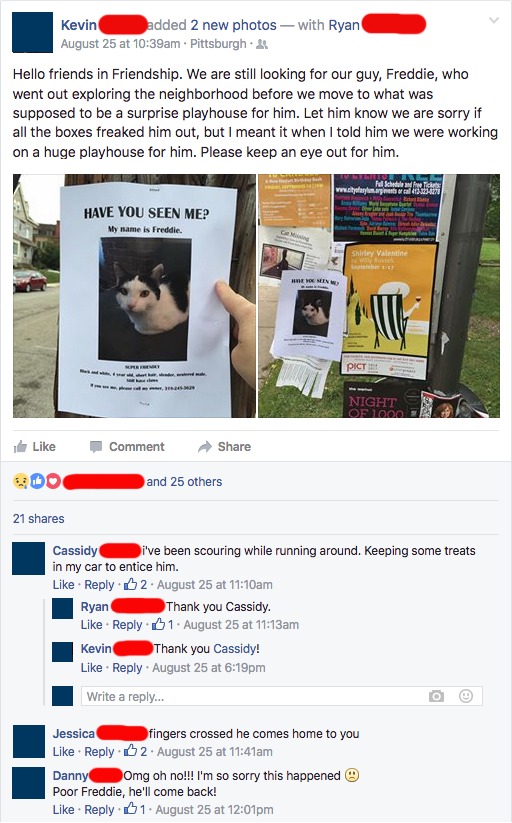 Ryan finished moving in to his new home three days after Freddie went missing,
but there is still no sign of him. 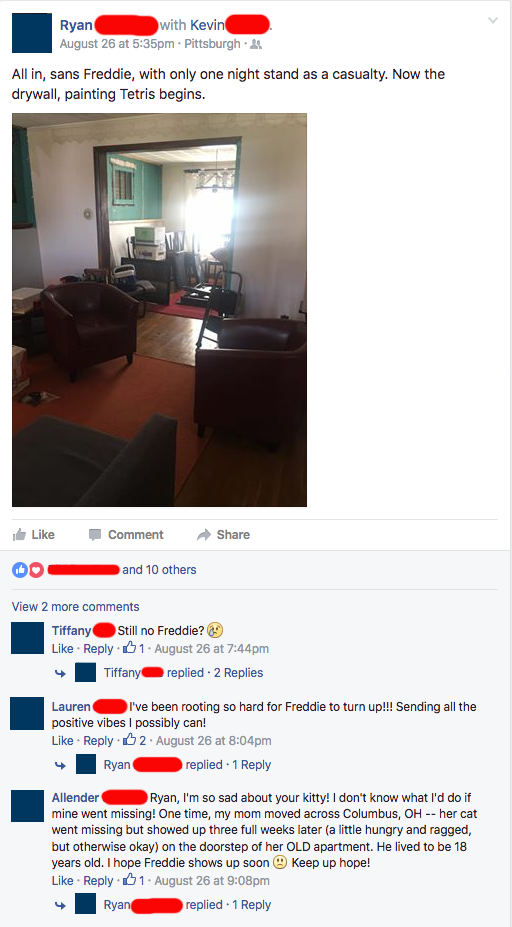 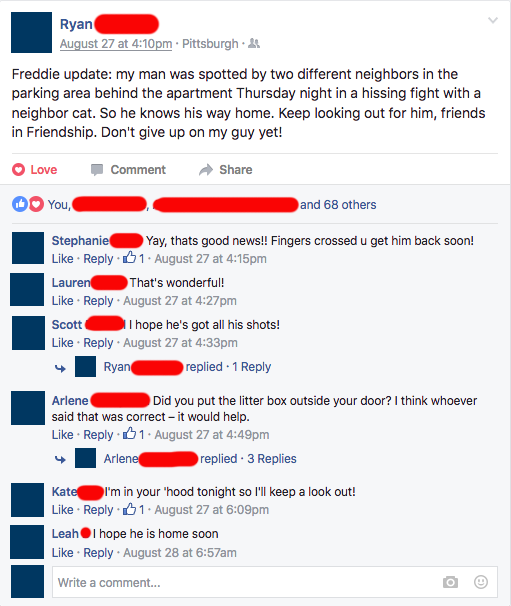 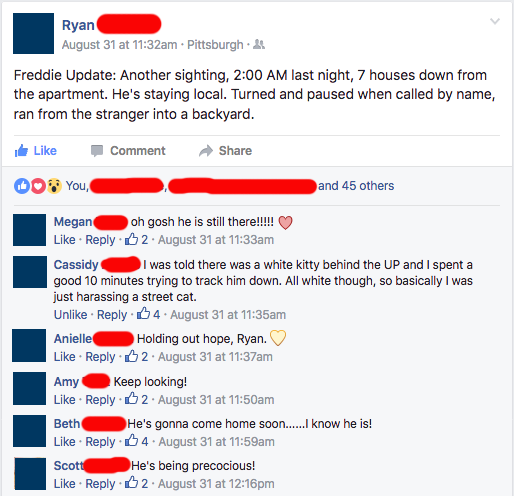 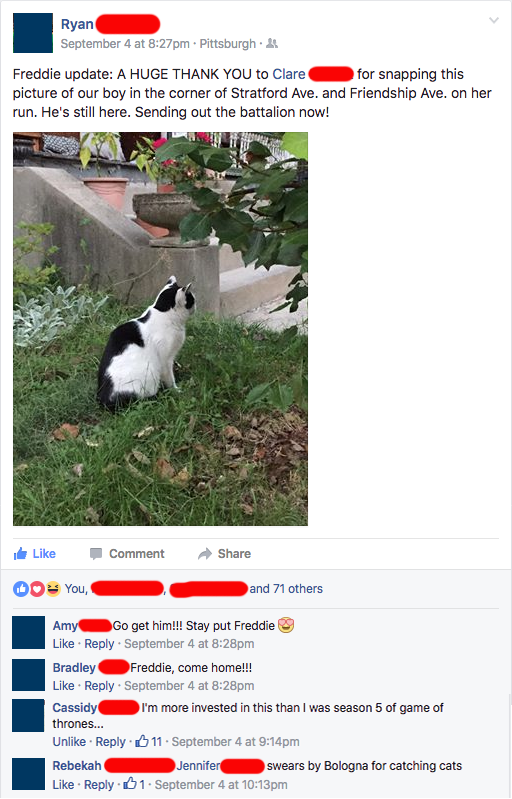 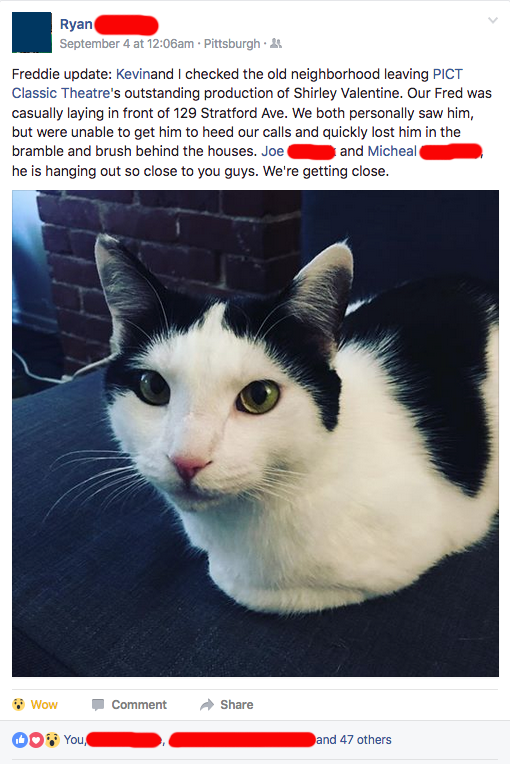 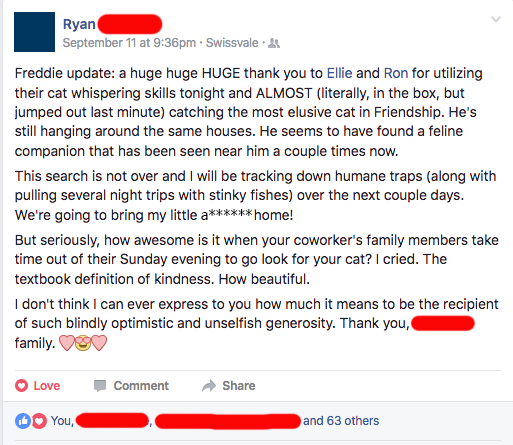 20 days after Freddie initially went missing, Ryan’s old neighbor called him to report a Freddie sighting. The neighbor put out tuna for him while Ryan raced to Friendship… 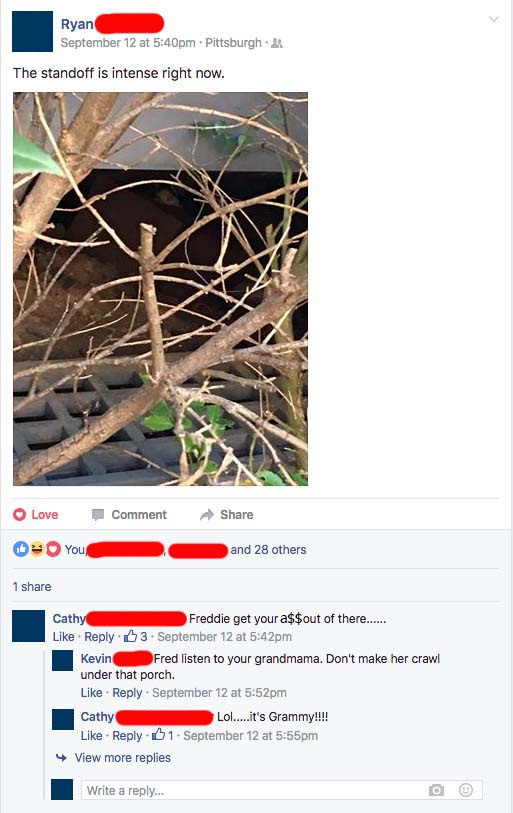 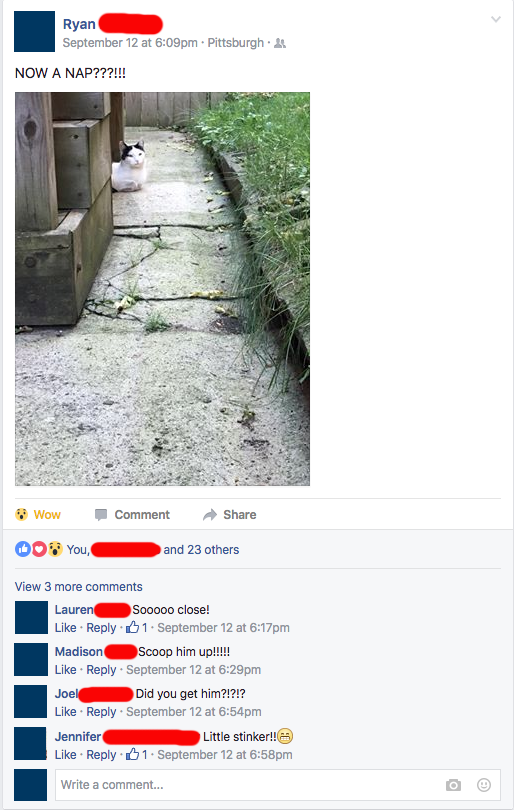 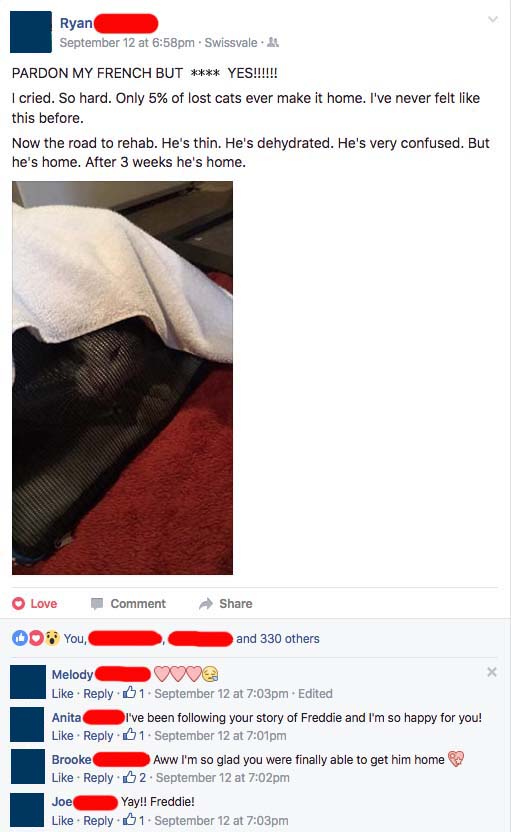 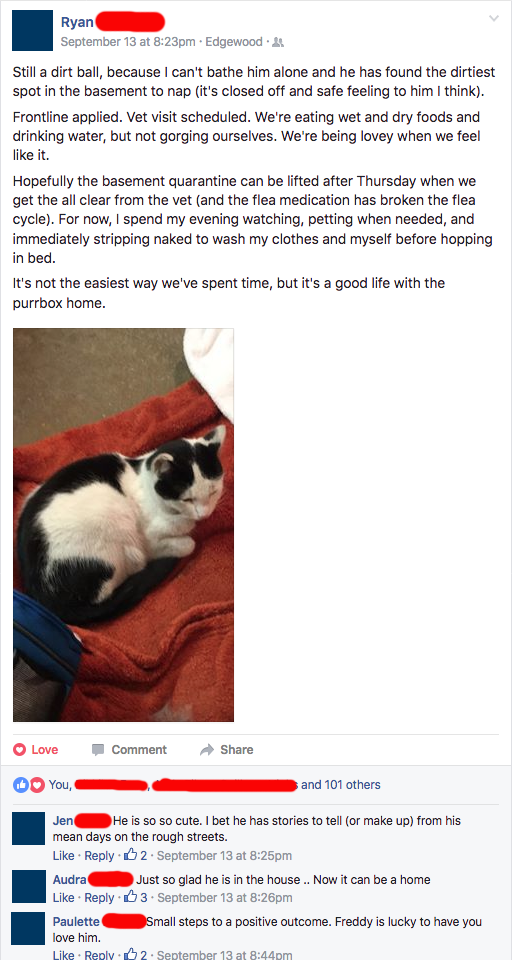 A week later, Freddie has settled in. 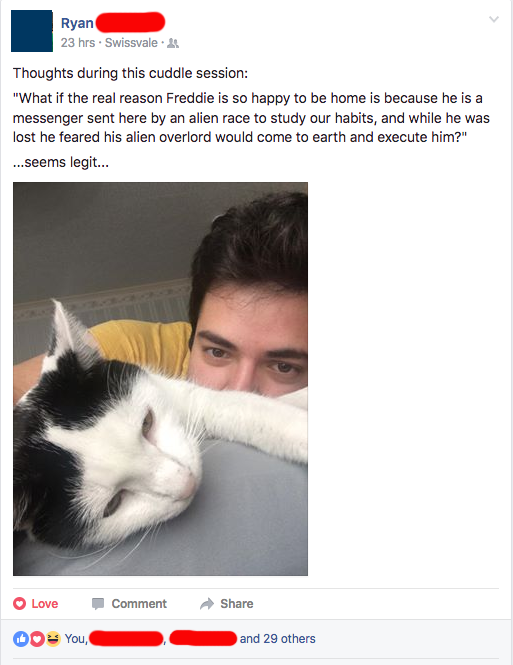 About having Freddie back, Ryan says, “When Freddie went missing, it was everything I could do to hold out hope that he would return. I was lucky to have a supportive group of friends who all offered their help and who reminded me to keep looking. Ultimately, it was their efforts, and the kindness of strangers through social media and the Friendship community, that lead me back to him. If anyone is out there going through a similar situation—don’t give up. Knock on doors. Hang flyers. Have conversations with your neighbors. Contact any and all shelters and vets in your area. Just like Fred, your furbaby could be hiding right under your nose. And just like me, you might have a neighbor kind enough to use their own food or resources to keep him close until you can get to him.”

Your pet is missing in Mt. Lebanon. What do you do?