We often see news clips of gamers lining up at Game Stops and Walmarts to pick up the latest Assassin’s Creed or Halo video games.

But what about the people who can’t seem to give up their passion for hitting those little buttons on their good old Game Boys?

Miller, owner of Betsy’s Ice Cream on Washington Road, and Hecklick, a financial consultant, design new games for old consoles like Nintendo and Super Nintendo. They call their business Retroscribe.

The two began batting around ideas to bring vintage gaming to more people. “There’s a decent underground community of people who make these games but I always felt that they were too niche and didn’t really get out to the masses,” Hecklick says. “We decided to make simple, fun, well-executed games that could reach the masses.” 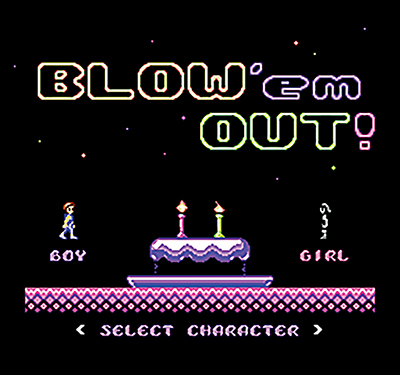 The games are simple. Hecklick and Miller—who have been buds since the third grade—and two game designers who work with the two on a contract basis, designed the games thinking they would make great gifts. “The plan was to create games based on holidays, birthdays, special occasions,” Hecklick says.

The two run Retoscribe out of a workspace connected to Betsy’s. Once Hecklick and Miller come up with an idea for a game it takes the team six to eight weeks to design the game and have it ready for online purchase. “Most of the time is spent hashing out the mechanics and the idea of how the game will work,” Hecklick says.

In the coming weeks Hecklick and Miller hope to give customers the option to customize the birthday game. Buyers will be able to send Retroscribe a picture of the person they intend to give the game to. Then Hecklick can design a game character that looks like that person.

Buyers will also be able to to personalize the birthday message at the end of the game.

While both men come up with ideas for the games, Hecklick is the more hands-on of the two. He’s an avid gamer and participates in the design and mechanics of the games. Miller is more of a casual gamer, but with his background in business he helps market the Retroscribe products and search for new avenues of growth.

“It’s a departure from my day-to-day, running Betsy’s,” Miller says. “The games are going out to people all around the country and the world. There are people in England playing our games.”

So far the Retroscribe team has released two games and will release a third one shortly.

“We’re riding the wave of this retro video game fad and bringing those classic games back to the forefront,” Miller says. “We’ll see where we can evolve from there.”