There is something wonderful about getting dirty and doing hard work to benefit someone in their greatest time of need,” says Mt. Lebanon volunteer firefighter John Lufburrow. “It’s very fulfilling.”

Mt. Lebanon Fire Chief Nick Sohyda knows exactly what Lufburrow, a five-year veteran, means. Sohyda loves to get dirty, and he’ll tell you that the minute you ask why he became a firefighter. But like Lufburrow, getting grimy was just one of the benefits Sohyda found in being a volunteer firefighter for 13 years in Cecil before joining Mt. Lebanon Fire Department. “It was an adrenaline rush.”

Now that Sohyda is Mt. Lebanon’s fire chief, he spends a lot of time in front of his computer doing “chief things,” but when the fire alarm goes off, he still feels that rush, as he steps out from behind the desk, gets on the truck and starts helping people.

He’s hoping to tap that same desire in others by launching the “Get on the Truck” volunteer recruitment campaign for the Mt. Lebanon Fire Department. The combination department has 17 full-time firefighters and 36 volunteers. The goal is to get that volunteer pool up to 45.

“We’re facing a lot of the same challenges that other communities are facing,” he says. “It’s difficult for people to find the time [to volunteer].”

The recruitment campaign will include multi-media video and display ad outreach, tied into a social media contest. To demonstrate the diversity of the group, Sohyda selected six current volunteers—Valerie Christofel (a makeup artist), John Lufburrow (a pharmaceutical salesman), Krister Nielsen (a researcher in astronomy and astrophysics), Chris Brown (an architect), Kenneth Loy (a registered nurse) and William Dougherty (a software writer)—to be featured in the campaign videos and print materials, which will be placed throughout Mt. Lebanon.

Later this month, you’ll see the six turned into full-sized “flat firefighters,” as Sohyda calls them—life-size printed renditions in full turnout gear—at prominent places like the public safety center, the municipal building, the rec center and the library.  Place your QR reader app on the code printed on the large cardboard-mounted photographs and you’ll see and hear short videos of the firefighters talking about why they joined the fire service. The message? If you’re looking for a challenge, want to help your community and think you have what it takes, Get on the Truck!

For specific locations and details, go to www.mtlfd.org.

If you want to become a volunteer firefighter, you’ll need to meet the department’s requirements: Be a resident of Mt. Lebanon, at least 18 years old and a non-smoker in good physical condition. And you’ll have to pass three things: a criminal background check, a medical exam and fitness evaluation.

The fitness test may sound daunting; candidates have 7.5 minutes to complete a course that requires them to: carry 50 pounds of hose up three flights of stairs; hoist 50 pounds on a rope up three flights of stairs; hit a 150-pound beam five feet with a sledgehammer; drag 100 pounds for 100 feet; and drag a 180-pound mannequin 100 feet. Despite the difficulty, the great majority of people pass that test the first time.

The time commitment can also seem daunting, particularly during the first year, which requires about 166 hours of training at the fire station on Thursday evenings and occasional Saturdays.  But those who stick with it say they’re glad they did. 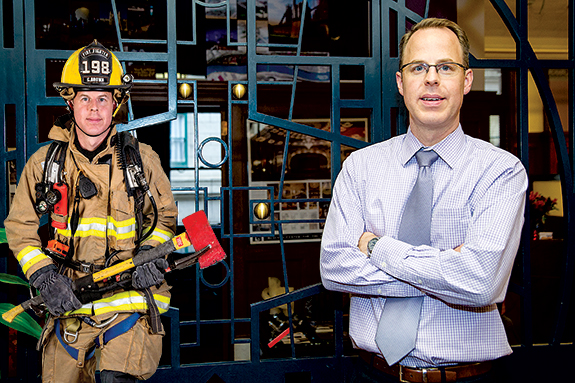 “The initial training takes a lot of hard work, but you also do things that you wouldn’t otherwise get to do: cut open roofs of buildings, break through doors, cut up cars and, of course, crawl through smoke and fire conditions,” says Chris Brown, who has been a firefighter for five years. “All of the training is worth it though, because once you start, it’s a great feeling to get your yellow helmet indicating that you are qualified to go into fires.”

After the initial program, recruits must pass a national certification exam. Once aboard, the volunteers spend about five hours per week on fire department activities. Throughout the year, they must attend 18 Monday evening training sessions, respond to 7.5 percent of the department’s calls (about 8 to 10 a month), attend a minimum of five business meetings and work six overnight shifts.

The volunteers report to the career officers and ultimately, Sohyda, but at fire scenes or the other emergency situations to which the fire department responds, they work as a team with the career officers. At fires, they operate in a smoke-filled, hot, noisy environment carrying equipment, handling charged hoses, operating ladders, and breaking through doors, walls, ceilings and roofs with power tools or sledgehammers.  At accident scenes, they pull victims from vehicles, help provide medical assistance to sick or injured patients and clear hazardous material spills.  On quieter days, they help with training, community events, inspections and outreach activities.

“We have a lot of people who think ‘I just can’t do that,’” Sohyda says. But once they have the training, they really enjoy it. “I don’t like heights, but if you put that ladder there and say ‘You gotta get up there,’ you just do it.  It pushes them beyond their comfort zone. They do things they didn’t think they could do.”

The department comprises people of many backgrounds, including lawyers and architects. There’s not even time to be stressed out. “We train so well that we can’t think about it. What goes on is second nature. It is skill-oriented,” Sohyda says.

“I would have to say my greatest sense of pride is the determination I had when I joined Mt. Lebanon Fire Department,” says Kenneth Loy, who has been here since 2011. “I met some great people, gained amazing friends and have trained very hard to get where I am. I have received my Firefighter I & II [certification], vehicle rescue certification, became an EMT-B and am still looking to continue learning every day. I enjoy being challenged to my fullest.”

Valerie Christofel, who has been a volunteer firefighter for 10 years, five of them in Mt. Lebanon, says although the firefighters refer to the department as a “brotherhood,” she feels perfectly welcome. She says she is expected to work just as hard as the men, and she does. “I played the girl card one time, and they didn’t go for it,” she says. “I’m just one of the guys when I’m there.”

Her biggest regret was not getting involved sooner. “I was 35 years old, I was a single mom with an 8-year-old son,” she says. But she was aware of the commitment, having grown up the daughter of a firefighter. These days, she is married to Mt. Lebanon career firefighter Kurt Christofel, and her son has been a junior firefighter. The whole family understands the commitment and the sacrifice.

“You run out of family dinners because you have a call,” she says, adding that it might be Kurt who dashes out on Christmas morning. “But in the long run, it’s so worth it.”

She works with the department’s Family Assistance Unit, a group of family members of firefighters who step in to help other firefighter families who might need a boost for situations like having a firefighter away at training. In one case, the group has been making meals for a firefighter’s family during one member’s cancer treatment. They also meet socially to relax.

In addition to the emotional rewards, volunteers receive material rewards too. From life insurance to access to CCAC Fire Vest Scholarships, a fully equipped fitness center, social events, a stipend for call attendance, reimbursement for training and a comprehensive annual medical exam are just some of the examples.

Sohyda knows there are many ways of contributing to the greater good in Mt. Lebanon, but when it comes to fire service, “You can’t get a higher form of volunteerism.”

John Lufburrow agrees. “What I love most about volunteering is the satisfaction of giving back to a community that gives so much to me and my family,” he says.

To “Get on the Truck,” get an application at the Mt. Lebanon Public Safety Center, 555 Washington Road, or online at www.mtlfd.org.