A red-haired woman stands up to talk about her ride-along with the Mt. Lebanon Police Department and describes being dispatched to chase runaway chickens, happening upon a three-car crash and some woman’s hemorrhaging toenail. She’s one of 20 students in the Citizens Police Academy, a nine-week course run by Mt. Lebanon Police Cpl. Jamie Hughes and Ofc. Scott Kunz, to educate civilians about police work, their responsibilities and the rules that govern police actions. For this story, I dropped into Det. Joshua Chops’ firearms class.

A front table is lined with mock plastic semi-automatic pistols and assault rifles. The class is headed to the shooting range later, to try their hands at the real deal. And at the beginning of each class, students who’ve recently spent a shift with a Mt. Lebanon police officer are asked to describe their experience.

The room is filled with people of all ages: one class member is still in high school, hoping to get some insight about whether he’d like to become a police officer; several women are wives and moms; one man is retired and in his 70s and another is an Eastern European immigrant and banking professional who’s settled in Mt. Lebanon. Of the diverse crowd, five people raise their hands when Chops asks, “Who has a firearm in your house?” I’m not one of those five people; I’ve shot a rifle at summer camp a few times when I was a kid, but that’s the depth of my firearms experience.

The class begins with safety and jokes, but no jokes about safety. Chops is trying to keep us calm and in control, and he tells everyone, “These [guns] are just tools. They aren’t any different than a hammer, a blender or a cell phone. They don’t do anything you don’t make them do.” Chops is a man of metaphors. Later, he compares the guns to cars, calling the sniper rifle a Mercedes Benz versus what he considers a Honda, the semi-automatic pistol. “Shooting is not brain science. It’s not that hard,” he says. Before the end of our class time, he elaborates on the blender metaphor. “You wouldn’t stick your hand in a blender,” says Chops, describing the proper protocol of handling live firearms, keeping them pointed away from you and downrange, and keeping your finger away from the trigger until you’re prepared to shoot. 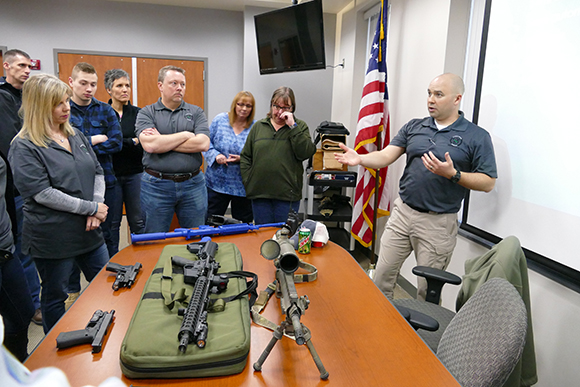 On the projector, the words “Treat all firearms as if they are loaded,” is followed by 10 exclamation marks. While Chops is giving his safety talk, I eye up everyone’s matching “Citizens Police Academy” gear: collared shirts, pens and faux-leather binders with a fresh-looking notepad in front of each person. The Mt. Lebanon Police Association also has graciously provided cookies (along with the aforementioned Academy gear), but the class’ attention is nowhere near the sweets. Eyes are glued on Chops.

After running through the safety protocol, Chops summons everyone to the round table in front of him to an array of supine weaponry: a revolver, sniper rifle and semi-automatic rifle among others. Once the class is clear on the distinction between automatic, semi-automatic and manual firearms, Chops, Kunz and Hughes talk about the different shooting qualifiers and tests that Mt. Lebanon police officers go through as part of their mandatory training.

Three times a year, officers are required to shoot with a passing score of 70 percent. There are no required practice days, only testing; practice shoots are up to the individual officer. The state of Pennsylvania requires only one test a year, but Chops jokes, “We’re Mt. Lebanon. We don’t meet standards; we make them.”

On a serious note, he brings up the need for police to carry firearms and be qualified to shoot, “We don’t retreat. We don’t leave. If we give up, there’s no one else. We don’t get that luxury.” 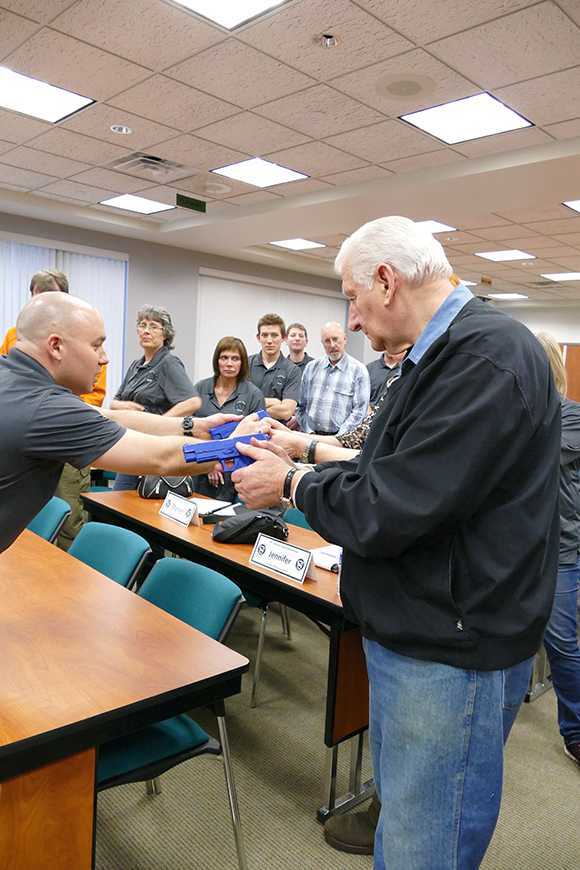 Next, each of us has establish our dominant eye by holding our hands up, making a tiny space between purlicues (the curve between your thumb and index finger), centering a small object in that space and then closing one eye at a time. When the object stays centered, that’s the dominant eye, which may or may not be the same as your dominant hand, our next fact to establish. The class lines up between the tables in two long, single-file rows and waits for their chance to hold the pretend weapons and practice positioning, starting with the blue plastic pistols, a mock version of the standard weapon for Mt. Lebanon police officers. One by one, hands grip the handle and students practice squaring their shoulders, fitting their non-dominant hand into the correct position and arranging thumbs to one side, pointed forward. Once everyone feels comfortable holding the pistols, Hughes, Kunz and Chops rotate in the plastic assault rifles.

As Chops gives instructions, he tries to keep everyone laughing, calm and as a result, in control, “move your thumby-poo over here,” he tells one woman, while adjusting her grip. A giggle breaks out when he uses the term, “little mitts.” 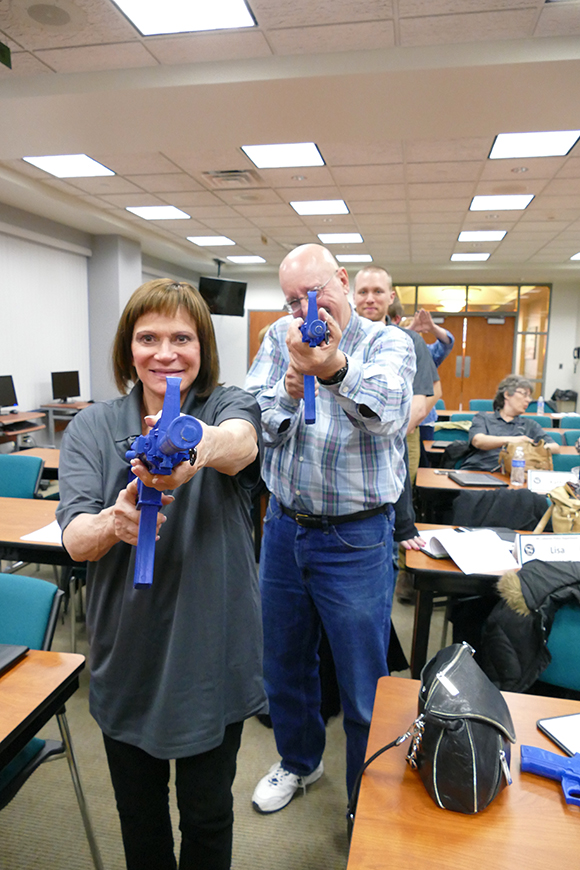 As our instruction draws to a close, anticipation begins to fill the air. We hear Chops say the words the class has been waiting for all evening: “Does everyone know where the range is?”

Ten minutes later, on Lindendale Drive, we’ve all parked our cars and wait for Chops, Hughes and Kunz to arrive. It’s time to put what we’ve learned to practice–this time, with the real deal. The students walk into the range, which appears to be a large, empty, concrete room, but is more than just that; it includes a ventilation system and bullet-trap in the rear wall. We all put on goggles and sound-reducing earmuffs and stay behind the painted line that separates the shooting range itself and the gallery.

With Chops, Hughes and Kunz each in their own lane, students volunteer to shoot, one at a time. Chops mans the assault rifle, while Hughes and Kunz each have small-caliber pistols. Students are supposed to go in a line and practice shooting five rounds with each gun before moving to the right and the next firearm. While a few brave souls jump into the mix immediately, I ask a few of the students about their experience this evening. 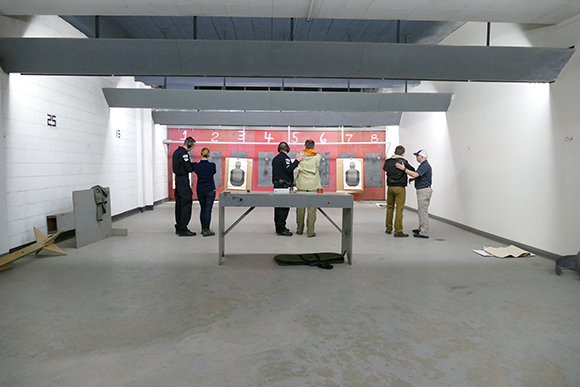 “They’re good teachers and it’s a good opportunity,” says Aaron Pavkov, a Fieldbrook Drive resident, among the loud bangs of rounds. Another woman tells me she had to convince herself to go up and give the real guns a try, thinking, “I have to do this!” Lisa Borrelli, also a Mt. Lebanon resident, shot the assault rifle and surprised herself; “I liked it better than the pistols.” The rifle has less kickback, since the recoil is absorbed directly into the shoulder, instead of traveling through the arms. When asked about the program as a whole, a few students echo the sentiment, “It’s perspective.”

As the remaining class time ebbs, so do the number of students. By the time everyone has shot at least five rounds, a turn with one of the three guns, an hour has passed. I take my own turn behind the pistol trigger, and for the first time in my life, shoot. 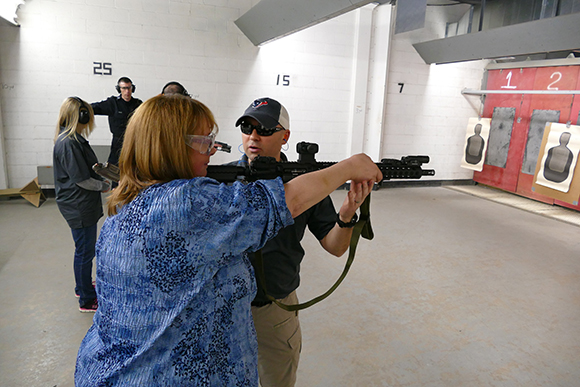 The recoil is surprisingly light; these .22 caliber bullets are small. After the first shot, I want to look and see if I’ve hit the target, but Chops’ words ring through my head: “You’re shooting a gun, so pay attention. Who cares where your round went?” The target, a black and grey body-like shape, is also riddled with earlier rounds and figuring out which bullet hole might be mine is an impossible proposition. So I square my feet and my shoulders, line the gun back up with the grey square–I think–and pull the trigger four more times.

And for many minutes afterwards, adrenaline courses through my body; it passes through my slightly shaky legs, a torso that resembles one I’d just shot at, shoulders that bore the small brunt of recoil, previously straight and extended arms, passing into my thumby-poo and eventually through the very index finger that called the shots. 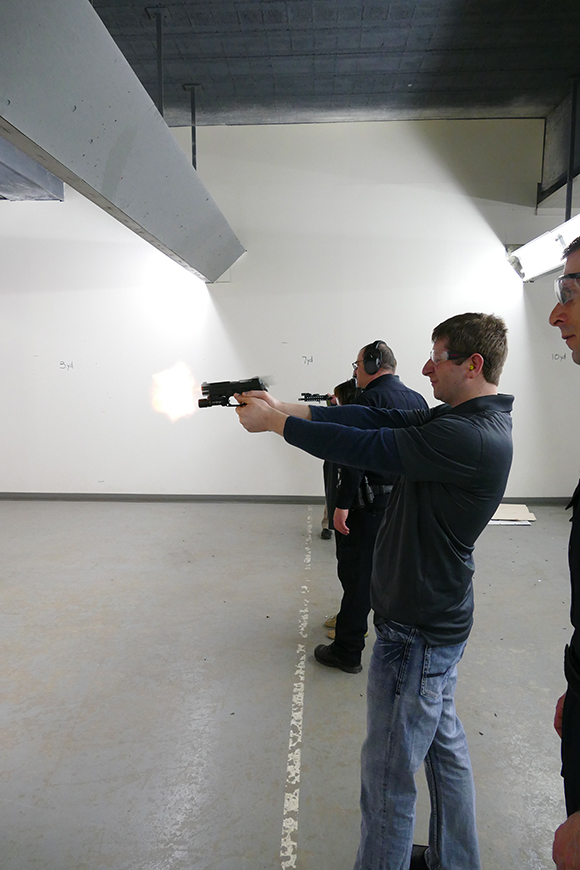