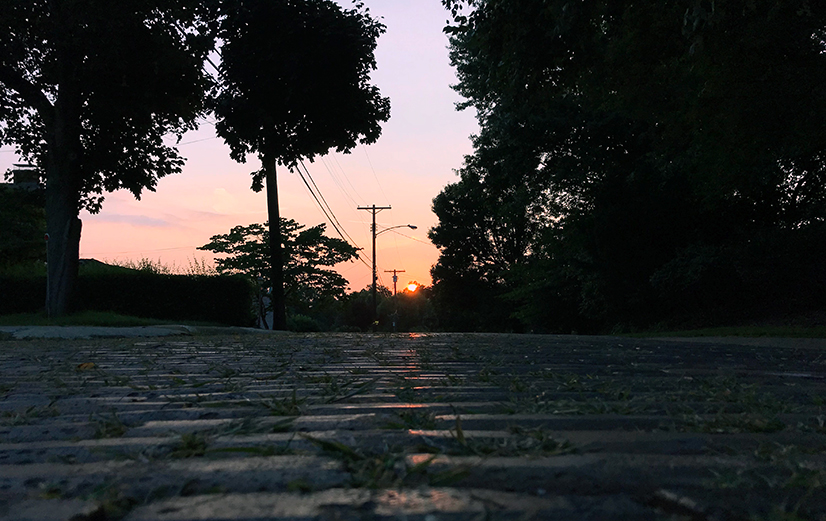 Some things that make a morning good are up to fate—the weather, our health, the state of our relationships. But other factors—waking up in a safe neighborhood, having fresh java at the neighborhood coffee shop, being able to get to work because the roads are clear—are up to people.

In Mt. Lebanon, we are fortunate that when we say “Good Morning,” we might actually mean it—it really is a good morning! Here are a few of the people who get the credit: 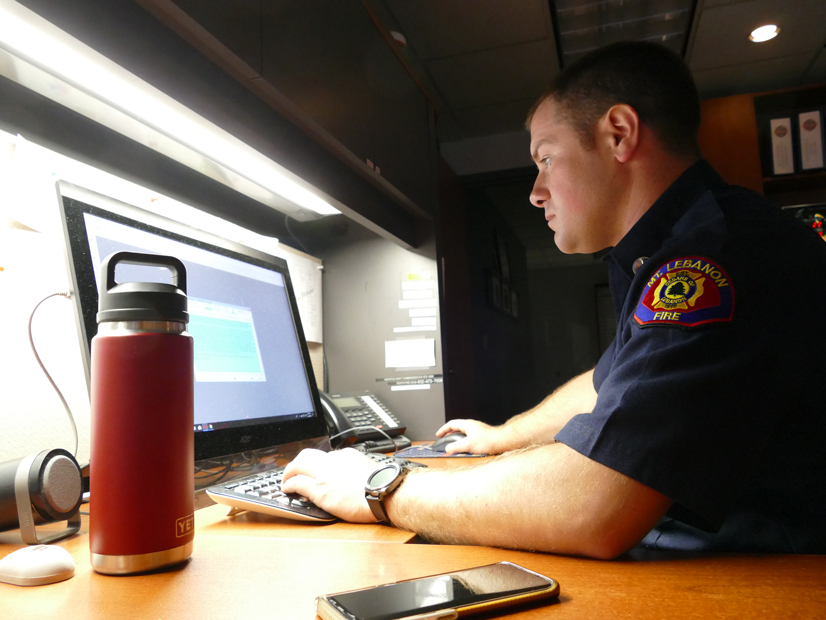 Chris Meyers, Shady Drive East, takes advantage of some quiet time to schedule posts on the Mt. Lebanon Fire Department Facebook page. He has been working since 6 p.m., helping to clean the fire bays, cook dinner, get in his required workout. He has already responded to two emergency calls—one for a downed power line and another for a kitchen fire at a local business. As a lieutenant in the community outreach and marketing department, he uses his downtime to review the department’s promotional materials, such as presentations, brochures and websites, or to manage its various social media accounts. A firefighter since he was 14, and with Mt. Lebanon for a year and a half, Meyers has become accustomed to working early in the morning. “It has pretty much been like this my whole life,” he says. “My father has been a volunteer since the ‘80s (in Cambria County), so we were around the fire department all the time. My brother was hired in Johnstown. My uncle is a firefighter in Baltimore. It’s just a natural feeling for me to be here.” 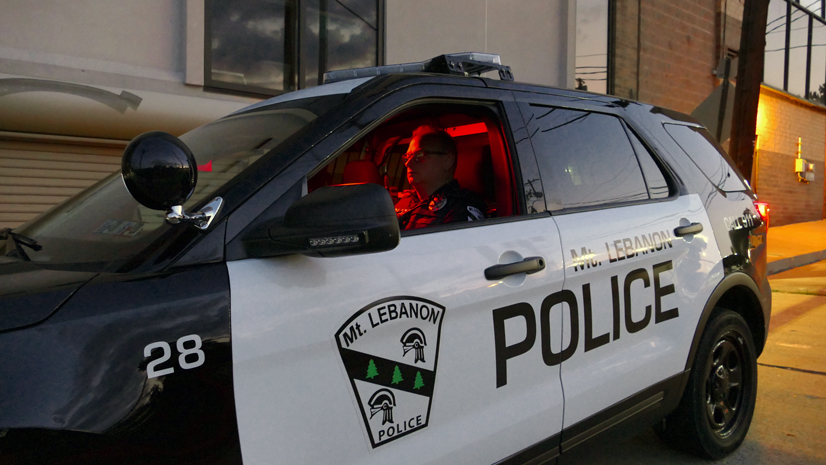 Officer Tom Rutowski is shifting his focus from residential patrol to monitoring the safety of Mt. Lebanon’s earliest risers—runners, drivers and crossing guards. Originally from New York City, Rutowski, who has been with the department for 22 years, recalls the positive impact that neighborhood police officers had on his community, and he looks forward to this part of the night shift because he gets to be around people. He got to work at 11 p.m., and has had a quiet night driving around town, patrolling back streets and keeping an eye on the schools and 24-hour businesses, with the goal of keeping the peace. “Since we work on a 28-day shift, you really get to know what vehicles are supposed to be out. You know who delivers papers, who leaves for work early—so when something is out of the ordinary, it really stands out.” 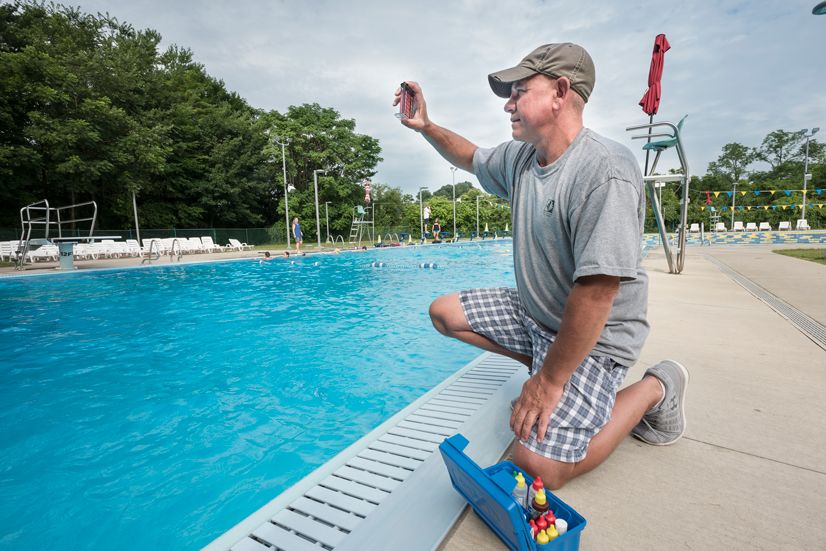 Shawn Hess is just starting his work day. He opens the door of the recreation center and reviews his mental checklist—get the ice ready for figure skating lessons, ensure the meeting rooms are set up correctly, check the chemicals in the pool. He has been working for the recreation department for 29 years, and when he started there, he often worked late evenings and overnight shifts. Now that he is the superintendent, he feels fortunate, “I don’t see myself working normal business hours, anyway,” he says. “Plus, when you start your day early, you end your day early! Which allows me to spend time outdoors, getting yard work done, playing golf, and relaxing with my dog, Geno.” 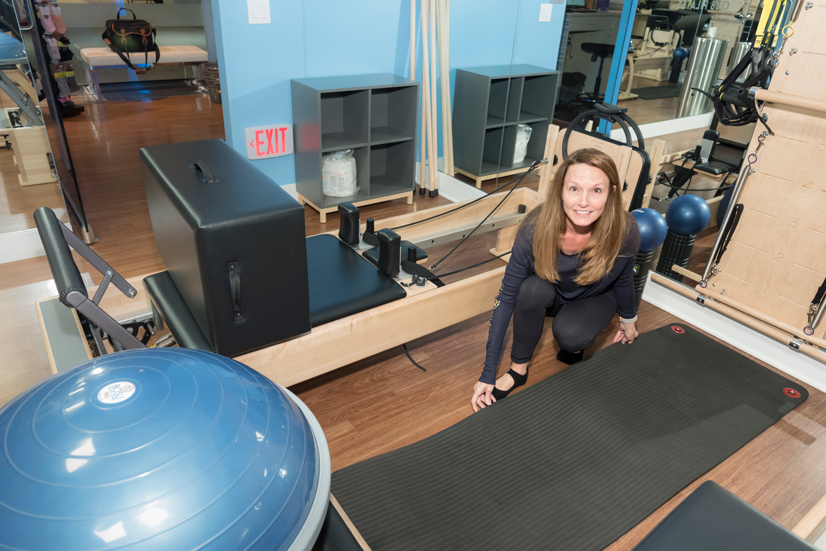 Michele Corso greets the security guards at The Galleria as they open the doors to the mall. After unlocking Club Pilates, Corso does a quick survey of the studio to make sure all of the equipment is in place, before going to the front desk, where she checks in her class members. After greeting the last of her usual morning crew, she heads back into the studio, turns up the music and starts leading the class through their exercises—it’s one of her favorite times of the week. “I like coming in early,” she says. “It’s peaceful. The members are ready and focused. They just start immediately helping to set up the room. It’s the same group of people that come every morning at 6 a.m. It’s a peaceful class, I like it.” 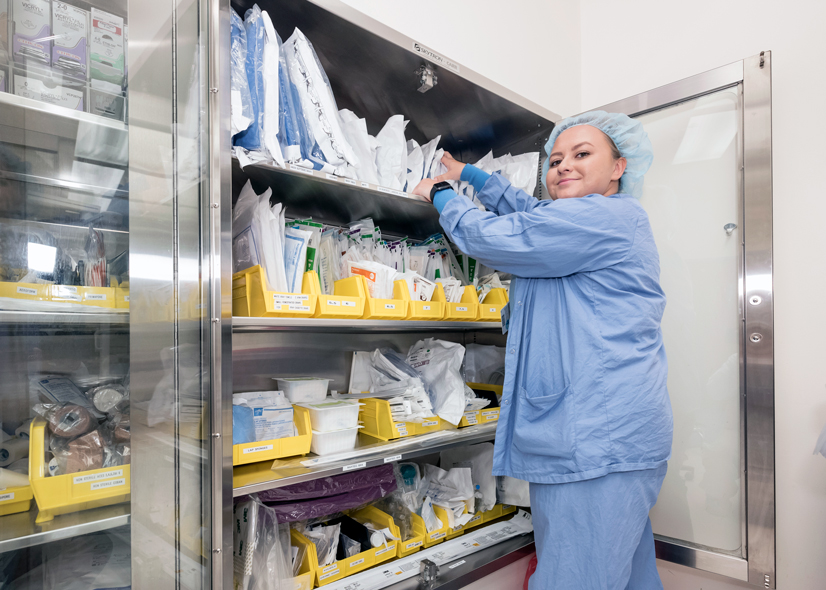 Laura Duvall, Kelso Road, is looking through today’s staff schedules and assignments. As the operating room supervisor, Duvall’s primary responsibility is to make sure that everyone—surgeons, doctors and nurses—and everything is in its proper place throughout the day so that the OR operates smoothly. She graduated from Mt. Lebanon High School in 2009 and received a nursing degree from Pitt in 2013. She has been working at St. Clair Hospital since 2015, where she started out on the night shift. But her new role in the OR gives her much more satisfaction. “I love my job. I never thought I would be one of those people who said that all the time, but I really enjoy it. We are a team. We all know each other on a personal level, and we take care of each other. It’s like a family here.” 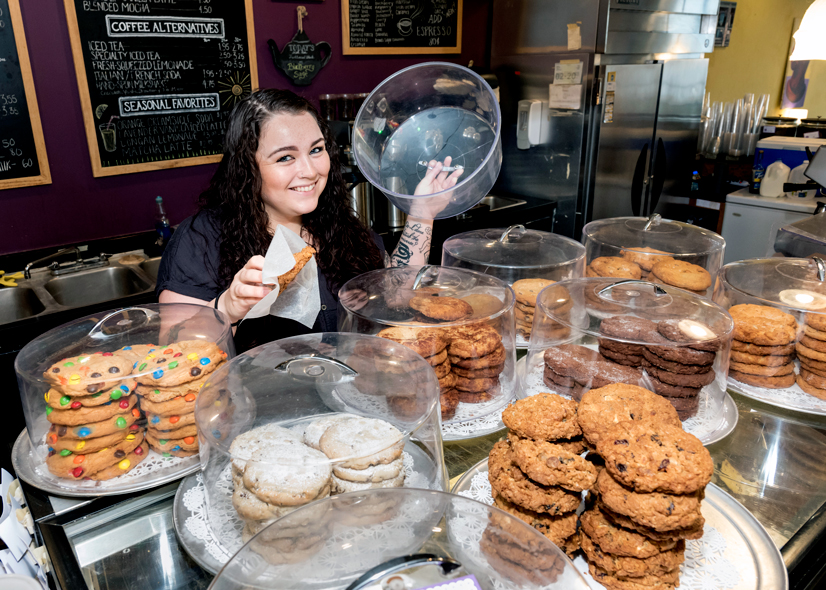 Brenna Fritz, Mt. Lebanon Class of 2012, is brewing eight gallons of coffee to meet the demands of the shop’s morning rush. By the time she opens the doors at 7, she will greet a line of eager regulars, each of whom she knows by name and caffeine preference. Fritz has been working at Uptown Coffee for five years, has been a manager for four, and is currently juggling work, an internship, and the pursuit of her master’s degree in counseling at Carlow University. “I love working mornings! I actually love working Mondays, because everyone is in a bad mood, but they are so happy to get their coffee … It’s also great to have that quiet time before the world wakes. And coffee helps, man. I drink a lot of coffee. I’m turning into a morning person the more I grow up.” 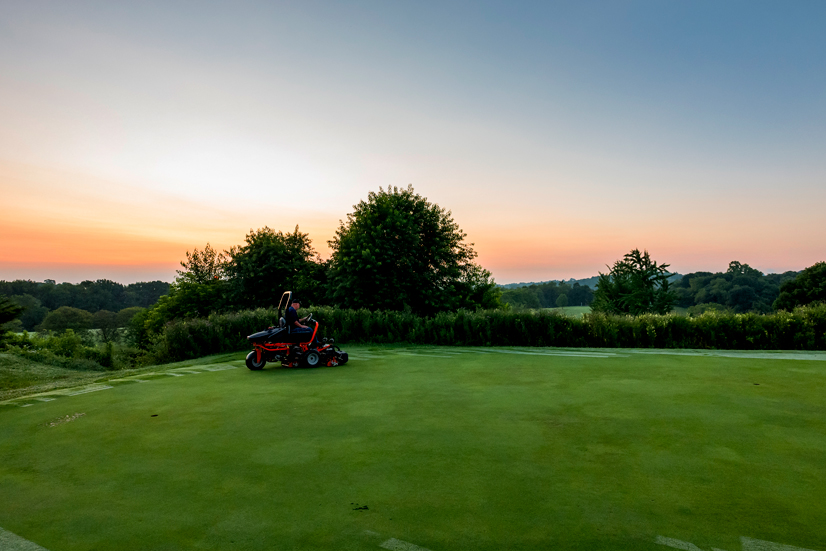 David Ames is mowing the greens on No. 6. He’s glad that he managed to get a good lead on the early-morning players, who are just now teeing up at No. 1. Ames started part-time at Mt. Lebanon Golf Course in 1987 and has been the maintenance superintendent for almost 20 years. When he’s done mowing, he will repair equipment, fertilize some of the greens and then fix leaks in the irrigation system, before going home around 2:30 p.m. “When I was in ninth grade, my dad got me a job working at a local cemetery [mowing grass],” he says. “I hated it. And somehow mowing grass became my career … I really do like being out on the golf course, though. Managing plants is really what we do. There’s a technique to keeping grass alive—that science aspect and the ability to be outdoors is what I really like.” 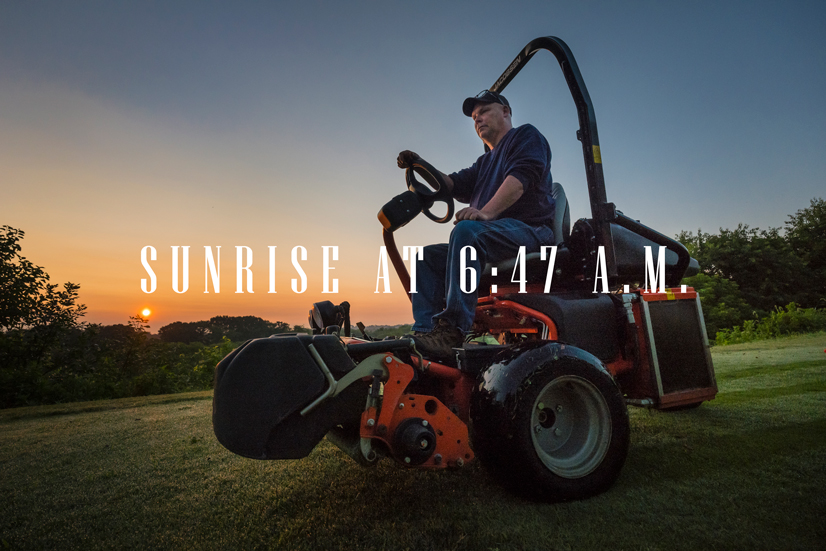 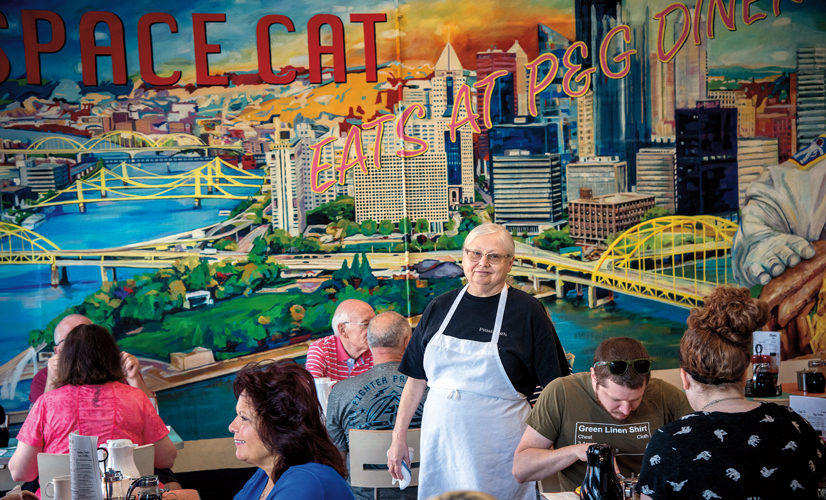 Edie Torcaso, McFarland Road, is washing and cutting the lemons, strawberries and other accompaniments to Pamela’s famous crepe-style hotcakes, before the doors open at 7:30. For Torcaso, working at Pamela’s is a family affair—her two sons work full time at other locations, and her daughter, sisters, niece, nephew and grandchildren all have worked for Pamela’s over the years. Originally from Hungary, Torcaso moved to Pittsburgh when she was 12, and other than a year-and-a-half break, she has been working for co-owner Pam Cohen’s family consistently since 1982 (back when the family owned Papa Joe’s). As supervisor, Torcaso waits tables, helps in the kitchen, plays hostess and does whatever else needs to be done to ensure the restaurant is running smoothly. “I have a good time with my customers,” she says. “There are a lot of nice people in Mt. Lebanon. It’s a little more relaxed than it is at the other locations across the river in the city … Here, we have a lot more kids coming in, because of the school district, and they are all good kids. They’re fun to interact with.” 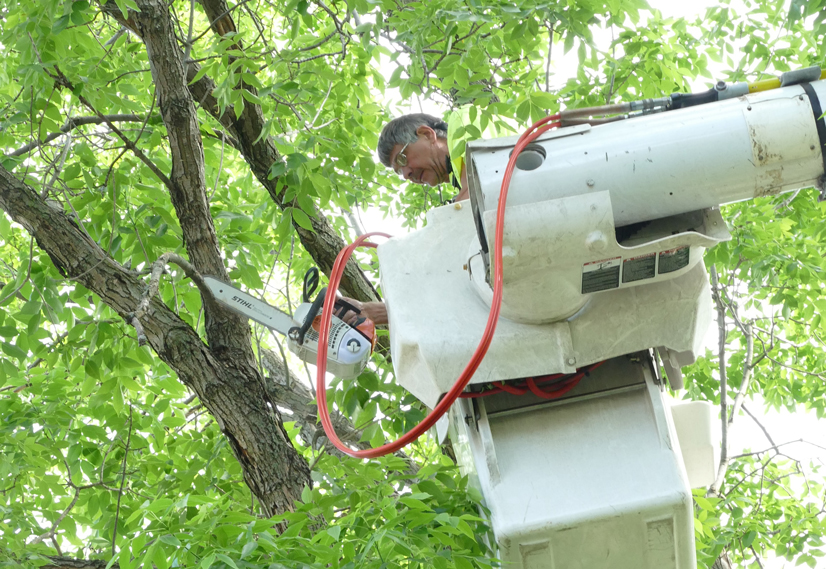 Don Boden is in a cherry picker, trimming a tree on Jayson Avenue. Don retired when he sold his forestry business, but he couldn’t resist getting back into the industry when a full-time forestry position opened up in Mt. Lebanon seven years ago. His work varies, depending on the season. For example, he knows he will be doing a lot of tree removals in the winter, trimming trees in the summer and planting trees in the fall. For Boden, going to a different site every day, taking care of the parks and getting to care for local trees is what he loves to do. “Mt. Lebanon takes a lot of pride in their trees,” he says. “We are a Tree City. And it is nice working for one of the few communities out there with a public works department that does certified tree work.” 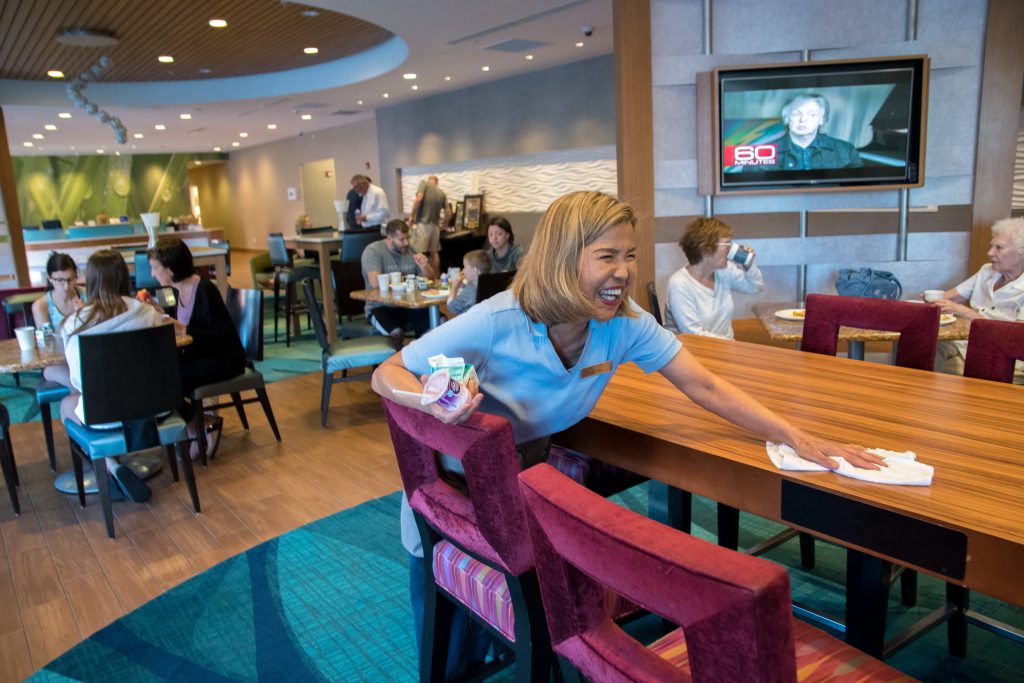 Chong Runatz chats with the guests as she manages the continental breakfast. She got to work at 4 a.m. to help set up the lounge area, clean and assist with preparation, and has been serving, stocking, bussing and hosting since breakfast began at 6:30 a.m. Chong moved to the United States from Korea almost 30 years ago and she is glad to call Pittsburgh home—she feels it is quieter than other cities. For Chong, getting to work at 4 a.m. has become second nature to her, as she has been working for Springhill Suites as a breakfast attendant for nearly 10 years. “Other than [having to] stand for eight hours, this job is nice. The owner is nice, and I like the people. Which is why I came [to this location],” she says. “And it is nice to get home early. I have more time at home!”

As the sun makes its slow ascent into the sky, Meyers is briefing the daylight shift before making his groggy way home. Corso is starting her third class of the day. Duvall consults with an anesthesiologist, while Torcaso places a heaping dish of hotcakes in front of a customer. It’s a good morning in Mt. Lebanon.