It’s almost 9 p.m. on a Tuesday, and a group of 20 adults, all at least 40 years old, some in their 50s, are gearing up to hit the ice. This group of mostly guys and a handful of women are part of a hockey league called the Ultra-Light League, a no-contact hockey league that plays 16 games and is now in its 28th season. “We’re a bunch of old guys skating around in circles,” says Todd Kaczorowski, a Mt. Lebanon graduate and resident who plays on the league. He’s on the winning team tonight, named Yinz Guys. Teams change and are mixed up at the end of each season.

Greg Covato and Paul Henney are the two main founders of the league. They used to play in the Senior League, for players 25 and older, but “had enough of the aggressive younger guys,” says Covato. They decided to start a league that wasn’t just no-checking, but no-contact. “We have two mottos. One is ‘I’ll go out of my way to get out of your way’ and the other is ‘Everyone wants to get up for work the next day,’ ” They wanted a league that was fun, competitive, but minimized the inherent risks of adults speeding across the ice on skates, chasing after the same puck. Towards the end of the game, two guys collide and one is knocked flat onto his back; while he eventually walks off and seems okay, it’s a reminder that there’s still only so much you can do to make a sport like hockey gentle. 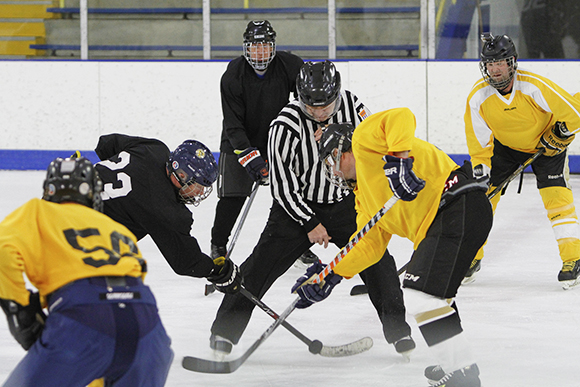 The oldest player on the team is Stewart Diess at 68. He’s slated for the second game, so he arrives around 10 p.m., ready to play like the rest of the younger guys. His skating doesn’t belie his age in the slightest.

“It’s the most constructive thing I could be doing at 10 p.m.,” says William Elman, a nearby resident who’s been playing for the last five years. He used to play as a kid and when his son, a Mellon Middle School student, took up hockey, he got back into the sport himself. “I sleep better after playing–like a baby,” Elman says. He’s just turned 45 years old this month, but with so much speed and energy on the ice, it would have been hard to tell.

The players come from diverse backgrounds. One player owns a restaurant, some of them are attorneys and Henney owns Laughlin Memorial Chapel. Covato describes his day job, calling himself an “advisor to institutional money managers.” The average age of players in the league is 49. 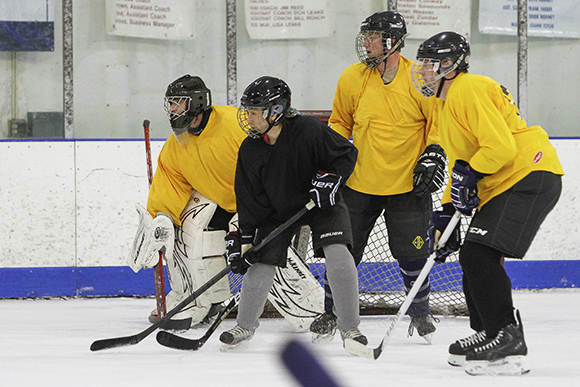 On the ice there are also two of the league’s eight women playing tonight, Rosie Tena and Maria Totin. “We have really talented players on all levels,” says Totin, although not all of them have previous hockey or skating experience. Totin had never ice-skated before joining the league in 1999, its second season. She’s now a seasoned pro, when it comes to the Ultra-Light League. “It’s hard to find leagues like this,” she says. Part of the allure of the league for her and others is that everybody knows everybody. “It doesn’t get heated,” says Kaczorowski, “We’re all good friends.”

As the timer winds down in the third period, the Ugly Pucklings admit defeat, losing to Yinz Guys, 3-1. The game ends and the friendly post-game high fives accompanied by smiles, in this league, are for real.

Photographs by Julie O’Hara, except where noted.
Related Stories