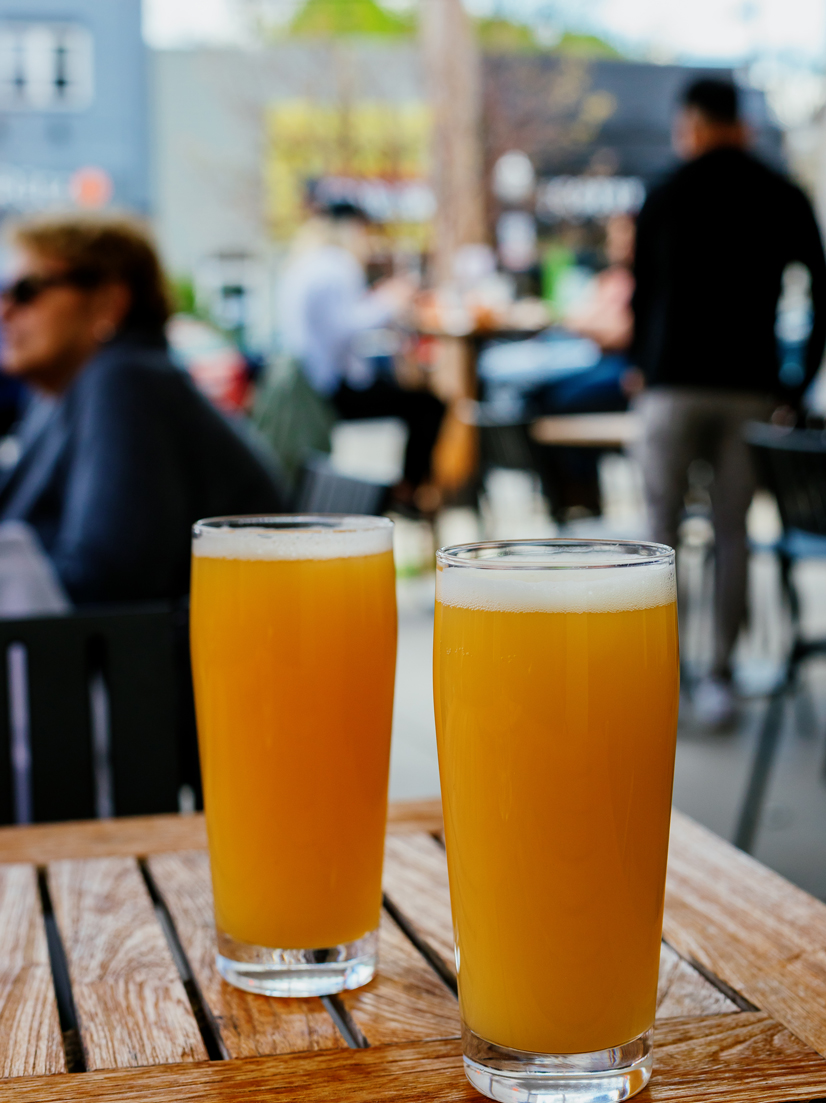 “Let’s get together for a beer.”

“See you there for a beer.”

“Why don’t we meet there after work and I’ll buy us a beer?”

That’s such a simple thing, but it can be such a wonderful thing if you’ve missed having beer out with a person or people you like.

So many people could not—or chose not to—do that for much of the year-plus-long  pandemic that caused many restaurants, bars and breweries to restrict, change or close their operations. But as things began to open back up this spring and the ranks of the vaccinated rose, more people once again could order a cold draft beer or two over a bar and sit there with another person or people and drink. AHHHH!

Mt. Lebanon has many cozy places to enjoy a good beer—none more kozy,  nor more Lebo than The Korner Pub, on the ground floor of the Lebanon Hall Apartments at Bower Hill and Washington roads. Next door to a barber shop, it looks to be a classic old-man bar, and it is, except it’s run for people 21 and older by a group of former Mt. Lebanon High School friends now hitting their 40s, and most of whom still live here.

Owners since 2014 are Robb Full and his partner, Melissa Whittier, who live on LeMoyne Avenue; Brandon Smith, who lives on Orchard Drive, and Greg Ripper, who has moved to Scott. They took what was a smoky dive bar and, besides stopping smoking and cleaning the place up, didn’t change much. Customers are warmly welcomed by the neon signs, a creaky screen door and humming coolers of beer to take out or to drink at the short bar, which offers 10 taps. The only thing they serve is beer.

“We’re actually a pretty popular first date location, because you don’t have to commit to a full dinner,” said Full. “ You can have a beer and be done.”

Actually, you couldn’t from spring of 2020 through spring of 2021, when the Korner Pub mostly was closed, or open only briefly for takeout. But by April, Full was back to ordering beer so they could gradually reopen, if to a different world.  “I’m positive things will change,” he said.  “I just don’t know what it will look like. … We’re just going to see where it’s at and meet people there.”

He did know the chalkboard draft list again will be heavy with the most popular variety—pale ales, whether they be India or imperial, always hoppy and increasingly hazy. He also knows that their offerings will include sour beers, at which most customers would have wrinkled their noses in 2014. Now many beer lovers are sweet on them.

More than anything, customers are looking for local brews. That’s the case at beer bars around town and around the region, including 25-year Oakland landmark Fuel and Fuddle, where Smith started working when he was 21. (Now at 40, he owns it, too.)

In Mt. Lebanon, beer doesn’t get any more local than that made by two breweries owned by locals. Scott Smith, who lives with his wife, Julie, and family on Longuevue Drive, started East End Brewing, one of Pittsburgh’s first craft breweries, in 2004, and so marked its 15th anniversary shortly before the pandemic hit. It was a one-man show in a windowless warehouse in Pittsburgh’s Homewood neighborhood when he started, but has grown into a literally hopping hub of craft beer production, sales and consumption in nearby Larimer. 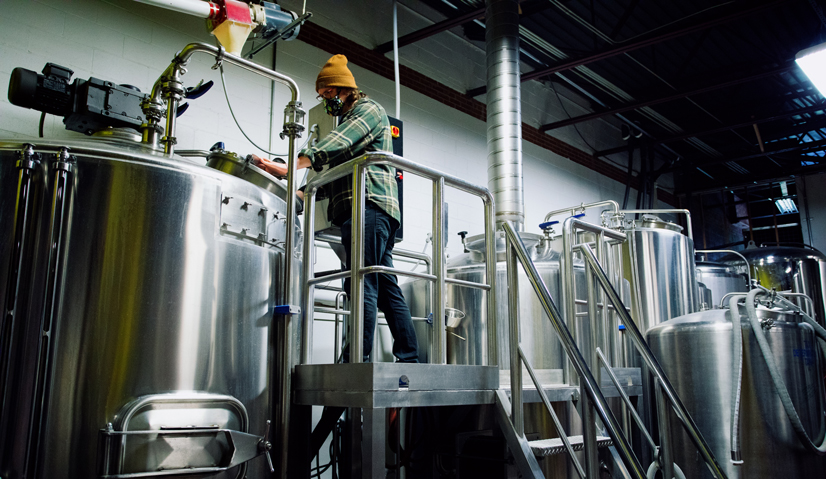 His pandemic pivot was to deliver beer to consumers at curbside or to their homes in surrounding zip codes, including 15228. That helped him continue to employ all 14 full- and part-time employees who wanted to remain.

When the Friends of the Mt. Lebanon Library’s annual August Beer Garden Bash had to be canceled, Smith supported the group’s Virtual Beer Tasting with cases of actual beers and helped the library that way. East End Brewing managed to hold its own during the first year of the pandemic, when revenue actually was slightly up, Smith explained, and he expected to be operating more normally this summer, with guests back in the Larimer taproom as well as out on the patio to drink beer, fill growlers of beer and eat fare from a new restaurant cheekily dubbed “East End Chewing.”

“Never at a loss to make an awful joke,” he quipped. But he is seriously considering expanding the ongoing series of “You Are Here” beers named for 90 city neighborhoods to surrounding municipalities, so yes, there could literally be a Mt. Lebanon beer.

Another big Pittsburgh beer brand, Hitchhiker Brewing Co., is owned by Mt. Lebanon residents—Gary and Serena Olden of Colonial Drive. It has taprooms in Mt. Lebanon, on Castle Shannon Boulevard, and at its big brewery in Sharpsburg, in part of what once was the massive Fort Pitt Brewing Co.

But Hitchhiker was tiny when Gary started it in 2014 with a brew house squeezed into the head-bumping basement in the Mt. Lebanon building, which he just got lucky to find available after shopping for buildings in surrounding towns that have more suitable structures.

“I didn’t even know it would be possible” to open in Mt. Lebanon, he recently recalled, but said it was “one of the best things that happened to us, sorta by circumstance.” They expanded to Sharpsburg in fall 2017. Both taprooms were mostly closed during the pandemic except for customers to pick up beer they’d preordered—a convenience that Hitchhiker will continue to offer for those who don’t want to drink a beer out.

“You have to give people options at this point,” Olden said as restrictions eased the first weekend of April and he prepared to reopen both taprooms. “Not everybody is ready to come back.” He mused that many people’s habits probably have changed permanently.

The two taprooms, separated by just 13 ½ miles, a little more than a half marathon (Olden has run from one to the other) are different in more ways than just their size. Much cozier Mt. Lebanon tends to fill with people who live in the neighborhood, while bigger Sharpsburg draws a more transient, often in-transit crowd. Olden, drawing on the fact that he and his wife have two sons, said, “I look at them like having children that are very different.”

He loves them both, but “I look at Lebo as a super special place in my heart because that’s where we started.”

Scott Smith went into this spring expecting to work with the state Liquor Control Board to finally open a second taproom adjacent to the Onion Maiden restaurant in the city’s Allentown neighborhood.

A brewery that few people knew existed until this spring is Links Brewing Co. on the North Side. It was quietly launched last year from the basement of the PFE Fire and Safety Corp. by its third-generation owner Jeff Becker, whose parents lived in Mt. Lebanon when he was born in 1977 and who now lives with his wife and two daughters on Mt. Lebanon Boulevard.

For the past several years, Becker has been passionate about craft beer, but his side-hustle brewery is “definitely a different take,” because it’s aimed at a specific demographic: golfers such as himself.

Links debuted their draft at Oakmont Country Club in May of 2020 and got it on tap at several other private clubs. But they don’t want to be seen as pretentious. In April, they began canning their brews for takeout at the brewery while they expand the number of golf courses that serve it. This year, plans include a Links Brewery-wrapped Sprinter van with a half dozen taps that can roll up and pour at golf tournaments and other events.

“What drives me, and drives us,” he said, “is to be served at the top 50 golf courses in
the country.”

Other beer people who’ve gotten their start in Mt. Lebanon include Matt McMahon, who, with his wife, Keana, owns 11th Hour Brewing.

He’s vice chairman of the Pittsburgh Brewers Guild of what’s now 39 Allegheny County breweries … and counting … that are working together on ways to keep going.

The McMahons live in McCandless. But he grew up on Mt. Lebanon’s Old Farm Road. And get this story: His Sunset Hills neighbor and friend at Howe Elementary School was Dustin Jones, who started Mindful Brewing Co. in Castle Shannon in 2017, the same year McMahon opened 11th Hour.

“We actually had discussions at a couple of points about partnering up,” said McMahon, but the two Lebo guys decided to follow their own muses, with Jones going for a restaurant and bottle shop and McMahon going for more of a rustic brewery feel.

Back in Mt. Lebanon proper, good beers can be enjoyed at cozy spots such as The Korner Pub and the iconic Saloon of Mt. Lebanon, Atria’s, Bado’s Pizza Grill and Ale House, Caliente Pizza & Drafthouse, BRGR, Mediterra Cafe and Primanti Bros.

McMahon muses about how he used to frequent several of those places when he was, well, younger than the 41 he is now so he could meet friends to drink a beer. “It’s funny to be supplying them.”

Bob Batz Jr. lives in Sunset Hills and can be reached at batzjr@aol.com.