Robyn Vittek is Mt. Lebanon’s new library director, succeeding Cynthia Richey, who held the post for 18 years. Vittek, an Ohio native, was previously director of the St. Clairsville, Ohio, Public Library. Prior to that, she spent seven years with the Akron-Summit County Public Library in Akron, Ohio. She holds a bachelor’s degree in English from The Ohio State University, a master’s degree in education from Franciscan University, and a masters in library science from Kent State University.

Mt. Lebanon Magazine introduces our new content creator, Katie Wagner. A graduate of Mercyhurst University in Erie, Katie received a BA in Strategic Communication with a minor in voice performance. In college, she was heavily involved in the Mercyhurst University Theatre Program as a performer and director while also acting as the public relations representative for the program during her senior year.

Wagner moved to Pittsburgh after graduation and began working at PICT Classic Theatre, originally as a part-time marketing assistant and eventually as the marketing and communications coordinator. She bought her first home in Mt. Lebanon in April, got married in October and is delighted to begin working for mtl, where she gets to write about her lovely new hometown.

In her spare time, you can find her practicing her singing, brewing beer, reading “Game of Thrones” or watching TV with her husband, Killian, and her cat, Tonks. Katie can be reached at kwagner@mtlebanon.org.

During high school, Lantzman realized all of the possibilities in medicine. “A couple of my friends’ parents were physicians and that opened my eyes to the world,” Lantzman says. “I’m the first doctor in my family. I didn’t really have anyone in my family to learn about the profession or to get any experience.”

He and his wife chose to move to Alaska for a big adventure, where he says the work was “incredible. … Ninety-nine percent of my patients were Alaska natives. It was a really interesting cultural experience,” Lantzman says. During his time there, Lantzman helped underserved Alaskans who would come to him with full-grown tumors or cancer because they hadn’t received health care for a long time.

Lantzman’s skills in high-risk medicine will come in handy as he works for the Allegheny Health Network as part of Jefferson Women’s Health, especially since the majority of cases he deals with are much more routine.

“I have a general comfort level with a lot of medical conditions that people are coming in with,” Lantzman says. “If you’ve done the riskier version than what you’re going to do, it makes you a lot more confident about the basic stuff that you are doing.” 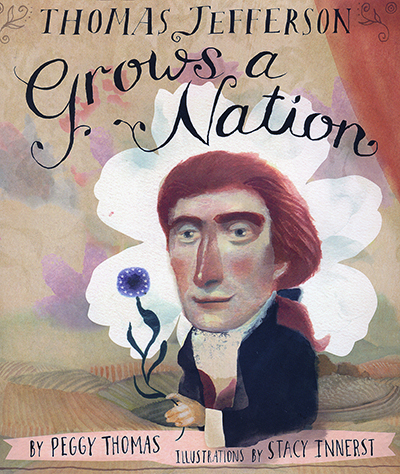 Stacy Innerst, Lakemont Drive, has drawn the Beatles, Levi Strauss, a family of worms, a range of musical instruments and two U.S. presidents in the children’s books he has illustrated. His newest effort, Thomas Jefferson Grows a Nation, is written by Peggy Thomas. The 48-page book focuses on a few lesser-known stories about the third president, including his lengthy attempt to convince French writer Georges-Louis Leclerc of his grievous errors in describing North American wildlife as “inferior,” even going as far as having a dead moose shipped across the Atlantic. Jefferson won that argument.

Thomas Jefferson Grows a Nation has gotten good press: The School Library Journal says Innerst’s work “has a slyly humorous quality, with Innerst adding a hint of Jefferson’s distinctive red hair color in the tones and shades on most pages.”

Thomas Jefferson Grows a Nation is available online at Amazon and
at Barnes & Noble in South Hills Village.