In the middle of a rain storm, Pete Dawida asked his travel companion to pull over to the side of the road so he could get out of the car to poke around in some nearby bushes.

“My friend thought I was crazy.”

He wasn’t crazy. He was geocaching.

Geocaching is hiking meets scavenger hunting. Participants look up the coordinates for cache coordinates on the geocaching website. Cache items are usually small, usually inexpensive trinkets or tools, that typically are stored in waterproof canisters such as old snack containers or tin boxes that hold small items, although some cache owners will use more discreet holders to create more of a challenge. The geocacher’s goal is to use coordinates to track down the cache where they can trade in their small object for another.  The site also includes resources like information videos, and cache locations.

“It’s kind of like a treasure hunt…an excuse to go explore the area,” Dawida, a 31-year-old civil engineer and Brookline resident, says. “It’s taking a hike with a purpose. You have a destination.”

There are more than 2 million geocache locations around the world, six active cache locations in Mt. Lebanon alone. Dawida says he’s hiked many of the trails in the Mt. Lebanon area, in pursuit of his cache prizes. The first cache he ever took was a plastic army man with an attached parachute.

Since then, he’s thought about carrying little army men with him wherever he goes, so he always has an item to trade if he happens upon a cache site. Dawida’s job often requires him to travel, so when he’s in a new place, he looks for a new challenge.

“I make it a project to see what’s around,” he says. “Instead of spending a couple hours at the bar, I’ll go take a walk and find some new trails in a local park.” 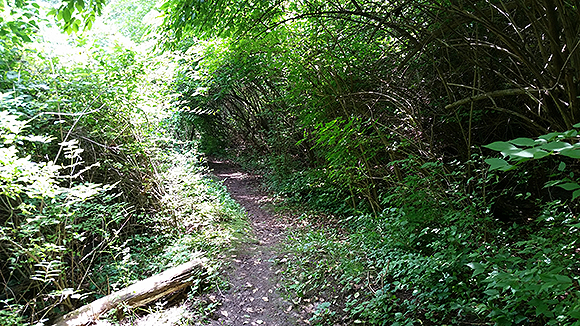 Unlike Dawida, the seasoned geocacher, I was a little rusty. I hadn’t been geocaching in more than 10 years, since my Dad took my brothers and me to a cache location not far from our home outside of Williamsport.

The first step was join the geocaching community, via username and password. The hardest part about my experience was figuring out how to upload the coordinates to my phone…but that may have been because I was the proud owner of a flip phone until I caved and bought a smart phone about a year ago.

Once I uploaded my coordinates through the geocaching app, a compass appeared on the phone screen that pointed in the direction of the cache location. Seemed pretty simple. I decided to give the Robb Hollow Trail a go, located on Lindendale Drive off Cedar Boulevard. It was a mostly easy trek with a couple of steep parts where it was tough to keep my footing, but nothing too difficult. It was about a mile hike to the cache sight, with thick green trees that bend over the path, forming a sort of organic, green tunnel at some parts of the trail.

Based on my geocaching trip, here are a few thing you’ll need, if you decide to try it for yourself.

The trail was well maintained, and I didn’t feel as if I could get lost while searching for the cache, since the sounds of the traffic reminded me that I wasn’t far from civilization. This was no “Man vs. Wild.”

As I neared the cache, there was an overgrown fire circle and picnic area where hikers can sit down for a rest or a picnic. I kept walking until the compass started spinning. This was an indicator that I had passed the coordinates and would have to double back a few yards. The cache was close.

Patricia Harvey and her husband, Jordon McMichael, Birch Avenue, started geocaching two years ago because it was cheaper than dinner and a movie for the two graduates, fresh out of Boston College. “We were pretty broke, and Boston is pretty expensive, so we needed to find some cheap date options,” she says. “A quick Google search brought me to geocaching.”

The couple found that there was a cache hidden only 200 feet away from their apartment. Harvey says they’ve kept up the activity over the years for two reasons:“It’s free and it’s free!”

Since then, the two have left Boston but kept on geocaching. Although they have been busy lately, renovating their home, starting new jobs and planning their wedding, Harvey is looking forward to a free day when she and Jordon can get back on a cache trail. “It’s a great way to see sites a travel book may not bring you to,” Harvey says.

She has a tough time putting geocaching into words. “It’s real-life treasure hunting! Or maybe more like high tech hide-and-seek because the word ‘treasure’ is a bit of a stretch. Maybe a scavenger hunt is more appropriate.”

Patty Davies, has hit almost every cache in Mt. Lebanon…except for one.

Davies, Haverhill Road, has yet to conquer a three-part cache trail that runs through Uptown, starting at the library and ending near St. Bernard Parish. “I know who hid each of them, but I can’t bring myself to ask for clues,” she says.

Davies, an EMT at Medical Rescue Team South Authority, says she and her family began geocaching after after her friend, a firefighter, described the activity to her. “I saw it as a high-adventure search for treasure until I really looked into it.  Now I realize that it is basically a low-adventure search for ‘treasure,’”  Davies says. “It’s essentially a global treasure-hunting game that requires almost no specialized equipment and can be done nearly anywhere.”

Back on Robb Hollow Trail, I left the path and started searching the wooded area for my prize. At this point I didn’t find the compass useful, since it was really just a matter of spotting the cache…if there was a cache. Some cache locations are discontinued, and for a few minutes as I searched, I worried the Robb Hollow Trail Cache was one of them.

Then I spotted it. A yellow speck peeking out at me from between a few boulders.

The cache container looked like a large snack container. The yellow I saw was a Pittsburgh Steelers Terrible Towel. I also spotted an Animal Friends magnet and a child’s wind up toy among the traded treasures…objects that belonged to people I would never meet, but who shared this passion for pursuit.

I was so happy to find the cache that on the walk back I realized I forgot to take something and leave the head-lamp. But I didn’t turn around. I guess I’ll have to go back to Robb Hollow Trail. For me, the tiny objects were neat to look at, but it was the feeling of accomplishment at finding my first cache in over a decade that felt best. I wanted to find more, and that’s a feeling Davies describes as “the bug.”

Davies and her kids, AJ, now a 19-year-old sophomore at Duquesne University, and 9-year-old Ren, share a feeling similar to my own when they spot a cache.

“I love doing it with my kids because they can all participate and they enjoy the feeling of accomplishment that comes from finding the cache,” she says. “I can’t think of a favorite cache, although the best ones come with memories of fun times with my kids, so it’s not usually the geocache that makes it memorable for me. The best geocaches are ones where my kids all work together and no one fights!”