The halls of Mt. Lebanon  High School can be a dark and dangerous jungle, especially during the annual Halloween door-decorating contest. Students from each homeroom spent their before- and after-school hours designing and executing what in some cases were nothing less than works of art. The theme, “eerie Amazon forest,” inspired plenty of snakes, multiple references to Nicki Minaj (she sings a pop song named “Anaconda,”) neon spiders galore and numerous creative renditions of trees. The students don’t work for free, though; the homerooms with the best doors, as judged by a team of 11 volunteers, mostly moms and dads, receive an array of prizes. The most coveted prize is, of course, donuts for everyone.

The first door, self-titled “face the tree of horrors” features a tree with a handful of green and somewhat terrifying masks hanging from the paper branches. As we slowly meander through the sixth floor hallway, the judges take pictures with their cell phones for later reference. There will be 61 doors in all, so by the end the first few are especially difficult to remember in detail. Some doors are unforgettable, though. A giant snake covers one, and in its mouth is Nicki Minaj’s head. She’s being eaten alive. Another door down the hall takes a simpler approach to the contest: a piece of orange paper is taped to the door and it plainly reads “The Jungle (of seniors).” In a miniscule script they’ve also added, “who don’t care.” It’s unlikely they’ll win the contest, but it certainly gave the judges a laugh.

Steadily we progress through each floor. The doors continue to surprise, ooh and ahh the judges. Some are actually scary. Some are disturbing. Many are wildly creative and impressive. I don’t envy the judges; narrowing down my personal favorites is a feat already, and we’re only halfway through. After winding through the old building, we step outside into the chilly air for a moment, on our way to the new addition. Touring the new facilities, part of a huge renovation project, comes with the job. Many homerooms and their decked-out doors are located in the new building, but a few unfortunate homerooms are also inside the construction itself. Their hallway ceiling is unfinished and the silver tubing sits above our heads in plain view. But awesomely scary homeroom doors offset the unattractive surroundings. This time we’re standing in front of one featuring some small monkeys holding sporks. The look on their little paper faces is eerie, indeed, though I can’t exactly pinpoint why. The judges furiously scribble on their clipboards, attempting to place this and two other nearby door creations on a neat 1 to 10 scale of design and originality. 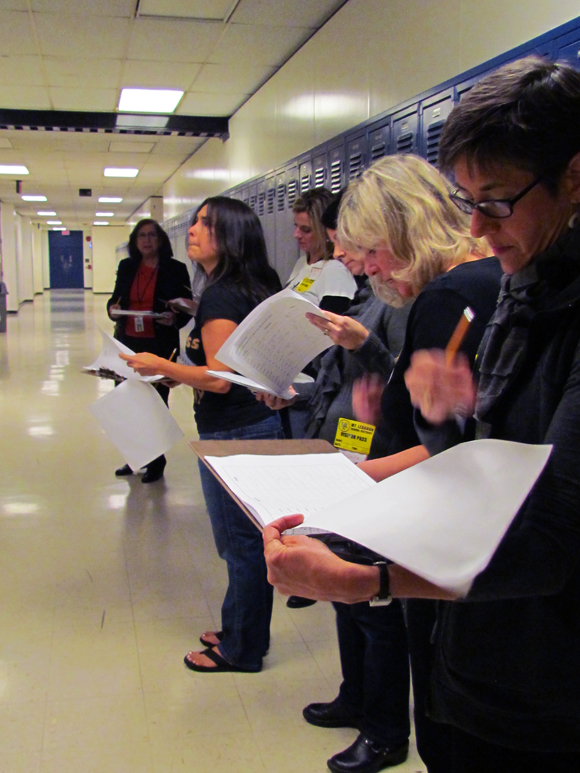 By the end of our tour, we’ve also played student and watched several science teachers blast fire out of a pumpkin. Kinetics, Mrs. Meer explains, is to answer for the phenomenon; more surface area on the flammable powder leads to more possible interactions, which speeds up the reaction. Hence, fire. It wouldn’t be a proper visit to the high school if we didn’t learn something in the process, I think.

After our walk is done and clipboards handed in, the Activities Office begins the long work of tallying the scores. Results will be announced either that day or next week, depending on how busy the staff is. But it doesn’t matter who wins, really, because everyone has already won. The judges, entertained and impressed by the thoughtfulness of many of the doors, have already become winners. The students who put forth the effort to participate, scheming, designing and creating, likely laughing in the process, too, are all winners. The general student body, which gets to enjoy the decorations as long as they remain in place, wins too. I win; taking pictures and looking around the high school, years after I graduated myself, has been tons of fun. The only loser, it appears, is Nicki Minaj, whom a paper anaconda greedily swallowed in the scary, eerie, and apparently perilous Amazon forest of Mt. Lebanon High School’s halls.