Why can’t [the real estate agents] take me to a house like this?” said Anne Mooney about her dream home on Parkway Drive. The year was 1985, and Anne and Paul Mooney were searching for a home where they could raise their growing family. Little did Anne know that house shortly would go on the market, and they would be the lucky new owners of one of Mt. Lebanon’s unique historic homes.

Built in 1926, the house had all the splendor of the Italian Renaissance architectural style—symmetrical brick facade, architectural features in sets of three, rounded archways and tall windows. And a grand exterior entrance.

But that was before a prior owner “modernized” in the ’70s, removing the stately outdoor staircase and replacing its original brick and sandstone with railroad ties.

“Two years ago, we were talking about selling,” Anne says. “We kept trying to deal with the railroad ties, and it was too much.” The ties made the entrance so treacherous that guests stopped coming to the front door. Even the letter carrier wouldn’t brave the walk.

The Mooneys couldn’t bring themselves to sell the family home that remains a gathering place for their adult children and grandchildren. So they took a different approach and began an extensive construction project to restore the home to its original design.

“We are traditional people, and we just feel restoration is important,” says Anne. Paul, whose father was an architect, grew up near William Penn’s Quaker meeting house in Fallsington, Pennsylvania, which has been historically preserved. “We are preservationists,” he says. “We lived in England for two years, and so many things over there are old and have been preserved. It reinforced the idea that this is worth doing.”

Luckily, the elevations and some of the blueprints for the house were hanging in the living room when they moved in, revealing the original design, architect and owner of the home.

Architect Ralph Reutti, who had several prestigious commissions from the Mellon family before the Great Depression forced him into a government post, was commissioned by Dr. Adolph Krebs to design the Parkway Drive home. Krebs was a well-known Pittsburgh eye doctor who worked at Pitt Medical School, Allegheny General Hospital and practiced in the Keenan Building downtown. 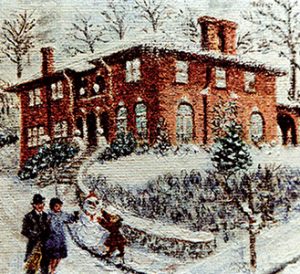 A small painting of Krebs and his wife, Margaret, building a snowman with their young daughter provided further clues to the original exterior of the house, as it features the grand curving stairway that became the main focus of the Mooneys’ restoration project.

“Our house deserves to be right. Not higgledy-piggledy,” says Paul. “We wanted to incorporate the same tones and types of stone that would have been used [in the ’20s].” He engaged local contractor Jim Sobers to restore the stairs, areas of the front stoop, the driveway and the wall that runs alongside it.

“I love doing restoration projects, and the Mooneys were willing to do what it takes to do it correctly and not cut corners,” Sobers says. Unable to find the correct type and color of stone locally, he and his team traveled to quarries from Cleveland to Binghamton, New York, to find historically accurate materials. 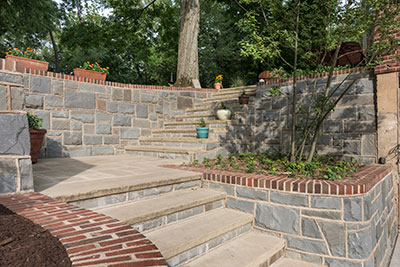 They brought in Pennsylvania field stone for the walls and Cleveland sandstone for the treads on the stairs. Sobers’ team used a very specific, time-consuming caulking method to emulate the historic style, and sawed each stone individually to make it look the same age as the rest of the home.

The biggest challenge was the positioning of the front steps, as Sobers was unable to determine the location based on the original elevations of the home. Fortunately, while digging, the crew found the original foundation and walls, enabling them to place the steps in the exact location.

Another surprise was the number of I.C. Light cans found when the railroad ties were removed, apparently tossed and forgotten by the 1970s construction team. “You would never get away with drinking on the job like that today,” Paul says with a laugh. 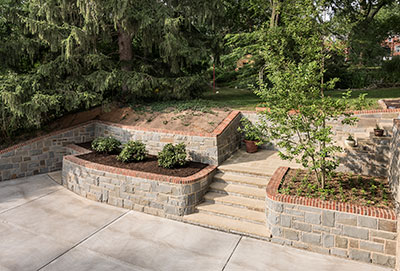 The project began in September 2015 and lasted through this past spring, as factors such as weather and delivery time for the stones led to delays. Despite that, the Mooneys stayed positive and had fun with the situation—they treated the Sobers’ team to lunch on Fridays, and Anne even asked if she could decorate their forklift for Christmas.

The feedback the Mooneys have received has been overwhelmingly positive. “We have so many people we don’t even know saying ‘This is wonderful’,” says Anne. “Our favorite comment was from one of our neighbors who said, ‘I think the house breathed a big sigh of relief when you did this.’” 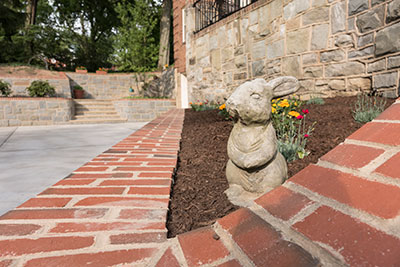 Thinking about taking on a historic preservation project in your home? The Historical Society of Mount Lebanon, the Mt. Lebanon Public Library and the Mt. Lebanon Historic Preservation Board offer resources to those who want to uncover the history of their homes.