Mt. Lebanon History Center is tiny—so tiny that reunion and school groups must visit in shifts.

The center, located in the basement of the stucco house at 794 Washington Road and known as the McMillan House because it was once the home and office of Mt. Lebanon physician Donald McMillan, encompasses three small rooms—an office, an exhibit area and a research room—450 square feet total. Even with tight quarters, the Historical Society of Mount Lebanon has mounted eight exhibits ranging from the history of Washington Elementary School to Mt. Lebanon during World War II, conducted community history tours, hosted annual visits by Mt. Lebanon second graders and accepted donated items relating to Mt. Lebanon’s history, since opening its doors in 2009.

So imagine what they could do if they had an entire building.

Mt. Lebanon Municipality, which owns the building the society occupies, wants to sell it. Since last year, historical society board members, led by President Jim Wojcik, have been negotiating with the municipality over a purchase price and other conditions, such as parking and a loan for building improvements. Last year, the commission unanimously passed bill No. 8-13, giving the society the right to negotiate directly with the municipality for the purchase of the building without a public bid process. Wojcik says negotiations are going smoothly, and he expects a finalized agreement by early June.

“Mt Lebanon municipality is very much supportive of the historical society purchasing and renovating a highly visible property along Washington Road that will expand their programming to the public and assist in preserving a historical property to its former glory,” says Commissioner Kelly Fraasch, who serves as a liaison between the society and the municipality. “The variety of resources devoted to this project will only benefit future generations just as residents today have been undoubtedly enriched by past resident’s preservation efforts.”

“When you think of history in Mt. Lebanon, I want the Mt. Lebanon History Center to be the first place you go,” says Wojcik. Once purchased, the building will need major renovations to turn what has been office space for the last several decades (South Hills Area Council of 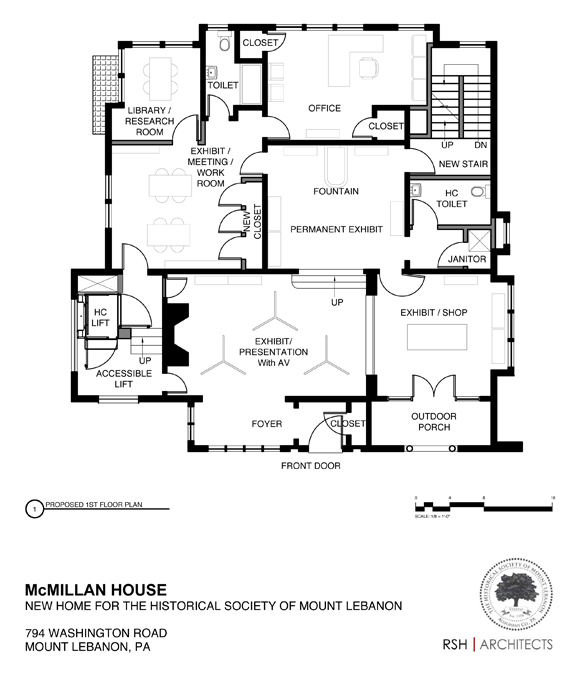 Governments currently occupies the first and second floors) into a history center with meeting and research rooms, exhibit space and storage of 2,200-plus square feet. The historical society has retained RSH Architects—a firm with strong ties to Mt. Lebanon and a solid background in restoration work—to draw up plans and cost estimates.

The cost for all this? About $2 million—$1.1 to purchase the property and renovate it and $900,000 for a maintenance and staff endowment. With paid staff, the society, currently open only Thursday and Saturday mornings and by appointment, can extend its hours.

Karen Petrucelli of KP Consulting conducted a capital campaign feasibility study, interviewing 46 Mt. Lebanon residents, including 10 historical society board members, to assess the level of potential financial support. Although 77 percent of the people interviewed said they were willing to contribute to the campaign and another 15 percent said “maybe”—a good indicator of community support—these people were not willing or able to make the very large donations the project needed.

Petrucelli recommended that the society take some time to raise its profile in the community. She suggested developing a strategic plan, adding new board members with specialized expertise and implementing a “friend” raising initiative, hosting programs that would expand the society’s visibility, and increasing collaboration with other local nonprofits.

Study results in hand, the historical society board has broken its original plan down into phases to space out expenditures. The $450,000 phase one, expected to be completed in early 2015, will focus on structural and HVAC issues and prepare the first floor occupancy with an ADA accessible bathroom and sprinkler system. Once phase one is completed, the new center, with a Washington Road entrance, will open.

Phase two, expected to be completed in late 2015, will convert the basement into a multipurpose room with new restrooms and a kitchenette and also restore a stained glass skylight—a feature of the house when McMillan lived there.

In phase three, a wood deck will be installed on a flat section of roof. The society plans to rent out the rooftop deck and the basement meeting space for special events. In the last few months, the society has begun crafting a strategic plan, added two new board members and formed subcommittees tasked with increasing visibility.

A new website will debut this summer, and several events are in the works, including a bus tour of Mt. Lebanon’s diverse architecture scheduled for Thursday, June 26. In addition, the society has applied for a $50,000 grant from the Pennsylvania Historical and Museum Commission (results to be announced in September) and state Rep. Dan Miller has pointed out other grant opportunities. Longtime Mt. Lebanon resident Matt Kluck, who demonstrated his commitment to local history as liaison to the historic preservation board during his recent four-year term as a municipal commissioner, has stepped forward to chair the capital campaign committee.

“Matt sees the need for a permanent history center in Mt. Lebanon and strongly believes in this,” Wojcik says.

Wojcik says the capital campaign will run for one year, and he is confident that by early 2015 work on the first floor will have begun. The entire renovation should be completed by the end of 2016. There will be opportunities for naming rights. “Think about how great it would be to have your name on the front of the new Mt. Lebanon History Center or have a room named for your family or in memory of a loved one,” Wojcik says.

For information about the campaign contact Kluck at mattkluck@verizon.net or the society at info@lebohistory.com.