eekeepers and scientists who love honeybees keep using the same word to describe them: “fascinating.” Enthusiasts say once you get stung, literally and figuratively, the fascination for these industrious creatures gets in your blood, and there’s no turning back.

Keeping a colony of active bees has quite a few benefits. We know their honey was prized by ancient Egyptians, Romans and Chinese to heal wounds and as a remedy for gut maladies, cough, sore throat and earache.

Bees use propolis, a waxy glue-like substance they create from plant fiber, to seal cracks in the hive; its anti-inflammatory and anti-fungal qualities recommend it to humans. The prized honeycomb, packed with freshly made honey, has been a treat for as long as honeybees have lived. Beeswax for candles, and royal jelly—a viscous white superfood bees produce for their queen—is said to have human health benefits, too, with  protein, vitamins and fatty acids.

For more than 120 million years bees evolved right alongside flowering plants, pollinating and increasing their numbers.

Bees pollinate crops around the world and can increase crop yields by as much as 30 percent. In any area where there are not enough pollinators available, food production suffers.

Beekeeping can be a solitary hobby, but more often, novice beekeepers want to learn all they can about these fascinating creatures, so they gravitate to local groups to share their enthusiasm or find a mentor.

For Todd Myrah, beekeeping had always sounded interesting. He’s already halfway into urban farming, looking after five chickens and a coop on his property. A manager at Empire Music, Myrah became friends with one of his regular customers, who was a beekeeper himself. After a few conversations, he was invited to see his hive, and it didn’t take long for him to get hooked.

To get started with a hive and bees, the initial equipment outlay is about $600 to $800, he says. Myrah started his purchase with about 1,000 bees and two hives. A honey extractor harvests the honey while keeping the comb intact. A protective bee suit is a must, as is a smoker, which spreads slow-burning smoke around the hive, calming the bees to make it safe to remove the lid to inspect the colony.

Inside the hive is a box called the “super,” containing the honeycomb: octagonal cells built by bees to protect where pollen and honey is deposited. The comb serves as the bees’ “Tupperware,” as Myrah calls it, where they store honey and pollen to feed their larvae. “It’s like watching an airport,” he describes, bees flying in with balls of pollen to make “bee bread” to feed the developing larvae, along with the honey. “It’s like a Red Bull for the bees,” said Myrah.

Additional boxes below are homes to developing bee larvae, and the all-important brood chamber of the queen bee, fed and bred to produces eggs by the thousands.

“I’m just fascinated by this colony; they’re highly intelligent insects. It’s so interesting to see how they work,” Myrah said.

Every worker bee has a specialized role, he explains. Forager bees seek out and deliver nectar and pollen to the nurse bees, who remain in the hive all day to feed the developing larvae. Undertaker bees collect and dispose of the dead bees at the bottom of the hive. Guardian bees are the hive’s security detail,  attacking invaders who come in too close.

Ever heard an angry bee before it strikes?

“That low hum starts to get louder as their wing speed increases,” Myrah said. “Then they start dive-bombing into your face.” Even in a protective suit, Myrah has been stung. “Don’t let things get to that point,” he cautioned.  “Five feet away is okay.”

Myrah’s bees are producing copious amounts of honey.  “It’s so fresh tasting, and not overly sweet like the stuff they carry in the store.” Plus, the size and number of his garden blooms have increased over the four years he’s been beekeeping, report his neighbors.

Myrah’s tip for success is simple: “Let the bees be. Don’t be invasive.” Beyond periodic checking for the presence of parasites or mites, he leaves them alone to let them do what they’ve been doing for thousands of years. In the four years he’s been keeping bees, he hasn’t lost a hive, and he has doubled his crop of honey from 24 to 48 bottles over the past two years. “I must be doing something right.”

One day in May, 2014, Mt. Lebanon tennis players were greeted with a huge swarm of bees congregating on one of the net posts at the tennis center. Needless to say, nobody was playing on Court #12 that day. After a  Google search for local beekeepers, recreation director David Donnellan reached out to Country Club Drive resident John Crist to try to take care of the problem. As it turned out, the swarm was from one his hives. He was able to identify the swarm because he marked his queen’s bodies with paint, and he saw his queen in this swarm. He sedated the bees with smoke and sugar water, and retrieved them with a shop vac.

Crist, a retired clergyman who worked at Mayview State Hospital, attended a lecture at a demonstration garden at South Park where a representative of Burgh Bees, a Pittsburgh beekeeping group, spoke about bees, beekeeping and the life of a queen bee. Ten minutes into the lecture and Crist was hooked. He immediately signed on for their Beekeeping 101 class. “The culture of bees was so exciting to me,” he says, “I knew I had to learn more.”

As he was planning his hive and purchases, Crist checked with his close neighbors about possible bee allergies and discovered a neighbor’s small son was highly allergic to bees, so there’d be no backyard hive.

But that didn’t slow him down.

That winter, he purchased two packages containing 10,500 live bees and a queen (fun fact: 3,500 bees weigh about one pound) which arrived at the end of April 2010.

Numerous inquiries and phone calls led to a grandson of the Gilfillan family, who gave his go-ahead to establish two hives on his family’s farm property—the outbuildings and 15 surrounding acres were given to the Upper St. Clair Historical Society by Margaret Gilfillan, the last of the family, who died in 2001. Later that summer, Crist helped capture three swarms to populate three more hives. Now he had five. He also established two more hives for the Scott Township Conservancy.

Eventually, Crist had to set aside hands-on beekeeping; “The heavy lifting and carrying it required became too hard on my back.” He’s still active in the Beaver Valley Beekeepers Association, where he mentors aspiring apiarists, passing on his enthusiasm for bee culture, and, if they’re lucky, he’ll share some tips on capturing and re-homing a whole swarm.

Crist went all in on his fascination with beekeeping. At one point during his beekeeping days, he was caring for 25 hives in six locations.

Western Pennsylvania is a hotbed of beekeeping, he notes. “There are about 2,000 beekeepers in Allegheny County alone.”

His advice for a novice bee-tender? “My initial interest in beekeeping was to learn about the bee culture,” he explains, “but the learning curve for beekeeping is steep. Know your ‘why.’” 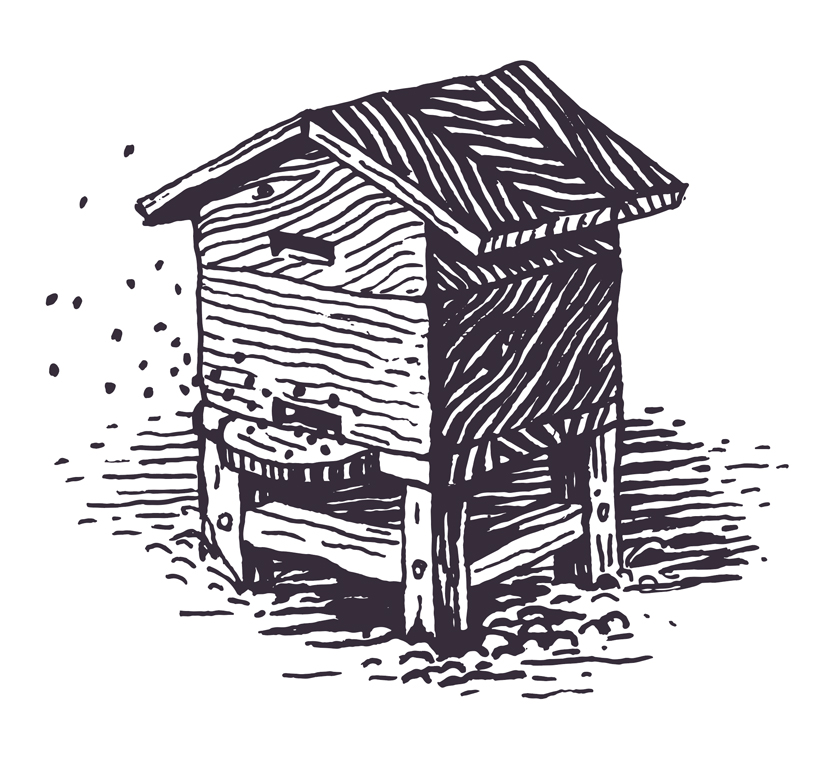 THE RULES ABOUT BEES