Historic Virginia Manor will draw people from all over the region to Mt. Lebanon, Sunday, November 20, from 11 a.m. to 5 p.m., for the Pittsburgh Symphony Association’s third annual Symphony Splendor Holiday Home Tour. The first floors of eight elegant homes on Osage and Valleyview roads (and one just across the street on Midway Road in Old Virginia Manor) will be on the tour, all beautifully decorated for the holidays. 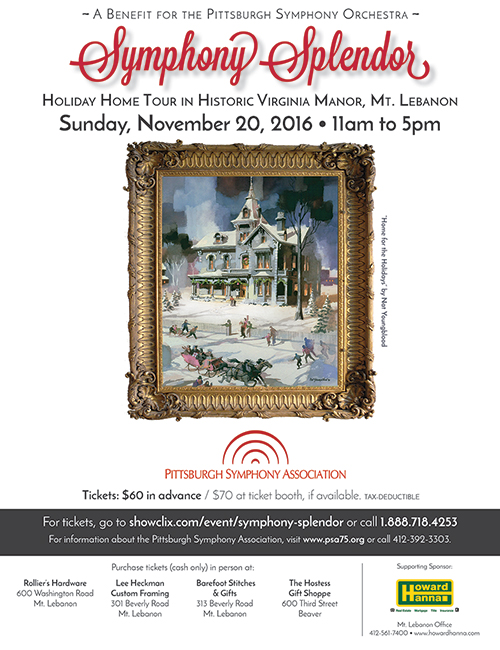 The fundraiser draws about 2,000 people and has raised $150,000 for the orchestra over the past two years. This is the first time the event is being held outside the city of Pittsburgh—and Mt. Lebanon is a fitting place for several reasons. First of all, nearly 30 members of the Pittsburgh Symphony Orchestra live here, and secondly, Symphony Splendor founder Millie Ryan lives in Mt. Lebanon in the Hoodridge area. Also fittingly, the tour is sponsored this year by the Howard Hanna Mt. Lebanon office, thanks to its manager, Patrick Gray. Hanna agents Vera Purcell and Cindy Sunseri helped select the houses for the tour.

Ryan, who co-chairs a committee of 20 along with Connie Phillips of Fox Chapel and Cathy Trombetta of Peters Township, puts hundreds of hours into planning the tour. She applauds the homeowners, ranging from parents of toddlers to empty nesters, for opening their doors for the benefit of Pittsburgh’s world-class orchestra. “There is such energy being put behind this tour,” she says. “People are graciously welcoming guests into their homes to show what they have done to maintain the architectural integrity and to show their lives.” Unlike some of the impressive old mansions previously featured on tour in Shadyside, “These are real homes that are being lived in—the charm is that these people have families,” she says.

One homeowner whose home will be on tour says he is pleased with the cross section of architecture and interior design: “They range from traditional to transitional to contemporary. They’re all different and all lovingly, caringly decorated.” His house, one of Virginia Manor’s signature English stone Tudor revivals, was designed by well-known architect Tom Garman, who designed several other houses on the tour. Virginia Manor’s developer, James Duff, hired Garman as the plan’s official architect, and in that role Garman reviewed and approved plans for all the houses built in Virginia Manor from 1926 to 1954.

The three large stone Tudor revival houses on the tour feature steep slate or tile roofs, leaded and stained glass windows and gables. Several have balconies. All are beautifully landscaped, some in the English formal garden style, others in the cottage garden style. Among the mix of homes also are a “storybook” Cotswold Cottage, a stone Cape Cod, a large ranch with an open floor plan and two stone colonials, one featuring a massive twostory addition with Palladian windows. In fact, most of the homes have additions that complement the historic architecture, and all have state-of-the-art kitchens.

Many of the homeowners will have their collections on display, ranging from antique furniture, oriental rugs and Georgian silver to paintings, pottery by regional artists and heirloom glass.

Docents from Pittsburgh History and Landmarks Foundation will greet visitors at each house with a brief presentation about the architecturally significant features. Other docents will be stationed throughout the houses to answer questions or call attention to points of interest in the various rooms. As guests tour, they will enjoy holiday musical and choral performances by groups from all over Pittsburgh, including some from Mt. Lebanon. More than 100 docents and 200 musicians volunteer for the event.

Purchase tax deductible tickets in advance ($60) at: showclix.com/event/symphony-splendor or 1-888-718-4253, or purchase advance tickets ($60/cash only) at Rolliers on Washington Road or at Barefoot Stitches and Gifts or Lee Heckman Custom Framing on Beverly Road. Day-of-tour tickets ($70, cash only) will be available only at the indoor ticket counter in the Manor Oak Two office building on Roessler Road up behind Manor Oak Shopping Center. Park there, and take a Molly’s Trolley to Virginia Manor.  Advance ticketholders may exchange their tickets for programs with addresses either at Manor Oak Two or at the drive-through booth in the Jefferson Middle School parking lot, 21 Moffett Street. Parking will be permitted on Mt. Lebanon streets, so long as signs do not expressly prohibit it.