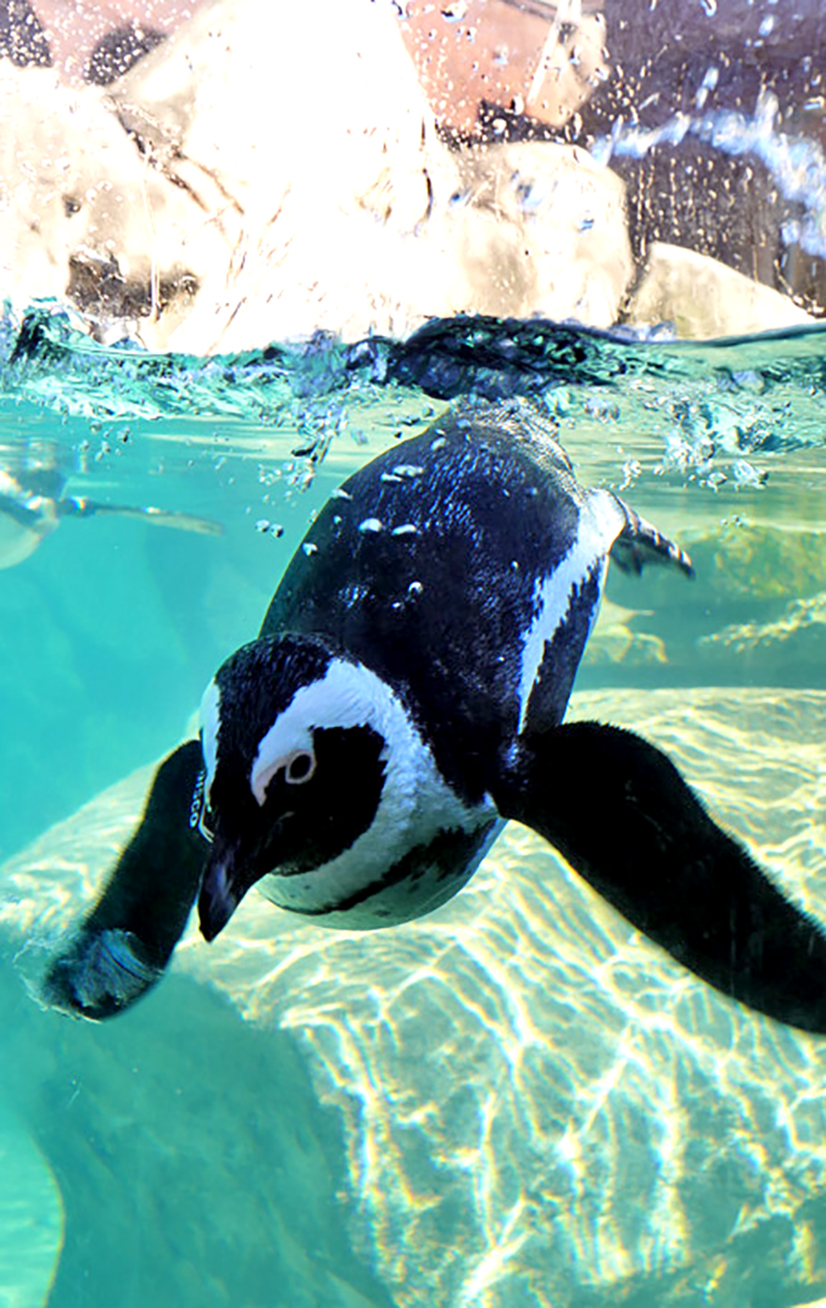 I had lunch with Sidney the penguin. His baby mama, Bette, ate out of my hand. Literally.

Sidney, Bette, Mary Beth, Disco, Slippy, Holly, Stanley, Flower and Patrick are just a handful of the African penguins who live at Pittsburgh’s National Aviary, on the North Side. And thanks to a new private feeding program, you too can sit inside the habitat and hand them whole anchovies, herring, sardines and capelin as you learn how the aviary and other conservation organizations are trying to save these beautiful, endangered birds.

Escorted by senior aviculturist Chris Gaus and marketing director Carly Morgan, I “geared up” with waterproof pants, galoshes and latex gloves. Then I got a quick primer: Hold each fish with the head towards the penguin’s mouth, about a third of the way behind the head so the fish doesn’t get floppy … but not so close that your hand gets beaked when the bird takes it. Hold it high enough that the bird’s head tilts back and don’t let go of the fish until the bird starts to swallow it (whole; they don’t chew!)

Gaus and I grabbed portable chairs and climbed into the habitat, called Penguin Point. As we fed the birds from a rather wet bucket of fish, we hollered out the birds’ names (conveniently printed on their wing bands) and the type of fish consumed. Volunteers logged how much each bird ate by name so the staff can tell who is eating a lot (could be ready to lay eggs, could be ready to molt!) or not so much (could be under the weather.) The gentle birds often looked at us with doe eyes. Some sauntered up to us to be fed; others stood in the back and preferred us to toss them their morsels.

A volunteer narrated the feeding for the Aviary guests, who watched from outside the exhibit.

The birds eventually got full and refused our treats, so I got to remove my gloves and stroke the feathers of Disco Dan Bylsma (named for the former Pens’ coach), a particularly mellow penguin, whose personality makes him more suited to hands-on greetings. Although many of the birds were raised from birth at the aviary (about 10 of the crew were hatched there, mostly offspring of Bette and Sidney!) some are not so thrilled to be handled. In the wild, they can be territorial, living in groups and guarding their burrows from interlopers. Guess that’s why “penguins” is a good name for a hockey team! In fact, astute hockey fans will figure out the Pens’ connections in the colony’s names.

Afterwards, Gaus, who has been at the National Aviary for 12 years and studied penguins for 16 years, gave us the lowdown on the species. The African penguins are from the southern and southwestern portion of the continent. It’s mostly a coastal environment with weather similar to Pittsburgh. So there goes the notion that these guys like the cold. In fact, their habitat is heated to counteract Pittsburgh’s frigid winter days.

The world has lost 98 percent of its wild African penguins, and they could be extinct within a decade, Gaus says. The cause is mostly human impact, from pollution to overfishing their waters and starving them. They have some natural predators too: sharks, seals, sea lions and orcas, plus land rovers like feral cats and dogs, hyenas and jackals.

The National Aviary’s penguins, who weigh six to 10 pounds each, are offered food three times a day, and consume 14 to 20 percent of their bodyweight every day (that’s like you and me eating 56 to 80 quarter-pounders a day, if we weighed 100 pounds … which I know I don’t.) The center has 20 penguins: 11 males and nine females. Two of them are juveniles and you can spot them by their lighter gray feathers. Like typical kids, they did some beak-jousting for us during play time.

No matter how much you squint, you can’t tell the males from the females, so staff tests their DNA to be sure. Guys have their names banded on a right wing, gals on the left. They do have the occasional “oops.” Patrick, named for the Penguins hockey team’s former division, is actually a lady. No matter. Guests had already become used to the name—so “Patrick” she stayed—and her band was switched to the other wing.

Once a year, the penguins undergo a catastrophic molt, when they lose all their feathers at one time and look rather pitiful. Penguins can’t swim or fish without feathers because they’re no longer waterproof, so they pig out in the days before the molt so they have extra weight heading into it. Indeed, Holly had been chowing for the last week and they suspected she was preparing for the event.

Penguins spend 70 to 80 percent of their time in the water, but since the aviary’s penguins are hand-fed they do not swim to eat as they would in the wild. They don’t fly but their keepers like to say they fly in the water when they flap their wings while swimming.

The aviary belongs to the Association of Zoos and Aquariums, which helps promote conservation. About 50 member facilities house a population of 1,000 African penguins, which are so rare they are not yet ready to be introduced back into the wild. They are bred with the goal of genetic diversity, which helps keeps the penguins healthy and avoids problems due to inbreeding.

One way you can help the endangered penguins is to support The National Aviary and its programs. Another is to make sure you eat seafood that is sustainably caught. For help on picking ocean-friendly seafood, check out: www.seafoodwatch.org

The National Aviary’s private feedings, which run from springtime through Thanksgiving, are offered daily at 1 and 4 p.m. for guests age 14 and up and cost $100 each, in addition to admission for nonmembers. You do need to be nimble enough to climb over a few rocks to access the habitat. The feedings are weather dependent so you would need to reschedule if it storms or the weather is otherwise incompatible. Guests older than 6 can also select the Penguin Encounter, which includes petting a penguin, taking photos and learning about the species for $50 a person. Both programs last about 30 minutes, although we found the staff eager to take time to answer all our questions. www.aviary.org or call 412-258-9445.