Say hello to a neighbor on your morning jog; scan through the tabloids at the grocery store’s checkout, or settle into bed with the latest best seller. Simple enough, but imagine the same routine in another country with a different language. That’s the daunting task facing many Greater Pittsburgh Literacy Council (GPLC) students. But GPLC tutors can teach them the necessary skills to not only survive but also to flourish in their communities.

“I might be one of the few people all week my students have an opportunity to speak English to,” says Mt. Lebanon GPLC tutor Julie Coyne.

Founded in 1976 from the home of Mt. Lebanon resident Mary Yardumian, the GPLC offers free literacy programs for adults, including English as a Second Language (ESL), GED preparation and employment skills. “Over half of my students in the South Hills are refugees learning ESL,” says South Hills Program Coordinator Peggi Kelley. Volunteers conduct tutoring sessions at several area locations, including the Mt. Lebanon Public Library.

GPLC will hold an ESL tutor training workshop at the Mt. Lebanon Public Library from 5:45 p.m. to 8:45 p.m., January 20, 21, 27 and 28. No foreign language background is needed, but teaching volunteers should have a bachelor’s degree.

Coyne began tutoring in 2006 after joining Lincoln School’s PTA to welcome a group of Russian refugees. “I enjoyed being with the refugees so much, and I remember thinking that teaching English would be another way to help these people,” she says.

“With ESL students, we’re not just teaching language skills;. we’re demonstrating a culture,” says Erica Pipitone, another Mt. Lebanon tutor. “You can speak another language in a class or take a test, but once you’re in another country and actually have to interact, it can make you timid and unsure.”

For Pipitone, volunteering with GPLC was an opportunity to get involved after having her son. With a graduate degree in adult literacy and previous work with transfer Japanese college students, she attended her first monthly tutor meeting in 2013. “As an older mother, the isolation I experienced helped develop compassion for others who weren’t interacting in the community at the same level they were in their home country,” she says. 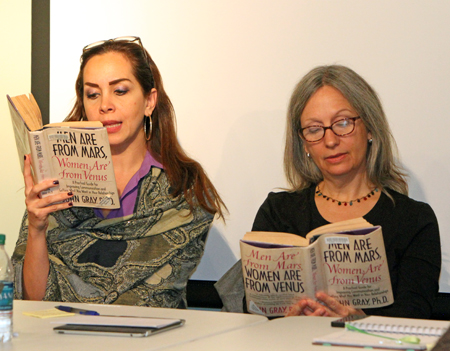 On Tuesdays throughout the school year, nearly a dozen GPLC students meet at the library to participate in Pipitone’s English Learners’ Book Club. Although these women come from countries including Japan, Syria, Lithuania and France, Pipitone notes their lives have woven together much like the quilts from Whitney Otto’s How to Make an American Quilt, one of last semester’s novels. “The books are departure points that generate discussions that take us off the books, but what we learn from one another in that time is priceless,” she says. “I haven’t had to leave the country, yet I get to interact with people from around the world.”

When they read short stories, each student brought a tale from her native country. And discussing Ruth Reichl’s recipe-laden memoir Tender at the Bone allowed the women to chat about a common love: food. “This might be my favorite building in all of Mt. Lebanon, maybe all of Pittsburgh,” Pipitone says of the library. “I love watching relationships evolve as the women encourage each other. I have the privilege of sharing life with them side by side.”

The GPLC serves 4,600 adults and families every year, with new students constantly added. “I always have students who are waiting for tutors,” says Kelley.

“As a tutor, I see that sparkle in their eye when they start using words more,” says Coyne. “I’ve grown to respect people who speak other languages.”

“This is an opportunity of a lifetime. The teaching is part of it, but the learning from each other is so much more,” says Pipitone. During one of her first sessions, she drew pictures with a student in order to bridge the language gap. A Japanese student even helped relate concepts in German to fellow classmates.

Although the English Book Learners’ Club breaks for the summer, the women still stay connected. In June, they volunteered to pack medical supplies at Global Links. “They might get sick of me saying it,” Pipitone says with a laugh, “but I always tell my women, ‘You’re my heroes.’”

For additional information about GPLC’s programs, visit www.gplc.org or call 412-393-7600.