Tony Richards moved to L.A. in 1983, he was a struggling performer waiting tables to pay his rent. Although practically broke, he scraped together enough money to pay for a voice lesson with the famed instructor and vocal coach, Lee Sweetland. Sweetland, who died several years ago, was known for teaching the principles of belting a song—projecting it without hurting one’s vocal chords. Richards was so hungry for this information that he walked the six-mile round trip to Sweetland’s voice studio. The following week, Richards received a call at the restaurant where he worked; it was Sweetland admonishing him for missing his second lesson. Embarrassed, Richards confessed he did not have the money to pay for a second lesson. To which Sweetland replied, “I didn’t ask you if you had the money. I asked you to come to your voice lesson.”

That moment changed Richards’ life forever—eventually catapulting him to a successful 30-year career and teaching, conveying the same musical principles to his students that Sweetland imparted to him.

But long before Richards made his way to Los Angeles or dreamed of marrying creative powerhouse Stephanie Riso of Pittsburgh’s Irish and Classical Theatre, he had to choose between becoming a professional athlete or a musician. Raised in Beaver County, Richards says he made it to the finals of the 1976 Olympic boxing team, but broke his hand so he was unable to compete. Around the same time, Richards’ voice teacher told him that Lawrence Welk was coming to Pittsburgh and suggested he sing for him. Richards took that advice, launching his music career in the process.

“I started touring with Lawrence Welk,” says Richards, “and then I realized I needed more work.”

So he left that stage to attend Birmingham Southern College getting a degree in vocal performance. After finishing school, Richards headed to L.A. where he met Sweetland.

Sweetland and Richards made a deal: Richards would observe Sweetland giving lessons to his paying clients, and in between these lessons, Sweetland would teach Richards for free. In exchange, Richards agreed that he would treat his future students with the same kindness.

“I watched for three years,” says Richards. Sweetland coached such music greats as Steven Tyler, Tom Jones, and Eydie Gorme. And as Richards mastered the principles of singing properly, his career began to take off. “Working with Lee allowed me to do whatever I wanted to do vocally,” he says. Richards sang with the San Diego and Los Angeles Operas, and then auditioned for a new musical coming to L.A., Phantom of the Opera. The audition was with Andrew Lloyd Webber.

After the audition, Webber asked Richards if he would sing a new song he had written. ‘“No one seems to like it,”’ Richards remembers Webber telling him. So after a few days of practicing it, Richards performed the song for Webber, who was so pleased he immediately had Richards tape the first demo recording of Music of the Night. 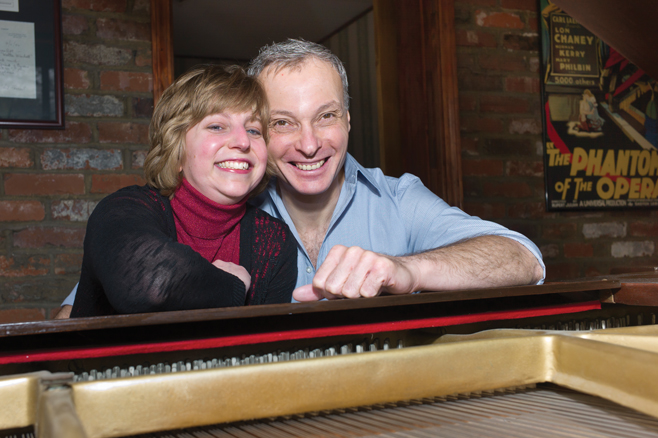 In the meantime, Beverly Sills had seen Richards sing with the L.A. Opera, and asked him to perform with the New York City Opera. Richards headed east. Later, he was tapped to play Raul in Toronto’s production of Phantom of the Opera.

In New York, Richards began teaching voice and soon realized that it was his first love. In 1995, he transferred his teaching career to Pittsburgh, when his father became ill.

Around the same time, his future wife, Stephanie Riso, graduated from Carnegie Mellon University with a degree in vocal performance. “I felt I had more work to do,” says Riso, so while her friends headed to New York, she remained in Pittsburgh to hone her skills. She performed with the Pittsburgh CLO, where she met her artistic partner Andrew Paul.

After many car conversations with Paul en route to performances, Riso told him, “I think you’d be a really good artistic director. Do it yourself, and I’ll help you.”

Although she gravitated to the organizational side of the business, Riso continued to perform. In one CLO production, Riso met a woman who “could sing anything. It was glorious,” she says. They became friends, and Riso learned that she studied with Richards. So in 1999, Riso signed on for lessons. “That’s how we met,” she says, adding that Richards’ teaching has given her voice a huge range: “Once I experienced that ‘aha’ moment, there was no turning back.”

There was also no turning back in their relationship—Riso and Richards were married in St. Bernard Church in 2002.

Riso’s career took another turn when she was accepted to the Lehman Engel BMI Musical Theatre Workshop for composers, lyricists and librettists. It’s “the Harvard of musical theater writing,” says Riso, and is free if you’re accepted. So in 2006, she and Richards moved to New York for two years. In addition, the pair was orchestrating Cabaret Pittsburgh, which brought national musical threater talent to perform in Pittsburgh, first at La Prima Expressa and later at the Renaissance Hotel from 2004-2009.

When Riso finished her training, the couple returned to Pittsburgh, and she rejoined PICT as its operations director. In addition, Riso turned her creative and organizational talents to developing Liplo.com. This website provides live streaming of theater productions and archives performances. Currently the site features productions from PICT as well as Cabaret Pittsburgh, and Riso is working to include performances from other nonprofit theater companies. Liplo.com has a model similar to on-demand movies—charging a modest fee to view performances.

“Liplo allows people to get their work out,” says Riso, and although it will never replace live theater, she hopes it will inspire people to attend live performances. “Nonprofit theater is a huge group that produces great work,” she says. The next generation has a comfort with technology; “we need to connect with that.”

One thing seems certain, Riso and Richards will be using their creative talents to influence Pittsburgh’s theater scene for years to come.