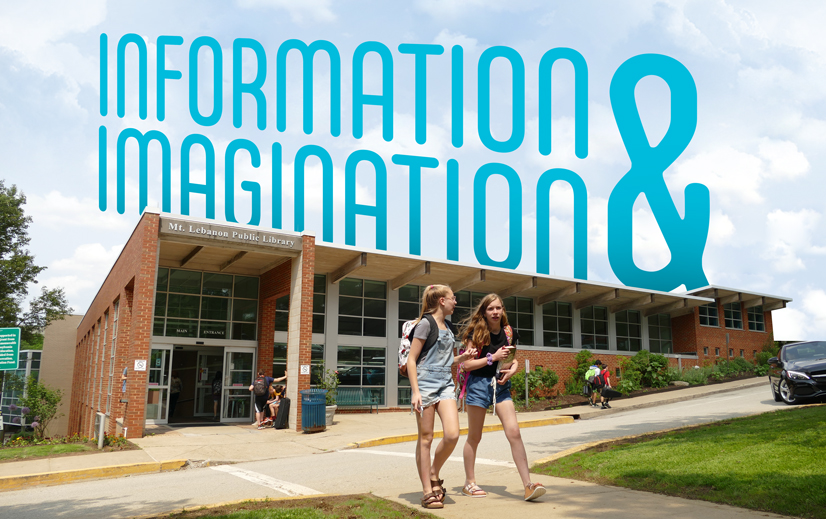 “It’s hard to get on the radar of people who don’t use the library,” says Mt. Lebanon Public Library Director Robyn Vittek.

Since we can now download and browse books on our phones, why would anyone need to go to a library?

But libraries were never simply about books. They are, and always have been, about information and imagination.

Sometimes that information and imagination is stored on ink-printed paper between two covers, or in ones and zeros on e-readers, but it also comes in the form of old family recipes passed on at a language conversation group picnic, original music kids created using borrowed instruments and library-owned music software or tips from an expert on how to make your roses look their best.

Author chats, history classes, book clubs, crafts and maker-spaces activities, board games, conversation groups and even sparking problem solving in the community—it’s all part of gathering at the library.

This year, the Mt. Lebanon Public Library is focusing on an initiative it calls  Friend Making; providing programs where people can bond over common interests and use that as a basis to form friendships.

“These are things we have always done, but maybe not articulated them as such to the public,” says Sharon Bruni, associate director for public services, who is spearheading the initiative. “Our staff is on the same page and we’re always thinking, when we do these programs, ‘how can we do little things to make them more welcoming?’

It’s becoming a lonely world out there,” she says. “This is a great place to come and not be alone.”

The library’s Italian Conversation Group has been meeting for at least 20 years. It’s composed of native Italian speakers, Italian-Americans, non-Italians who just love the culture and the language, people who regularly visit Italy and those who want to brush up on the lingo before taking a trip.

Sara Maruccio, a second-generation Italian whose parents both spoke Italian, moderates the group. As Maruccio grew up, she found she used her Italian less, but joining the conversation group helped her regain her skills.

She emphasizes that this is not like the language classes you remember from high school. “We’re friendly and accepting of all levels of the language,” she says.

Lino Amatangelo teaches beginning and intermediate Italian through the Mt. Lebanon School District’s continuing education program. A native of the Abruzzi region of central Italy, he is a regular at the sessions along with friend and fellow Abruzzian Elio D’Errico.

“I thought he could use a little more culture,” Amatangelo says with a smile. “My town’s bigger, you see.”

“My town’s better,” D’Errico responds. (Editor’s note: That exchange may have been the other way around. In true Italian fashion, everybody was talking over everybody else all through the interview.)

Terrell Jefferson (“Tranquillo,” since everyone in the group has an adopted Italian name), grew up on Larimer Avenue in East Liberty back when it had one of Pittsburgh’s largest Italian communities. He has fond memories of friends and also of food.

Jefferson, self-described as “not typically a joiner,” knew about the group for some time before he decided to check it out. His first time coincided with one of the group’s two annual picnics, and he was hooked, by the food and by the gracious welcome he received. “It’s like the room has a warm doorknob,” he says, “And it just gets warmer.”

In this year’s municipal operating budget, Mt. Lebanon commissioners only approved two part-time to full-time staff conversions, both at the library—Teen Services Librarian Katie Donahoe and Senior Library Assistant Marina Neilsen, who is focused on development and fundraising.

“The library staff has seen remarkable changes in how teens respect and feel about the library,” says Vittek.

Since assuming full-time duties in January, Donahoe has secured more outside partnerships for programs. Finch Robots, a CMU startup, will teach coding through robotics and the Carnegie Science Center will work with the library on several events in keeping with this year’s space-themed Summer Reading Club, “A Universe of Stories.”

Other space-related projects include screen printing of old NASA space tourism posters, in conjunction with Artist Image Resource, a nonprofit for artists and educators. Participants learn about the screen-printing process and go home with a cool T-shirt.

“We’re lucky to have a nice budget for these programs, and to have people from outside to teach,” says Donahoe. “There are a lot of great resources here. You just have to know where to find them.”

The library’s $2.3 million operating expenses were offset in part by $254,309 in donations and $83,057 in fines in 2018. The municipality allotted $1,342,130 for the library with additional funding coming from the state, including table gaming funds, and the Allegheny County Regional Asset District (RAD.)

When Nielsen was hired in 2016, there was no one on the library staff who specifically focused on fundraising. Nielsen, who had worked in development with the Pittsburgh Symphony Orchestra, took over coordinating of the library’s Love Your Library fundraiser in September, and grew it from 17 donations totaling $1,073 in 2016 to $10,516 from 267 contributors the following year. Last year’s total was 324 donations, worth $15,433.

“With the state budget having remained flat for more than 10 years, and RAD indicating that they may possibly reduce the funding allocated to libraries, we feel it’s vital to diversify our sources of income,” Vittek says. “We already rely on donated funds for many essential services, and we anticipate that need to increase in coming years.”

Library donations pay for all of the library’s programming costs—more than $30,000—and account for about six percent of the library’s materials collection budget. The donations have also covered extras such as a microscope and a model railroad in the children’s library and toys and early childhood education materials for the Family Place library.

The library’s fundraising group, Friends of the Mt. Lebanon Public Library, accounted for almost $70,000 last year, mostly from sales at the Book Cellar (a used book store in the library) and also from two special events: Brews for a Chili Night in January and the Beer Garden Bash in August, which brought in a total of $12,221.

Another well-known and large fundraiser is July’s Garden Tour and pre-tour party, presented by the library’s board of trustees. The party starts at 7 p.m., Saturday, July 13, in the library courtyard (weather permitting), with music by Steel City Calypso, champagne and hors d’oeuvres.  Tickets are $30. The garden tour is the next day from 11 to 4. Tickets for the self-guided tour are $15 in advance and $20 the day of the tour. Perennials will be on sale during tour hours at the library, and master gardeners and rosarians will be available for free consultations.

The library was one of 17 libraries selected by the Pennsylvania Office of Commonwealth Libraries to participate in the Turning Outward program, in conjunction with the Harwood Institute for Public Innovation, an organization that emphasizes local, community-based approaches to change. Funding for the program comes from a three-year state grant that expires in September 2020.

Mt. Lebanon Assistant Manager/Planner Ian McMeans was one of the team members who attended the Harwood training sessions. The first stage of Harwood’s process is to select people from all of Mt. Lebanon’s demographics and assemble them in small, manageable groups of library users. “They were ‘what would you like to see,’ rather than just a complaint session,” McMeans says.

The facilitators, which include library staff, McMeans and Mark Trumbull of the Community Relations Board, began the first series of community conversations in early 2018, convening groups of about 10 to 12 people. One theme that emerged from the discussions was a sense of social isolation for some people.

“Mt. Lebanon has a lot of established neighborhoods, and sometimes it can be hard for newcomers to integrate,” says McMeans. “You could be in a neighborhood with a lot of young families with school-age kids, and an active PTA, but if you don’t have kids, you can feel separated.”

The group did not suggest any drastic changes need to be made as a result. “The library is not the provider of everything, but can be a conduit to solving problems,” McMeans says. “How can we form partnerships and point people in the right direction?”

It’s totally natural. “That’s what a library is, right?” McMeans says. “A source of information.”