Charles Dickens would feel right at home in Dave and Collette Frankowski’s Florence Place house—well, at least in their living room for about two months every winter.

Like many families, the Frankowskis have a holiday decorating tradition. In this case, it’s a whimsical little village and train setup. Intricate and detailed, the scene is straight out of Dickens’ A Christmas Carol. In fact, a close look reveals Mr. and Mrs. Fezziwig, Bob Cratchit, Tiny Tim and Scrooge. But Dave doesn’t stop there. As the train chugs merrily around the perimeter, soldiers guard palaces, skaters glide across a frozen pond (well, a mirror), a one-horse open sleigh swooshes by, a boy hawks newspapers, men tip their hats to blushing ladies and patrons gather before pubs and shops.

Dave says the display evolved almost accidently. For years, he simply installed his old toy train under the Christmas tree in the dining room. But about a decade ago he found a train on the same 1/32 scale as his old toy soldiers, and his creative side went into overdrive. That year, he set up a 4½ foot  by 5 foot platform in the living room for the train and about 20 toy soldiers. Ever since, he’s been adding new buildings and figurines—all representing winter during England’s Victorian/Edwardian era. Three years ago, the display reached its current 9 foot  by 14 foot size with 100-plus soldiers and at least as many “civilians.” It now takes up an entire side of the living room.

“Thank goodness the front door is there,” Collette says, “or he’d keep going.” Despite the teasing, Collette loves the display. “At night, I turn off the house lights and turn on the tree and train display and sit,” she says. “It’s so peaceful.”

The Frankowskis are always expanding their collection, and networking with other collectors at conventions, including the Miniature Figure Collectors of America show in Philadelphia. Dave prefers unpainted pieces because they are less expensive, and he can paint them to best fit the theme. He uses enamel paint, adding teeny embellishments to the figures such as ribbons, buttons, mustaches and lace.

“Some people focus on the train and others the buildings,” Dave says. “Charles Bowdish [the man who in 1920 started what would become the Carnegie Science Center’s nearly 2,500-square-foot Miniature Railroad and Village] focused on buildings. But I love the people and soldiers.”

That love of toy soldiers dates back to his childhood when he played war with his friends (his lead soldiers always beat his friend’s plastic ones). There’s also a special reason why the scene is set in England—his mother was born there. “She was a war bride,” he says. “She came here in 1947 with only two suitcases.”

Today, what remains of his toy soldier collection—since stripped and repainted—now stands guard near models of Kensington and Buckingham palaces.

“I never know where I’ll find a piece,” he says. He’s purchased items on eBay and at garage sales. The palaces are store-bought Department 56 miniatures. A former co-worker dug the ceramic church out of someone’s trash.

Dave begins the two-day setup the Sunday after Thanksgiving. Even though he’s had the same basic layout for three years, he’s always tweaking and rearranging to make room for new pieces—new this year is a police officer nabbing a pickpocket. And he’s still trying to figure out how to incorporate a miniature hot air balloon he’s had for years.

Once the set up is complete, the Frankowskis photograph a section of the display and turn the picture into their Christmas card.

If you are invited to visit, you’ll receive a list of items to search for—four Union Jacks, two sleds, four people with lanterns, seven dogs, baby geese, etc. Dave say he got the idea after visiting the  Carnegie Science Center’s Miniature Railroad and Village, which offers guests a “can you find?” list. “I liked the idea because it made it more interactive,” he says.

Word of the exhibit is spreading. Collette says people have walked onto their porch and looked into their window to get a glimpse: “It’s like we’re Horne’s Christmas window display.” 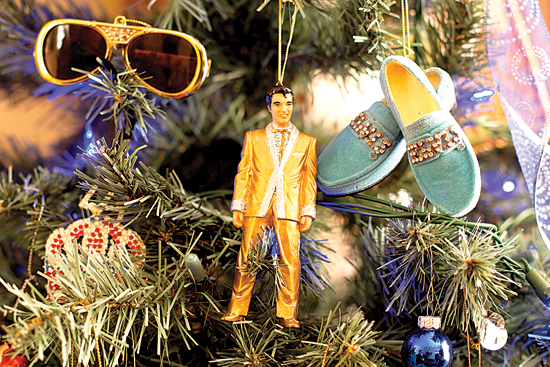 Collette Frankowski isn’t a lifelong Elvis fan, but in the 1990s she began accompanying her sister and cousin to Elvis events. Then one day it hit her: she really loved The King. For the past two years, she’s set up a special Elvis tree in her dining room that’s festooned with tiny Elvis statues and ornaments relating to Presley—blue suede shoes and gold sunglasses, for example. She received some of the ornaments as gifts; others she purchased at Graceland or Elvis conventions. At one convention she won a Department 56 Elvis set that includes a model of Graceland and a 1955 pink Cadillac. Those miniatures take a special spot on a buffet next to the tree. As a side note, her husband, Dave, has been known to don a white bejeweled jumpsuit and black pompadour wig—but that’s as far as the impersonation goes; he does not sing.

Last year we asked our Facebook fans to tell us about their special holiday traditions. To read the complete stories and see more pictures, go to https://lebomag.com/15187/i-have-a-theme-trees/ ‎