In 2010, a young mother walked into UPMC Presbyterian Hospital because she felt overwhelmed and unable to care for her three kids. When the doctors tasked with handling the case learned that foster care was the only option for this mother and her children, the seed for a “crisis nursery” was planted. Within months, a team of UPMC residents working with Pittsburgh pediatrician Dr. Lynne Williams, had interviewed 70 families in the city’s East End. Over and over, they found that children were being left in high-risk situations when caregivers were unable to secure last-minute childcare.

Motivated by the results of that study, Williams, OB-GYN Tammy Murdock and educational consultant Eileen Sharbaugh of Mt. Lebanon, founded Jeremiah’s Place, the city’s first and only crisis nursery. The nonprofit, located in the Kingsley Center in Larimer, is now open around the clock, and offers free, temporary, short-term care for babies and children age 6 and under.

According to Sharbaugh, a former preschool teacher at St. Paul’s Episcopal Nursery School, Jeremiah’s is intended to prevent child abuse by providing a safe haven when families are in crisis or experiencing an emergency situation and need safe care for their children.

“When families are in crisis, that’s when abuse can happen, that’s when kids are left alone or with people who they shouldn’t be with,” Sharbaugh says. “We want to get children before it happens and stop it from happening. We are there when parents are starting to slip and fall.”

Sharbaugh, who now serves on Jeremiah’s board of directors and also has worked with Outreach Teen and Family Services, has seen the need for supporting at-risk  families firsthand. Through the Children’s Home of Pittsburgh, she and her husband have fostered 12 children over a nine-year period.

“We know the importance of keeping families together, of helping a parent in the moment when they are completely worn out, when families are pushed against the wall,” she says.

LouAnn Ross is the executive director of Jeremiah’s Place. Ross, who has spent the bulk of her career in community advocacy, also worked for Teach for America in rural North Carolina. In that role as first-grade teacher, she encountered many families who could have benefited from a crisis nursery like Jeremiah’s Place. Though Jeremiah is the name of one specific little boy who needed help, “I had many Jeremiahs. I had many families who could have used the respite, the support,” she says. “We will serve kids well here.”

State Sen. Matt Smith, who lives in and represents Mt. Lebanon, has been a strong supporter of Jeremiah’s Place since its founding. He’s now a board member for the crisis nursery.

“As a father, I understand the need for a support system, and Jeremiah’s Place fulfills that need when family, friends and neighbors aren’t options,” Smith says. “I think that supporting Jeremiah’s Place is a natural fit when you realize that the earlier we can have a positive impact on children, the better their chances of becoming successful, productive adults.”

Sharbaugh and Smith aren’t the only locals involved with Jeremiah’s Place. Noreen Haggerty, Ella Street, was the first accountant for the nonprofit. John Schrott, Navahoe Drive, offered his expertise as an architect throughout the renovation of the space. Noelle Conover, Mt. Lebanon Boulevard, designed the Jeremiah’s Place website. Judy Albenze, Avon Drive, consults on ADD cases for the nursery. Eight of the nursery’s first childcare volunteers also call Mt. Lebanon home. Marc Field, Woodhaven Drive, is currently board chair. With the help of benefactors including Forbes Funds, Heinz Endowments and the Richard King Mellon, Hillman Family and Grable foundations, Jeremiah’s Place opened in April 2014. Within an hour of doors opening, it received its first visitor.

“At 8:47, I heard a tap at the door and it was a young mother with a child in a stroller. She had a job interview, but her babysitter had backed out. She’d already canceled one interview because she didn’t have childcare. We took the 11-month-old while she went on the interview,” Sharbaugh remembers. “She got the job! It was huge for her.”

“Every story is equally inspiring,” Ross points out.

Whether it’s helping a single father land a job to support his family or giving a safe haven to a mother who’s escaping an abusive situation, Jeremiah’s Place isn’t just focused on fixing the immediate need. The agency’s  mission also is focused on giving families the tools they need to be successful long-term. That’s why a social worker interviews every caregiver and child who comes through the doors, assessing each situation and providing any needed follow-up care.

“[The social worker] works with each family to develop goals and helps them connect to services and programs that already exist, which will bring stability and hope to their situation,” Sharbaugh says.

Kristen Glass is the staff social worker at Jeremiah’s Place. Glass, who has a master’s degree in social work from the University of Pittsburgh, grew up nearby and knows the neighborhood well.

“It’s important to have services that help strengthen families. Children are our future. They are the responsibility of the community,” Glass says. “We don’t have a sense of community anymore. People aren’t as involved as they used to be. Jeremiah’s Place is a step in the right direction.”

Jeremiah’s Place is also a model that Sharbaugh and Ross hope to recreate in other Pittsburgh communities. “Our goal is to become much more neighborhood-oriented—to have a north, south, east and west location, around the city,” Sharbaugh says. “That’s long term.”

NOT JUST A SAFE PLACE; A FUN PLACE 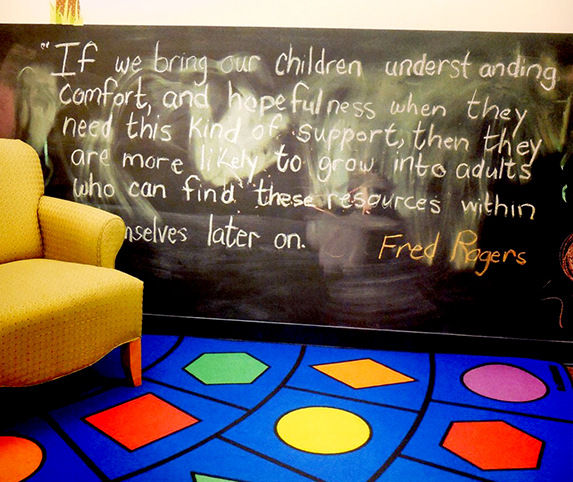 Although families find themselves at Jeremiah’s Place because they are in crisis, the nursery itself is a peaceful and happy space. The large main playroom is outfitted with baby swings and a diaper changing station. There is a kid-sized kitchen complete with tiny pots, pans and dishes. Costumes hang neatly in a row, waiting for a child to play cowboy, firefighter or princess. An art area is ready for a pint-sized Picasso to create a masterpiece. And in the corner, there’s a reading nook complete with books and a large stuffed bear to cuddle with. In that nook, right at a child’s eye level, there’s a chalkboard mural which reads, “You’re safe here.”

“We’re offering a soft landing for families, for children,” Ross says. “The difference in their lives—their lives will be less difficult. There will be a trajectory of benefits.”

In its former life, the space that now houses Jeremiah’s Place was a Head Start location. But renovations were done to make this more than just a well-equipped nursery school. Jeremiah’s Place now has three bedrooms, which can each sleep four kids. There’s also a living room, a kitchen and two bathrooms, and a washer and dryer. And none of the space has an institutional feel—just the opposite. With the exception of the humongous one-of-a-kind unicorn television, donated by the residents at Children’s Hospital, Jeremiah’s Place feels like a typical home.

“We believe a home-like environment will provide the warmth, compassion and support each child needs during this time of crisis or instability,” Sharbaugh says.

A child who comes to  Jeremiah’s Place is weighed, measured and given a brand-new backpack filled with new goodies (a blanket, pajamas, toothbrush and toothpaste, book and a stuffed bear) to keep.

“It’s so much a community effort,” Sharbaugh says.

Caroline Pryor, a Mt. Lebanon resident and Penn State student, is a volunteer at Jeremiah’s Place. She says the experience is more rewarding than she ever expected.

“I walk out of here exhausted,” she says. “But you make the children feel loved.”

“The number of Mt. Lebanon residents involved or connected to Jeremiah’s Place in some way is a testament to the community we have here,” Smith says. “We’re fortunate to live in a community where neighbors look out for neighbors. I think it is that understanding and sense of community ingrained in Mt. Lebanon that has led so many residents to contribute toward this effort.”

“We do have a real sense of community here in Mt. Lebanon,” Sharbaugh adds. “Most of us have neighbors or friends or colleagues who we can turn to when crisis hits or something unexpected happens. I had support, great neighbors, family, friends, church community, who would come alongside of me as I was rearing my children. But not everyone has that.”

Sharbaugh says many people want to help Jeremiah’s Place but they don’t know how. That’s why she reached out to Sen. Smith, who has offered up his four offices as drop-off locations for donations. Jeremiah’s Place always needs baby formula, diapers and baby wipes, as well as new clothes sizes 3T through 8/10. Sharbaugh also urges those who’d like to donate to visit the Wish List. 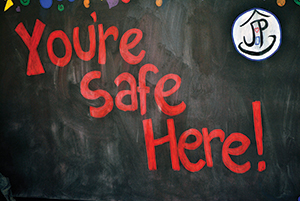 Jeremiah’s Place offers more than just help to families in crisis, Sharbaugh says; it also offers hope. In fact, the crisis nursery’s name was partly inspired by a biblical passage about hope: “‘For I know the plans I have for you,’ declares the Lord, ‘plans to prosper you and not to harm you, plans to give you hope and a future’ (Jeremiah 29:11).”

“These parents love their children. They are doing the best they can,” Sharbaugh says. “We want to keep families intact. We are giving families a sense of hope. We are offering a hopeful solution.”