Driving on Cochran Road, you might have noticed a spry woman wearing a bright orange safety vest with a garbage bag in one hand and grabber in the other. That is Sandy Dunlop, of Cochran Road, a Mt. Lebanon resident since 1968 who soon will be moving to Friendship Village with her husband, Graham.

The retired health and physical education teacher walks from Giant Eagle to Washington Road once or twice a week to pick up the trash that has been tossed from cars or dropped by careless walkers. An avid walker herself, Dunlop, 73, started to notice the garbage on her daily strolls many years ago. “I got to the point where I couldn’t walk past it,” she says.

Living so close to the entrance to Mt. Lebanon, Dunlop wants the area to make a clean, beautiful first impression on visitors. She believes when people see a clean community, they are less likely to litter.

Dunlop’s inspiration came from her involvement in the Beautification Committee, a group that cleaned up and made other major improvements along Banksville Road, which serves as a gateway to Mt. Lebanon. When the committee disbanded after a few years, Dunlop decided to keep going with the quiet but important cause on her own main street.

In addition to picking up trash, she has prompted others to take notice and act. For example, when she noticed that Wendy’s restaurant on Cochran Road did not provide trash cans outside their building and customers threw their garbage on the street, she talked to the managers.  Wendy’s now has trash cans in the parking lot.

Dunlop’s commitment has not gone unnoticed by drivers, many of whom roll down their windows to thank her for her effort. 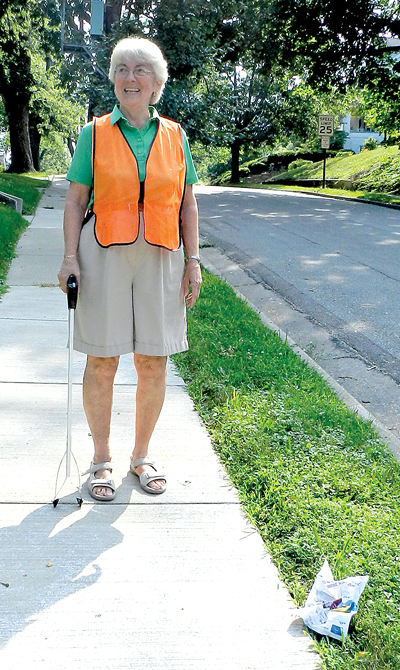 She’ll be missed when she and Graham move to a smaller, more manageable apartment at Friendship Village in Upper St. Clair, by many of the friends she has made through participating in organizations such as church projects or the women’s golf league—but especially by the people who value a pristine community.

Modest about her volunteer work, Dunlop agreed to be profiled only because she hopes her story might motivate someone else to get involved.  “I just wish more people would take responsibility of their neighborhoods,” she says.