When it comes to school shootings, we want to think it can’t happen here. But we know all too well that it has happened in communities just like Mt. Lebanon. Sadly, even after the tragedy in Sandy Hook that brought the nation together to say “never again,” there have been at least 50 school shooting incidents, resulting in 31 deaths and 56 injuries. School districts across the country are working with their towns’ first responders on plans for emergency response.

Mt. Lebanon School District has a critical incident plan in place that is updated and practiced regularly, says Cissy Bowman, director of communications for the Mt. Lebanon School District. It also has a safety and security committee—which includes representatives from police, fire and medical rescue—that meets throughout the year. With the help of the police and fire departments, the school district has conducted drills and tabletop training sessions; scenario-based training with students, teachers, staff and administrators, and has worked safety training into the curriculum. This summer Officer Scott Kunz of the Mt. Lebanon Police Department will conduct top to bottom physical security checks of every school and then work with administrators to further improve security. Over the past few years, several security improvements have been implemented based on the recommendations of the safety and security committee. 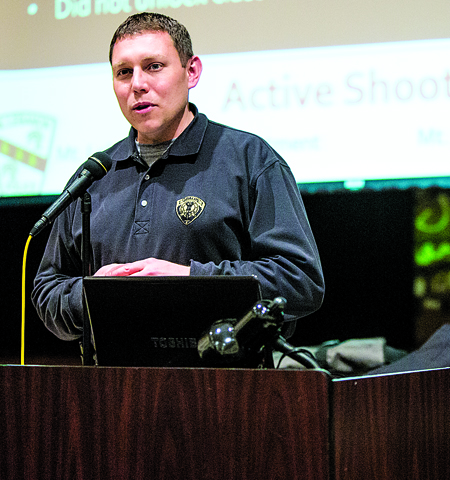 This past fall, Deputy Police Chief Aaron Lauth organized active shooter scenario-based training sessions for the school district’s teachers, administrators and even custodians. The sessions provided staff with the opportunity to see, hear and feel what an active shooter incident would be like. Lauth says that teachers have come away from these drills with a new appreciation of what might happen and what gunfire sounds like.

The training consisted of a 10-minute scenario, followed by a debriefing, and a two-hour presentation. During the drill for the middle schools, teachers were divided into eight groups and put into classrooms. In each group, one teacher played the role of the teacher, one a “disruptive” student (who would try to get out of the room) and the remaining teachers were students. Police officers were stationed in each room to assess the actions and to stop the exercise if anything went wrong.

Once the teachers were in the rooms and the doors closed, Lauth ran down the hallways firing a gun loaded with blanks. As the shots rang out, the sounds of scrambling for cover behind the closed doors could be heard. Then all fell eerily silent. Moments later an audio recording of a fire alarm was set off, accompanied by the sound of more gunshots. The doors remain shut and nothing but the alarm could be heard for many minutes until Lauth shouted “Stop scenario” and the doors opened.

The teachers then assembled in the auditorium for a debriefing, where the police officers gave them all high marks, saying they reacted quickly—locking doors, pulling down blinds, herding students into corners where they were kept quiet, and silencing cell phones (a ringing phone could alert the shooter). All the teachers did a good job of calming the disruptive student quickly and efficiently. Cpl. Paul Petras remarked, “If you [the teacher] maintain your composure, the kids, to a degree, will too.” Lt. Duane Fisher gave his class kudos for using a cell phone to call 911, saying that in such a situation you should never assume someone has already called for help and that if you are too scared to talk, you can just leave the cell phone on and the 911 center will triangulate the call’s location. Kunz then urged the teachers to prepare ahead of time—get familiar with how the door locks and the blinds work, know what items in the room could be used as a barricade and to talk to their students about what they should do if they find themselves in the hall when an incident begins.

Lauth asked the group how long, on average, they thought an active shooter incident lasts. The audience shouted out, 45 minutes, an hour, 30 minutes. In reality, school shootings last on average about 10 minutes—the exact length of the drill they just experienced.

In the past, such incidents lasted longer as the first responder would call for backup and then wait for them to arrive—the Columbine incident in 1999 lasted more than 45 minutes. Today, however, first responders will enter the school immediately. The Sandy Hook incident in 2012 lasted 11 to 14 minutes.

Throughout the presentation, Lauth urged teachers and staff to report anything suspicious and tell their students to do so as well. The 2006 Platte Canyon, Colorado, school shooting incident could have been avoided if the several people who had noticed an “odd” person hanging around the school had reported the individual. Teachers are told to use their common sense and call for a lockdown if they feel it’s warranted. If they think they can evacuate the children safely, they should do so, but otherwise they should lock the door, hunker down and hide. “Hiding works,” says Kunz, and Lauth adds that police response time is about two to three minutes.

The teachers left with the following advice: prepare mentally, be aware of your surroundings, stay alert, talk to students, use common sense and don’t fall into mentality that it can’t happen here.