The Mt. Lebanon recreation department staff knew when they scheduled Kendama camps this summer at the recreation center that it would be popular, but they never expected a waiting list and a wave of excitement. Pictures of the camp are scattered throughout this post.

Kendama has its roots in 18th-century Japan, but when the traditional cup-and-ball game first appeared on the shelves of the Galleria’s Learning Express last winter, modern-day teens and tweens couldn’t get enough. “We brought in a small order in December of last year and once word got out to the middle and high school kids that we had it, they started selling right away,” says Learning Express owner David Bahm. 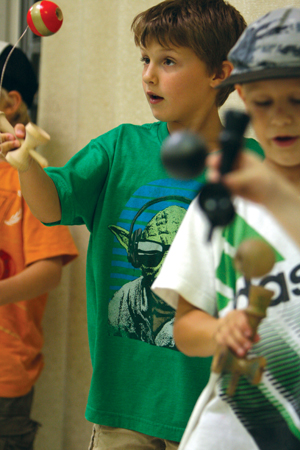 When you compare the wooden toy to other recent fads in entertainment, kendama is decidedly low-tech. A kendama looks like a wooden “T” with a ball attached the handle by a string. On each edge of the “T,” there is a small cup for the ball to rest in. On the top of the kendama, there is a spike that the ball — which has a small hole in it — can sit on. The idea of the game is to catch and swing the ball using the cups and spike. Much like a yo-yo, players can challenge themselves and others to perform tricks and develop techniques. “There are a large number of different tricks that kids can do,” says Bahm. “They all involve catching, balancing or swinging the ball.” Players can customize their kendama, too — the toy comes in different styles and colors.

Cup-and-ball games like kendama have been played for centuries, but that hasn’t lessened its appeal in Lebo. Strangely, kendama’s spread has been limited to the area. The Learning Express in Cranberry tried to replicate the craze with little success. “There has been some success in St. Clair, but nothing like in Mt. Lebanon,” says Bahm. In fact, two Mt. Lebanon High School grads, Colin Sander and Zack Yourd, have appeared as members of the pro team for Kendama USA, one of the nation’s premier kendama manufacturers. Yourd taught the kendama classes at the Mt. Lebanon Rec Center.

Learning Express saw such a demand for the game that David and his wife Amy, who co-owns the store, began hosting a weekly after-school kendama club at the Galleria location. Club members split off into groups by skill level, help younger kids out with techniques and challenge each other to tricks, and the store provides snacks. The Bahms have also raffled off prizes to kendama players in the past. While middle and high schoolers are the toy’s target audience, David notes that kids as young as 8 years old can enjoy the game. The club went on hiatus as sales dropped off during summer break, but as of August, Bahm plans to start the club up again when school starts in the fall — if the fad hasn’t fizzled out. “It’s a nice thing for the kids to do,” he says. “If there’s a demand, I’ll be there.” 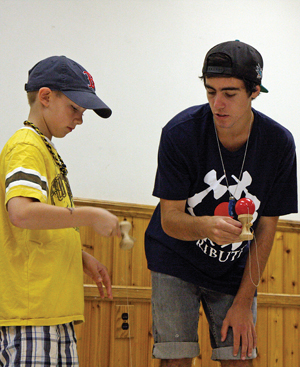 We’ll let you know if the Rec. Department schedules another camp.