It was supposed to be a simple assignment for an experienced journalist: interviewing visiting research patients for a Pitt newsletter. Instead, it took Mt. Lebanon’s Niki Kapsambelis on a life-changing journey that would culminate with her first book.

Her book The Inheritance tells the story of the Galen and Gail DeMoe Family of Tioga, North Dakota, their rough-and-tumble upbringing in a family of six children—Doug, Dean, Lori, Karla, Brian, and Jamie—in a tight-knit community. The DeMoe family carries a rare (1 percent) genetic mutation that guarantees early onset Alzheimer’s starting in the mid-30s, with death about 20 years later. There’s no treatment, and no cure, and a 50 percent chance of passing the mutation on to children.

That evening’s 2009 interview in a Pittsburgh hotel room was with four of the six DeMoe siblings (and assorted grandchildren) visiting the research team at Pitt’s Alzheimer’s Disease Research Center (ADRC). The DeMoes made Pittsburgh a second home as dedicated research subjects for the scientists of the Dominant Inherited Alzheimer’s Network, at the ARDC, a nationwide consortium studying their rare genetic mutation known as ‘autosomal dominant.”

The interview lasted two hours, remembers Kapsambelis, a Piper Drive resident. “I was immediately very comfortable with them,” she says. When she got to her car, her hands were shaking; she was fumbling with her keys. She’d been overcome by their words, and their commitment. “I’ve met a lot of people, but their story was extraordinary. I thought, someone should know what they did.”

Her book richly chronicles the disease’s effect on the DeMoe clan: the tragedy, heartaches and the raw courage of the people she came to love like a second family; the disease’s history, victories and failures, the plot twists between pharma companies and researchers, and the deep tenacity of the scientists searching for a cure.

Alzheimer’s disease is a scourge, and it may happen to you or someone you love: it’s the sixth-leading cause of death in the U.S., affecting more than 5 million Americans, and killing more than breast cancer and prostate cancer combined. Your chance of getting it doubles after age 65, doubling every five years to age 85, where the risk hits 50 percent.

ADRC researchers William Klunk, a geriatric psychiatrist, and Chet Mathis, a radiologist, have spent many years and endured multiple failures researching a compound dye to inject into a living brain with Alzheimer’s, in order to see the disease’s progression via radiography. In 1996, they finally hit on PiB, or Pittsburgh Compound B. This red dye successfully crossed the blood-brain barrier and they were able to see the cottoney clumps of amyloid, which prevent crosstalk between brain cells, from the living brain of a young woman with Alzheimer’s: a major development toward understanding the disease and finding a preventive.

Kapsambelis considers the DeMoes a second family. She’s vacationed with them, shared speaking engagements with them, enjoyed their family reunions, and gave the eulogies at two of the siblings’ funerals: Lori and Doug. She plans to travel to Amsterdam for a family wedding next year.

A Boston native, Kapsambelis started as a sports writer for the Boston Herald, then went to a New Hampshire daily; she transferred to the AP in Los Angeles, where she covered the Emmys and the Michael Jackson trials. To be closer to family, she eventually relocated to Pittsburgh, curtailed her travel and raised two sons, Bobby, a 2019 Miami University of Ohio graduate, and Tim, a freshman at the University of Minnesota. Both sons, like their mom, play hockey. 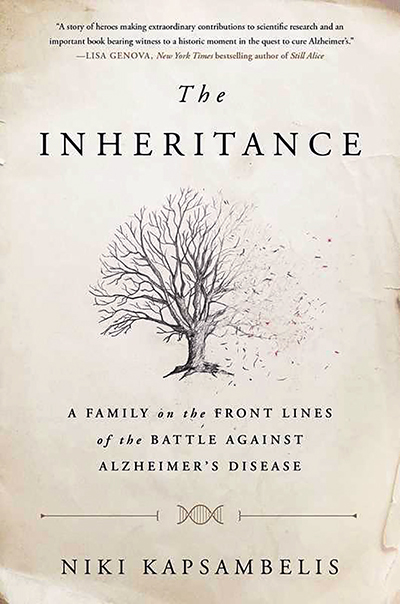 A former women’s league player, she also coached youth hockey and is a skating coach for the Pittsburgh Hornets and the South Hills Amateur Hockey Association (SHAHA). She still takes to the ice in an adult league, takes the occasional guitar lesson at Empire Music and, of course, takes time to read.

When asked what bothers her most about this disease, and its ranking among the other diseases of our time, Kapsambelis didn’t hesitate: “Nobody cares!” she shot back, eyes wide. “You are—we all are—going to pay for it,” she says. “As the population of baby boomers age, we have a ‘silver tsunami’ coming which will overwhelm our system, and cripple our economy.”

In treatment dollars, the impact of Alzheimer’s is staggering: in 2016, it came to $236 billion, taking up 1 in 5 Medicare dollars. By 2050, that figure will jump to 1 in 3. “We need bipartisan support for more Alzheimer’s research,” she states. “This is the medical pandemic
of our time.”

Lori DeMoe, who died of Alzheimer’s in 2016, echoed her siblings’ commitment to the research program. “This is my salvation. It gives meaning (that) it wasn’t for nothing. I’m going to do something in this fight. It won’t help me, but I’ll make the world better when I leave.”