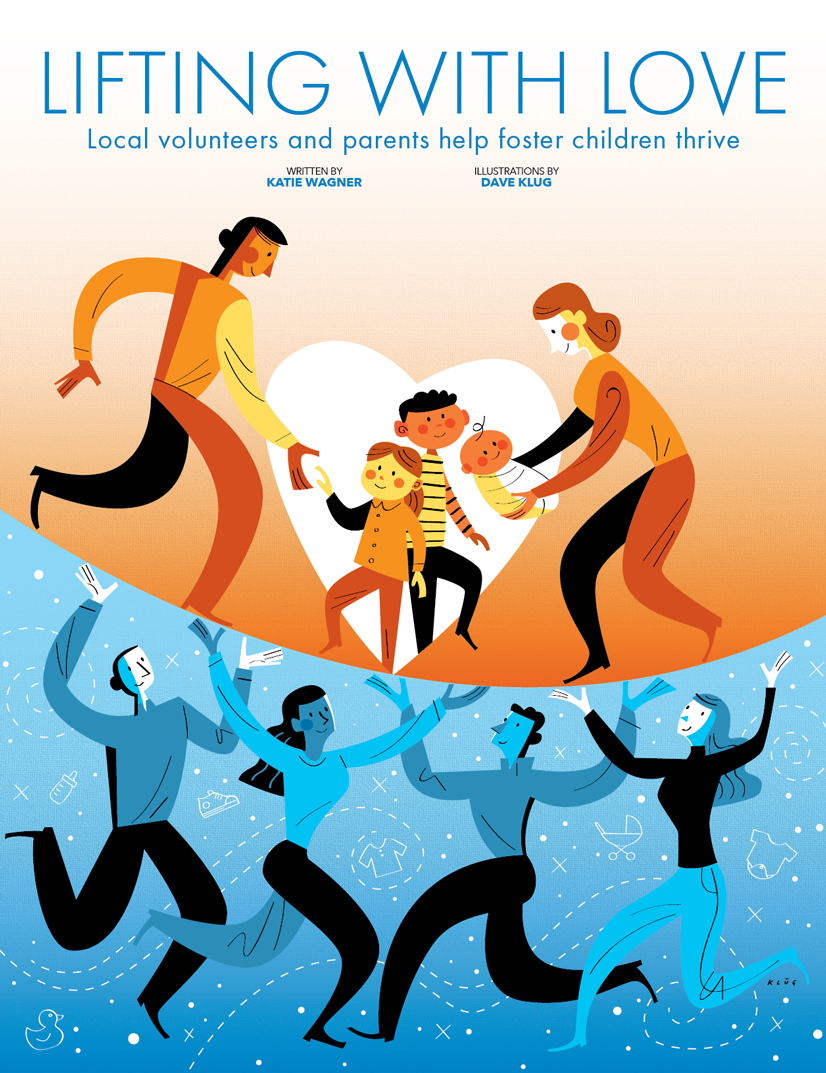 Your phone rings. It’s too early in the morning to be anyone but the agency. Sure enough, a 16-month-old set of twins needs a home immediately, and you have to come and get them in an hour. You specified that you would be open to fostering an infant, but you aren’t prepared for two children, and you know that each of them will come to you with, at most, one bag of belongings and nothing more.

A similar situation happened recently to Julie Smith, Longuevue Drive. So after quickly preparing her house, one of her first calls was to the Foster Love Project.

“I needed an extra car seat and an extra Pack ’n Play or crib, and I needed it right away,” says Smith. “To be able to call Foster Love and go over and get a few things like those has really helped.”

The nonprofit Foster Love Project, founded by South Hills foster parent Kelly Hughes in 2014, has a donation center on Potomac Avenue in Dormont, which provides essentials to foster parents and allows children to select items that they can make their own, like clothes, toys, games and bedding.

“They even have preemie clothes. Those are hard to find in the store, so when you get a call for a preemie, it’s great to know you can go there,” says Smith.

She and her husband, Scott, own East End Brewing Company. It was always part of their plan to adopt and hopefully have a biological child, and 20 years ago, both of these events nearly coincided. The couple went to the airport to pick up their daughter, Ella, who spent her first 18 months of life in a children’s home in India, and their son, Otis, was born eight days later.

“Over the years, we found ourselves thinking ‘Wow. We’re really fortunate.’ We had such solid upbringings, with supportive families. And we knew we wanted to give as much as we can,” says Smith. “We had our hands full raising Ella and Otis, but then I turned 50. My kids didn’t need me as much anymore, but I still needed to be part time at the brewery, so going out and getting a full-time job wasn’t going to happen. We just thought ‘fostering is probably for us.’”

Ella, who has special needs, required a lot of therapy in her earlier years after her time in the children’s home, and it made them realize how important that age can be in a child’s development. For that reason, they decided to request fostering children ages 0-2 with special needs or medical conditions, who may need extra attention.

That was five years ago. So far, they have had 10 placements, including two sets of twins, plus respite placements, meaning they temporarily housed children from other foster families while the caregivers were on vacation or a similar circumstance. Their shortest placement was only two days—the child’s grandmother came forward and decided to take her in—and their longest was a year.

“It’s very emotional. Also very physically taxing because of the kids’ medical needs,” says Smith. “One of our babies had cancer, so we went through chemo with her—multiple rounds, lots of time in the hospital. Another one had a feeding tube and a lot of developmental delays. There were many therapy sessions. And a lot of vomit, honestly. It was stressful just making sure she could eat enough to gain weight and live.”

In that instance, Smith went to Foster Love Project for formula. Many of her placements required special formula, and since it can take a while to start receiving Women, Infants and Children (WIC) benefits, Smith often depends on the Foster Love Project’s supply.

Before Foster Love Project opened its donation center to provide essentials to caregivers and children, it hosted many fundraisers and “bag drives,” which remain one of the organization’s most successful initiatives. 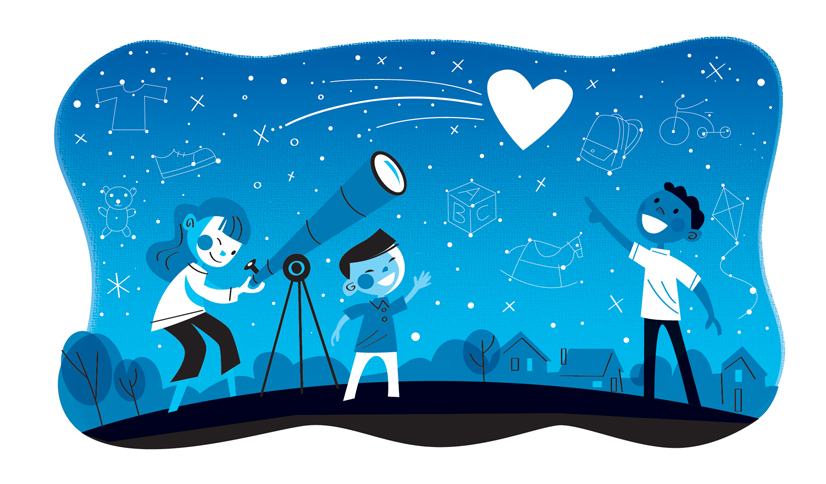 “Did you know that foster children’s belongings are usually placed in a black trash bag? We wanted to provide a bag to eliminate the trash bags,”

says Hughes. She organized the first Placement Bag Drive in 2014, asking people to donate backpacks filled with new belongings for foster children to take to their new homes, including outfits, blankets, socks and books. Her goal was to collect 300 bags, and she received more than 1,300.

Now, Foster Love Project has distributed more than 12,000 bags throughout Illinois, Ohio, West Virginia and Pennsylvania. The 2020 Placement Bag Drive begins November 16. To participate, families choose a size and gender of child to shop for, use the recommended and required shopping lists detailed at fosterloveproject.org, and then take their assembled bag to a drop-off location. 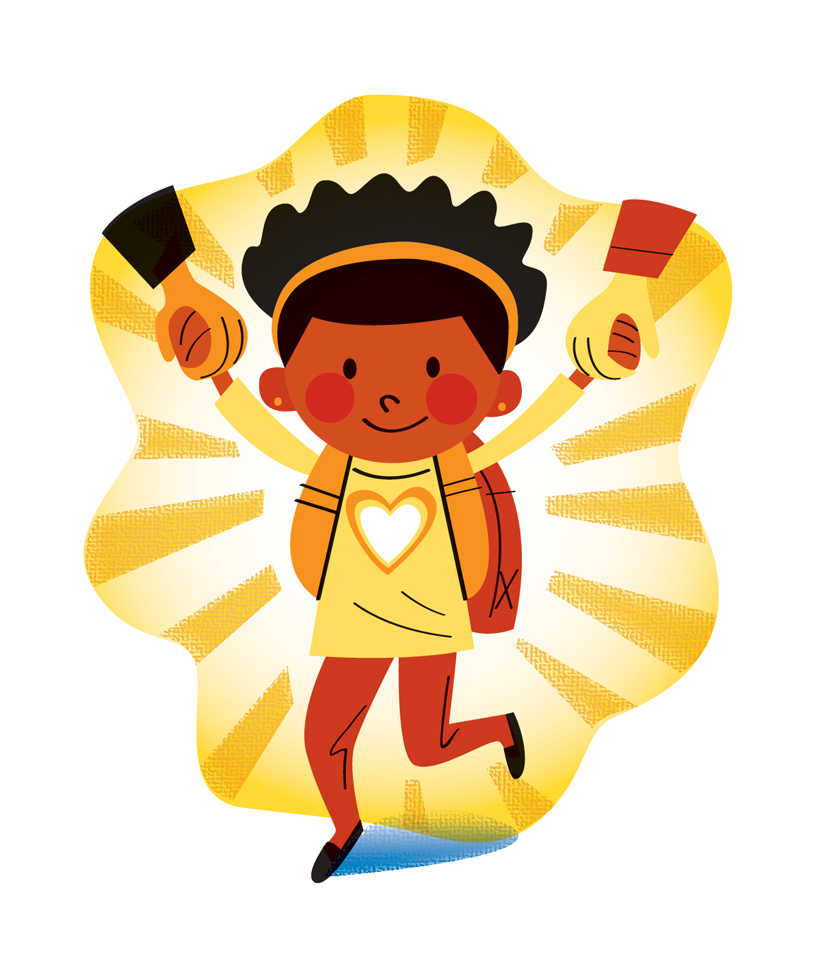 Yet the donation center, which opened in 2017 and has since served more than 2000 kids, remains one of the most effective and unique ways that Foster Love Project accomplishes its mission.

“While it serves the local community, people also drive in from Beaver, Butler and beyond, because there is not another place like it. It’s a huge part of our community,” says Kara Manion, Atlanta Drive, who was one of the key players in helping Hughes open the donation center and continues to support Foster Love Project.

Manion, who is an adoptive parent, started volunteering for Foster Love Project after she met Hughes during a playdate between their kids. She was moved by Hughes’ views on foster care and adoption, and appreciated her advocacy—other than the donation center, which is open only to children who are in foster or kinship care, most of the other programs at he Foster Love Project are also open to adoptive families.

In its first months, Manion acted as the volunteer coordinator for the donation center. Right now, because of COVID-19, the Foster Love Project donation center is appointment-only and is averaging 20 volunteers each week, but during regular times, it requires many more volunteers to keep operations running smoothly.

While special projects for volunteers happen throughout the year, their responsibilities usually involve cleaning, taking inventory and helping children shop.

“Our volunteers make sure everything that is put out is in good condition and everything is organized, just like in a store,” says Manion. “They make sure it’s orderly and neat so that the kids feel that sense of love and respect when they are going in to shop.”

“We do ask that the kids come in themselves,” adds Hughes. “Our message is ‘love and dignity.’ We know they lose a lot of choices in life, in their situations. It’s important in the center that they get clothes they like, a stuffed animal they are drawn to, a shopping experience just for them.”

Hughes’ advocacy for foster children began when she became a foster parent. She has now fostered eight children, two of whom she adopted, and Foster Love Project is her effort to make the process a little easier for everyone involved—the caregivers, birth parents and children.

“Fostering really opened my eyes to families experiencing life crisis,” says Hughes. “All of these kids have parents who love them—they were just struggling in different ways so that they could not care for their kids how they needed to … We, as foster parents, are rooting for them to be reunited. We’re just here to love and support them in the meantime.”

While we did provide small details on the children mentioned in this story, we tried to provide as little information as possible to help protect their anonymity—and because their stories are not ours to tell.