Imagine for a moment going back to college as an adult. Drive to another state and leave your wife and two daughters back home for 10 weeks. Live in a dorm. Go to class all day. Eat in a dining hall. Attend lectures. Write papers. Give presentations. Get college credit.

Now imagine that you emerge from that session in the top 1 percent of professionals in your field, with more than 213 new colleagues from around the world to call on for advice, ideas or to just talk about a job most of us couldn’t handle on our best day.

That’s the experience of Mt. Lebanon Police Chief Aaron Lauth, who this summer completed the FBI National Academy at its headquarters in Quantico, Virginia, to become one of only 49,234 people in the world with such credentials. The course is given to top-level law enforcement officers. Special Agent Brad Orsini, of the FBI’s Pittsburgh division, says the FBI benefits from having trained police all over the world to help during investigations.

Along the way, Lauth learned from seasoned pros, such as Vince Dalfonzo, the FBI crisis negotiator who in 2009 negotiated with the Somali pirates who took over the Maersk Alabama (portrayed in the movie Captain Phillips) and was lead negotiator in a nationally covered 2013 hostage situation where a 5-year-old child was kidnapped and held for nearly a week in a bunker in Alabama.

“You have the opportunity to learn from the best of the best,” says Lauth, who became Mt. Lebanon’s chief in 2015 after 17 years with the department. “It was a refreshing opportunity to really step back and look at the things I’ve learned over the years and take the perspective of looking at things from a more comprehensive view.”

The regional FBI office can nominate only 12 people for the Academy each year. Nominees must guarantee they will remain in law enforcement for at least three years following the Academy. The local FBI did not have the cost per student available, but everything except special events is paid for by the FBI. This year’s participants from our region included Lauth, Sgt. Brian McKeown from the Castle Shannon Police Department and an officer from West Virginia. Mt. Lebanon continued to pay Lauth’s salary during the course.

Mt. Lebanon Deputy Police Chief Mike Gallagher is a 2011 program graduate. Over the years, many of our chiefs and top officers have attended, including Coleman McDonough, Tom Ogden, Gene Roach, Ken Truver and Pat Rooney, among others. The program began in 1935.

High-level training is important for top municipal staff. “The Mt. Lebanon Commission has consistently recognized and supported investment in advanced training for our municipal employees, especially those in leadership positions,” says Mt. Lebanon Manager Keith McGill. “This philosophy has allowed the municipality to remain an innovative and recognized leader in identifying available resources and providing services to residents in the most efficient and cost-effective manner possible.” 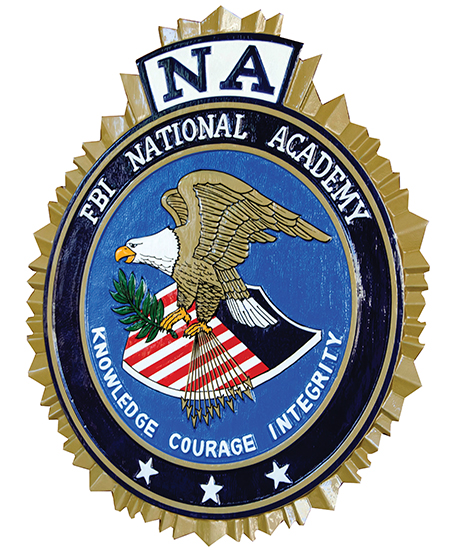 FBI Director James Comey would often stroll in, take off his jacket and talk with the officers, asking them how the FBI can better help them.

It wasn’t all academics. Fitness in Law Enforcement was a required class and often included high intensity interval training workouts, as well as distance running and something fun called “The Yellow Brick Road” in the Marine Corps area of the campus. The 6.5-mile obstacle course featured runs through woods, up crevices, over walls and through streams. At the end, participants received a yellow brick, referring to the yellow directional signs throughout the course. To start training, students had to run a mile in less than 10 minutes, and Lauth says by the end of the semester, most had improved that time by a minute or more. Personal trainers led each class and emphasized ways to stay in shape without getting hurt.

Nutritional advice was an important part of the class, and the cafeteria was stocked with healthy food.

Lauth’s classes were interesting but he received the most benefit from the relationships he formed. “When I have a question or something we’re dealing with or a topic that I’m researching, I have a network of resources available that I can reach out to for advice,” he says. The 213-member class was grouped into five units called homerooms. Most participants were men but women leaders were among the ranks. Lauth’s unit included participants from Panama, UAE, Africa, Wales, Denmark and Switzerland—the class had people from 47 states and 21 countries—but Lauth found most departments had similar concerns, from recruitment to drug issues to the use of such technology as body-worn cameras. During class, successful departments shared experience with those who have had issues. Participants ranged in age from 32 to 69.

During downtime, officers gathered in groups to go to dinner or have activities like karaoke.

Time away from his family was tough. Lauth emailed and called home, and visited on five weekends. Students who stayed on campus could participate in optional trips. Lauth went on several, including one to New York City where the NYPD showed off its special operations unit in Brooklyn and the FDNY took them on a tour of the harbor in their large boat, equipped with water cannons. The FBI Academy’s proximity to the nation’s capital also provided opportunities to tour the White House, the monuments and several museums, including the Holocaust Museum and the Newseum.

During one weekend, the students, along with FBI recruits, participated in National Police Week, where they attended candlelight vigils and services for fallen officers, and even entertained families who lost a member to violence against police officers. It was painful to see the children who had lost parents. “That was hard,” Lauth says, but noted it was fun to see them relax and have a good time during some of the events.

“As I reflect back on my National Academy experience, I am eternally grateful for the opportunity to participate in such an awesome institution,” Lauth wrote in his final paper for his leadership class. “Through the open conversations that occurred during these class sessions, I feel that I have been able to develop my skills to be a better leader for my agency.”