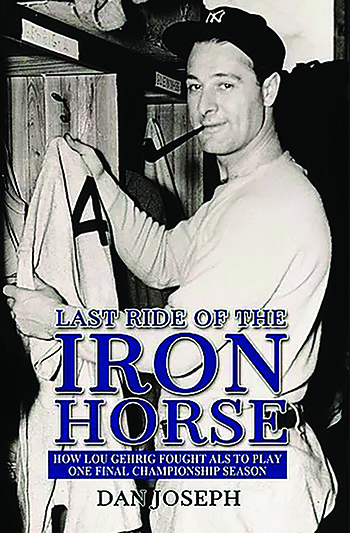 Dan Joseph has spent nearly 30 years in Washington, D.C., but if it hadn’t been for the education and experience he received in Mt. Lebanon, he might never have been a success in the nation’s capital.  Joseph served as an intern at Mt. Lebanon Magazine in 1991 and continued to write freelance articles for a few years after moving to Washington.

“It was a great writing experience, I did a lot of different things and wrote quite a few articles.  It really helped me get my career started.”

Joseph has authored Last Ride of the Iron Horse, a book about Yankees great Lou Gehrig’s last full season in the major leagues, before he retired in 1939.

“It occurred to me years ago that he played the whole 1938 season with ALS starting to sap his strength, and I always thought that was amazing.  I thought nobody had really dug into that.”

Joseph was especially intrigued by the fact that for a three-week period in August 1938, Gehrig performed like his old self, hitting the ball with power.  In doing research, he talked with Richard Bedlack, M.D., Ph.D., of the Duke University Department of Neurology, an ALS researcher who has studied the phenomenon of ALS reversals, which are quite rare.

Joseph attended Indiana University.  He originally wanted to get into newspapers, “but I’m glad I didn’t because of what’s happened to the newspaper industry the past 25 years.”  He did work for a few publications in Washington, then landed a position at Voice of America in 2000, where he has been an editor in its central newsroom for the past 15 years.

Along with his experience at Mt. Lebanon Magazine, Joseph credits the instruction he received in high school from English teacher Phil Bianco.  “He taught me lessons in structure and reasoning that I still use today, whether I’m editing an article or writing a book.  It was really a very good English and writing education.”

After Joseph’s book was published, Bedlack in turn contacted him to see if he would like to collaborate on an article for the RRNMF Neuromuscular Journal, published by the University of Kansas.  Joseph agreed.  “I thought (ALS reversal) was worth closer study­­—how did Gehrig pull this off?  There are some cases where patients had temporarily improved and I think it’s worth noting.  Maybe (Gehrig’s) example can be used to show people who have ALS that it’s not completely progressive, and maybe they can adapt to some extent and it will give them some hope.”