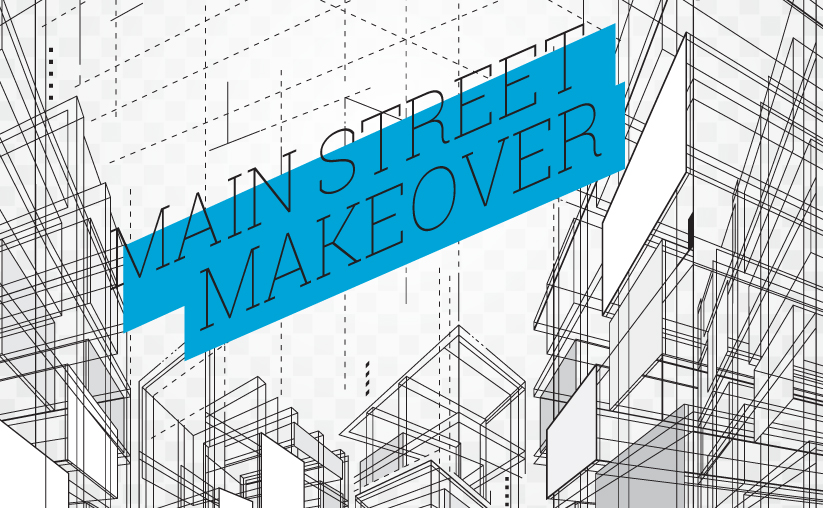 Washington Road, Mt. Lebanon’s nationally recognized Main Street, may be the economic and social center of our town, but on some days it seems as though it hasn’t been refreshed since The Rolling Stones released Exile on Main St.

That’s a bit of an exaggeration, as its last upgrade was in 1993, but it’s long overdue for another refresh. Spotty lighting, mismatched exposed aggregate sidewalks that have been repeatedly patched and re-patched, a nearly hidden light rail transit station and a power grid so weak it can’t even support a food truck make for a frayed appearance and limited functionality of our central business district.

That’s about to change with an approximately $3.9 million, three-year plan to make over Uptown. The project, dubbed Vibrant Uptown, will be completed in stages to ensure businesses will remain open. There is no timetable yet, but a lot of work has been going on behind the scenes.

“The Vibrant Uptown project is one of the most important undertakings the municipality has had in years,” says Mt. Lebanon Assistant Manager/Planner Ian McMeans. “Local business districts are the face of their respective towns and it is essential for the Washington Road streetscape to reflect our great community.”

Commercial Districts Manager Eric Milliron, who is the municipal project lead on the plan, agrees. “The aspiration of this project is to create a 21st century Uptown—a place that really reflects the character and vibrancy of our community by celebrating its unique place in our region.”

First up on the docket are the unsexy but important items—new sidewalks, lighting and conduit for things like electricity that can be used to support live entertainment, and water to keep planters flourishing. New seating, trash and recycling cans likely will be part of that first stage.

Although Uptown is in Mt. Lebanon’s National Historic District, do not expect a Disneyfied vintage look. You will not see light fixtures and cobblestone walkways reminiscent of 1912, when Mt. Lebanon was founded. Early design sketches do have a bit of an art deco tone to reflect the municipal building’s style, but it would likely be subtle and blended to feel comfortable and familiar.

Lighting would be energy-efficient, dimmable LED lamps, closed at the top to avoid light pollution. Exposed aggregate sidewalks would be jettisoned in favor of brushed, trowel-cut concrete, like that on Beverly Road. It’s less slippery and easier to repair and replace.

The project also calls for true “placemaking,” or turning Washington Road into a destination by adding amenities, elements of accessibility and attractive features, while improving the connectivity between the central business district and the Port Authority light rail transit station.

Draft schematics call for redesigning the Washington Road plaza above the T to add seating and decorative finishes, and repainting the clock black to ditch its dated blue-green hue. The area in front of the municipal building, 710 Washington Road, could get a reconfiguration to more thoughtfully provide handicapped access to city hall and create better pedestrian flow near the South Parking Garage.

Some planters, which are too short to sit on but tall enough to trip over, could be removed or relocated. The district would get accessibility upgrades such as improved wheelchair ramps and possibly, additional handicapped parking spaces.

Parse Way, the alley above the T, could become more than just a bus stopover. Its central location could make it an excellent place to host the Farmers’ Market and other open-air shopping or dining. But first, pigeons and dumpsters would have to move out.

Lastly, the plan includes public art, some of it representational and some of it abstract, to be placed throughout the avenue. Tim Steinouer, a professional artist and member of the Mt. Lebanon Partnership, has been helping with the artistic vision while serving on the group’s design committee.

“This is an exciting project for the entire community and will have long-term impacts on the nature and character of Uptown Mt. Lebanon,” McMeans says.

The 1993 renovation was part of a $600,000 streetscape plan that provided new furniture, sidewalks, street lighting and planters. As you would expect, the proposed upgrades coupled with nearly three decades of inflation mean the price has increased exponentially since then.

The National Main Street Center, headquartered in Chicago, just renewed Uptown’s status as a Main Street America for the next five years, which means Milliron has other grant options available.

Anticipation for the makeover is already starting to build in the community. “As a business owner I’m looking forward to having beautiful new sidewalks and well-lit streets and storefronts,” says Elizabeth Boyd, who has owned Uptown Coffee, 723 Washington Road, for 25 years. “More importantly, as a Partnership board member, I’m excited about having Uptown Mt. Lebanon be a safer, more functional space that will meet the community’s many needs.”

To say the Uptown project has been extensively studied is an understatement. In the last seven years, four studies have looked at upgrading the business district. Examination began with the 2013 Comprehensive Plan. Comp plans, which are required every 10 years by Pennsylvania’s Municipalities Planning Code, are land use plans that help towns set priorities for development. That year, Environmental Planning and Design (EPD) put together our plan, at a cost of $70,000. Uptown was just one of the topics it studied; others include transportation and protection of assets, including natural and historic resources.

The plan suggested municipal officials should look more closely at Uptown, and conduct a strategic plan that would examine the use and function of the district. EPD completed that plan too, at a cost of $14,090. Among the plan’s suggestions: “activating” Parse Way, by making it more attractive and functional, improving sidewalks and seating on Washington Road and expanding programming at Clearview Common.

Next, in a $12,945 public space improvement plan for Washington Road, consultants from evolveEA gave specific ideas for enhancing the area, including concepts for lighting, benches and plantings.

Finally, the Mt. Lebanon Partnership commissioned a $2,250 placemaking plan from Design Island that presented ideas for public art and other visual dressing.

With a stash of good ideas, the next thing to do was to organize the individuals who will help the project take shape. At the top of the pyramid is the five-member commission, which has the last word on budget and implementation. They will have a lot of help along the way from staff and community volunteers. (See “Involved Groups”)

Finally, the project’s steering committee includes the leadership committee plus representatives from the Economic Development Council, Environmental Sustainability Board, Historic Preservation Board, Equal Opportunity Board, Parks Advisory Board and the school district, plus at-large community members, property owners, business owners and subject experts. That sounds like a lot of disparate interests but that’s exactly the point—to make sure many involved parties have a voice.

At its first meeting, in mid-2019, the steering committee charted a course for the project that included a vision statement: “The Vibrant Uptown Steering Committee’s vision is to actualize a community-serving public space improvement project that incorporates best practices in urban design. Our vision incorporates a long-view to ensure that leading-edge design principles are employed to achieve the goal of a vibrant Uptown and adheres to the principles of: Accessibility, Connectivity, Sustainability, Innovation and Inclusivity.”

As the volunteers were brainstorming, the municipality assigned the professionals to get to work on the details. Mt. Lebanon’s contracted engineers from Gateway Engineers started putting together schematics. After a few more volunteer meetings, the project, which had been on a timeline, took a step back.

“There was a strong feeling that we needed to pause and make sure we were adhering to the tenets of the philosophy of what Uptown should be,” Milliron says.

“Due to the importance and impact of this project, the municipality has brought in a number of subject-matter experts to ensure that best practices in planning and design are followed,” McMeans says.

Gateway invited landscape and urban design experts from LaQuatra Bonci Associates to weigh in. Part of the process included a brainstorming exercise to more closely hone in on how Uptown should look and function. Mt. Lebanon will likely continue consulting with the firm to fill in details as the plan develops.

The municipality also brought in Penny Reddy, a subject expert on disability design planning “to make sure we were capturing the best urban planning practices,” Milliron says.

Art consultant Carin Mince Moyer put together a kit for the Partnership to handle the public art aspect of the project, from seeking participating artists to writing the requests for proposals.

At press time, Milliron was hopeful the schematic phase of the project would be completed and the first phase would be ready to go out to bid in the near future. Emphasis: Hope. Milliron says a project of this size has to be done thoughtfully and carefully so better to get it right than to rush it.

To reference the great Stones cover song, time is on their side.

The Mt. Lebanon Economic Development Council: a seven-member volunteer advisory board that makes recommendations about economic and community development to the municipal commission with an eye toward attracting and maintaining public and private investment.

The Mt. Lebanon Partnership Design Committee:  an approximately six-member group of volunteers from the Partnership and related boards, such as the Historic Preservation Board, who will help select design elements for the project.