The elementary library of our collective past looks the same no matter where you went to school: short stacks of books organized from Easy Reader to Chapter Books. Dewey Decimal numbers dripping from bindings. Librarians shushing. A hulking card catalog in the middle of the room.

Our seven elementary libraries have evolved since then. They’re tech savvy, bright and open and there’s nary a card catalogue to be seen. But what libraries could become is the stuff of dreams: Billions of pages of information, both paper and digital, at your fingertips. Furniture that doesn’t put you in traction. Space to experiment, to think, to invent.

What do YOU want a library to be? That’s what the Mt. Lebanon School District would like to know as it embarks on a multi-year project to reimagine the libraries at each of its seven elementary schools, buoyed by a $175,000 donation from the Conover family of Mt. Lebanon.

It starts with a public forum called “Dare to Dream: Reimagining Our Elementary Libraries,” in the High School Center Court at 7 p.m. Thursday, October 20. The keynote speaker is Keith Webster, Dean of University Libraries, Carnegie Mellon University. Kids in kindergarten through grade 5 can attend and hang out in the Maker Space by Assemble Pittsburgh (reservations requested.)

[Update: read a summary of the event here.] 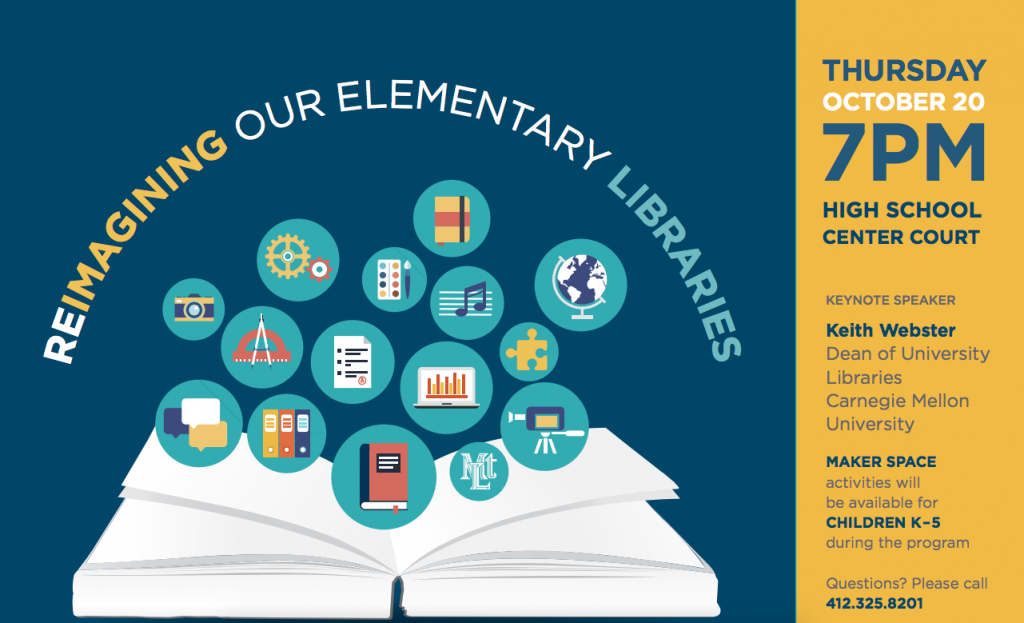 Let’s back up. As the Mt. Lebanon High School renovation was wrapping up, the district turned its attention to the elementary schools. At the same time, The Century of Excellence Program, the district’s capital campaign, was well underway, with several projects already installed at the high school.

Assistant Superintendent for Elementary Education Marybeth Irvin says curricular planning started focusing on the libraries and how to bring them up to a 21st century learning environment. “Obviously the book part is critical,” she says, noting the district is never going to lose its rich supply of meaningful books. But tech integration is a critical supplementation. “Research was always in the purvey of the library but now it looks different.”

At roughly the same time, at the secondary level, the district had begun a rich STEAM program (science, technology, engineering, arts and math) that had begun to filter down to the elementary curriculum. Teachers began using Maker Spaces in their classrooms to bring the concepts to life. A Maker Space is a DIY (do-it-yourself) program that uses everything from computers and 3D printers to electric circuit pieces to crafts to help kids learn. Independent and group projects are based on exploration. Experimentation is encouraged.

Last spring, Irvin and other officials spoke with the district’s tech team and made a trip to Carnegie Mellon University’s Hunt Library to learn ways to replicate the program at the elementary schools—but room at the schools is at a premium. “We looked at the library as being our space,” Irvin says. “Then, the Conover family stepped in.”

“In order to be competitive, it’s going to take private dollars. … We are fortunate enough to be able to give back. It’s made us feel good. I think being able to give back to your school is completing the circle.” — Noelle Conover

Enter the Conovers: Mt. Lebanon residents Dave and Noelle Conover, and their children, Megan, Alex and Anna. The family endured everyone’s worst nightmare when their son, and brother, Matt, died of non-Hodgkins Lymphoma in 2002, nine days before his 13th birthday. After falling into a black hole, the family pulled themselves out and started imagining ways to bring Matt’s memory to life.

They donated hundreds of thousands of dollars for fun technology-based spaces: Matt’s Media Room designed for pre-teens in Gilda’s Club Western Pennsylvania (now named Our Clubhouse) and a playroom for the hematology/oncology ward at Children’s Hospital. Other projects included a playground in Mexico and media carts for hospitals so critically ill children who must stay in their rooms can play too.

But Matt would be 27 now. He would have moved on from toys and he likely would have focused on how to get the next generation of kids interested in technology. And he would have loved Maker Spaces.

So it make sense that the Conover family, all of whom graduated from Mt. Lebanon High School (Anna will graduate in May), is donating $175,000 toward what will be called Matt’s Maker Space, to be located in each of the elementary libraries. The money will act as seed money for other donations to the library projects.

But most importantly, says Noelle Conover, she hopes other Mt. Lebanon families will act similarly, and give to The Century of Excellence Program, to keep the schools fresh, competitive and state-of-the-art. The library was a logical place for the Conover family to start. “Everybody takes part in the library,” Noelle says. She has worked closely with Sloane Astorino, the district’s director of advancement, who is running the capital campaign. 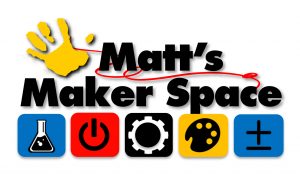 The curriculum will be written at the district level but each school community will choose its library design and features. Irvin says a committee will be formed at each elementary, chaired by the building principal and the librarian. Teachers, parents and older students will help conceptualize the library to make it fit the school’s needs, since Irvin says the elementary schools are “like ice cream. Each one is a different flavor,” a quote she appropriated from Superintendent Tim Steinhauer.

For her part, Noelle is hoping her donation will fund a 3D printer in each library. 3D printers are common maker space items. Others include storage bins filled with things like Legos, LED lights, music, circuit components, tape and batteries. Computers, craft items and even sewing machines can often be found in Maker Spaces.

The district is thrilled to have the Conovers’ financial backing. “We’re very privileged to have a community that supports education the way this one does,” Irvin says.

Noelle says she understands that residents and alumni may feel taxes should pay for everything the school needs, but she says we have many schools with expensive needs, such as air conditioning in the elementary schools. That means it’s up to people to give what they can to give Mt. Lebanon the edge. “In order to be competitive, it’s going to take private dollars,” she says. And for her and Dave: “Our education laid the foundation for us to go to Carnegie Mellon University. We are fortunate enough to be able to give back. It’s made us feel good. I think being able to give back to your school is completing the circle.”