rett Stevens went from life as a basketball star at Mt. Lebanon High School to finding himself in a psych ward during college, restrained in a straitjacket.

To this day, he vividly recalls the sometimes dangerous and traumatic experiences he’s had living with Bipolar 1 disorder.

Stevens, who uses a pen name to conceal his identity, shares the very deep, raw details of what life is like with Bipolar 1 disorder in his book, Crossover: A Look Inside A Manic Mind, published by Page Publishing in June 2019. His latest, Crossing Back Over: The Practice of Owning and Accepting Bipolar Disorder, was released in November.

“You’re seeing firsthand what it’s like to have bipolar (disorder). What a manic episode is. You’re able to see inside the episode because I was able to write it in such detail,” Stevens said of his first book.

Although Stevens never initially intended to write a book about his journey, his doctor recommended he write down his experiences as a therapeutic exercise.

“When I showed it to her, she was like, ‘Wow. This could help a lot of people.’ Once I heard that, I was like, ‘Yeah, I’d love to get that published,’” he said.

The book—written in a way that you almost feel like you’re there with Stevens—starts during what Steven’s described as a “traumatic event” while he was living in Texas and experienced a manic episode (he’s had three total).

Stevens takes readers to a pizza shop in Texas where he’s standing on a stool, yelling at everyone in the restaurant.

“It just kind of goes through what I was thinking, why I was doing that from my manic state—which clearly was not healthy,” he said.

Stevens then takes us back with him to his days at camp in elementary school and shows how his life developed. 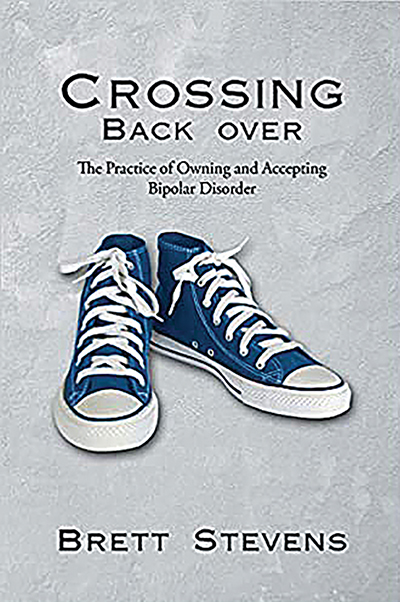 It wasn’t until college that Stevens had his first manic episode, where he heard birds speaking to him, he wasn’t sleeping and, in an anxious moment, he found himself driving over the divider of a five-lane highway because he was so anxious after missing a turn.

When he was taken to the hospital for the first time, it was eye opening for him, as he learned about a fellow patient’s suicide attempt. That was something he had never experienced.

During another manic episode, Stevens recalls trying to break a chained bike loose, smashing a brick into a library window, damaging a park bench and walking on cars, until he was finally stopped by police. He describes the incident and also the thought process that precipitated the actions.

Stevens went on to be a professional poker player, but again, was derailed by a manic episode.

Through it all, he doesn’t see Bipolar 1 as a disability. He’s learned to manage it. He’s engaged and working as the chief operating officer at a startup that provides mental wellbeing services for companies.

“I’m someone that you wouldn’t necessarily think these things would or could happen to,” he said.

While he’s faced challenges, growing up in Mt. Lebanon, Stevens said, instilled great values in him.

“I’m not just saying that,” he said. “I believe that. I’ve lived in Austin, Texas, and Florida and as I get out into the world, the more I realize how great it was growing up in Mt. Lebanon.”

To learn more about his book, visit his website.