Cancer is an illness we fear could attack us, someday, but for one unlucky child in every 245, someday comes a little early. Two college students came up with an idea to make those dark days brighter for kids in treatment. Brian Keller and Zachary Quinn created Love Your Melon, an organization that gives hats to kids fighting cancer, as part of a class project. For each hat sold, another hat is also given to a child cancer patient. What started as an idea has now grown to a certified nonprofit organization, including cross-country tours and, most recently, two Mt. Lebanon High School students.

Mark Lamendola and Brendan Koch, sophomores at Mt. Lebanon High School, entered the Superhero Adventure Challenge as a team called “Melon Heads.” Their goal was to sell as many hats as possible in 30 days. The five top-selling teams won a trip to Minneapolis and the chance to accompany a kid who has either battled cancer or still is on a series of “adventures.” Lamendola and Koch blew the competition out of the water, selling 209 hats and placing second overall. Before departing, Koch admitted, “I’ve never done anything like this.” The students packed their bags and flew across the country this past October.

The Adventure Day began like any other Wednesday, with a bright and early breakfast, but quickly proved to be  extraordinary, as Lamendola and Koch met Zack Conway, an 11-year-old who fought acute lymphocytic leukemia for two and a half years before officially completing treatment. Keith Conway, Zack’s father, says, “they took Zack under their wing and did their own thing as a team.” Part of the appeal of Adventure Day included dressing up as a superhero for the day’s activities, so Spiderman and Spiderman embarked for the day’s adventures with a smaller, fifth-grade Spiderman at their side. 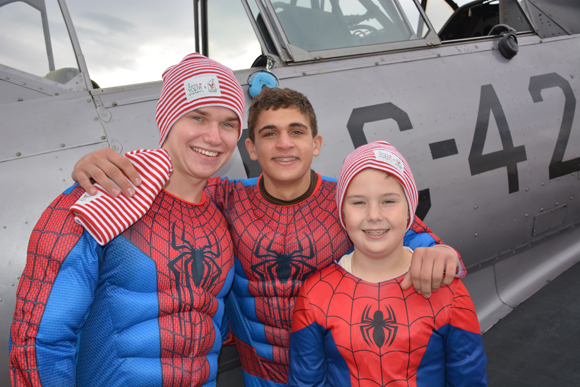 Fifteen  superheroes took on Minneapolis that day. They stopped at the airport for a helicopter ride, later met a famous Minnesota Viking, Super Bowl rings and all, drove 100 miles per hour in a Maserati, and ended the day on a boat, floating down the Mississippi River and enjoying dinner on board, among other activities. The point of it all is to give the kids some therapeutic entertainment and reprieve from their fights with cancer. The team members, like Koch and Lamendola, enjoyed the activities just as much as the kids. While Koch and Conway both loved speedy experiences, the drive in the Maserati and the flight in a WWII US Navy training plane, Lamendola had a blast at the goofy photo shoot earlier in the day. “Everyone was happy,” he explains.

However, the day proved to be like any other day, after all, in that it ended shortly. The next day, Lamendola and Koch headed home to Pittsburgh. The memories of the trip have lasted for Conway, who “loved every minute of the day” according to his father. He’s since gone on to tell his teacher and classmates about Adventure Day with Love Your Melon and loves looking at the pictures. As for Koch and Lamendola, they plan to continue to be part of Love Your Melon. Lamendola wisely adds, “I’ll see where life takes me.” It seems life has already taken them somewhere pretty great—where they’re able to make the world a better, warmer and happier place with the quick purchase of a hat.

Love Your Melon hats can be purchased online, and for each hat sold, a second one is given to a kid fighting cancer. Although the competition is over, you can still support the Melon Heads team by buying hats and selecting them during checkout on loveyourmelon.com.
Related Stories