Happy Birthday, Mt. Lebanon!  About 150 residents gathered at the municipal building Monday, February 6, at 8 p.m., for a special commission meeting that commemorated the founding of Mt. Lebanon Township on February 6, 1912 and launched the community’s Centennial celebration.

Commission President David Brumfield called the meeting to order using the historic gavel made from one of the original Cedar of Lebanon trees that the Rev. Joseph Clokey brought back from the Holy Land and planted in his yard not far from Mt. Lebanon Presbyterian Church, the town’s first church.  It was from those Cedar trees that Mt. Lebanon got its name. At the start of the meeting, Brumfield read a congratulatory letter from resident Willis Siegfried, grandson of one of Mt. Lebanon’s founding commissioners.

Following the meeting, longtime residents Virginia Nicklas and Reg and Lillian Tate, who sponsored the reception, offered champagne  toasts to Mt. Lebanon’s past and future, with other toasts following.  Cake was provided by the Tate’s Potomac Bakery, one of Mt. Lebanon’s oldest businesses. 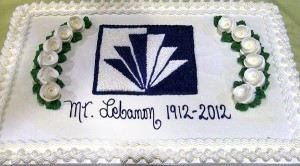 In addition to the Tates and Ms. Nicklas, representatives of other founding and early families who attended included:  Lynn Geyer Banbury, Scotti and Jeanne Mulert, James and Harriet Baird (representing the Schreiner family), Peggy Smith, Fred and Penny Abbott and Tom Stevenson.

Many former commissioners and staff members, school directors, members of the Historical Society of Mt. Lebanon, representatives of the business community and members of Mt. Lebanon’s volunteer boards and authorities attended the event, which was open to the public.   A string quartet from the high school orchestra provided the music and guests enjoyed the premiere of a video of Mt. Lebanon through the decades produced by the Mt. Lebanon Public Information Office.

For information on Centennial events throughout the year, go to http://mtlebanon.org/index.aspx?NID=2060.