In 1973, Upper St. Clair residents Margaret and Fred Doscher put a blind ad in the South Hills Advertiser for a play group, for their children to be part of and for the Doschers could meet some new people and make friends. Responses poured in and Mushroom Family Learning Center (MLFC) emerged.

This year, the Mt. Lebanon preschool is celebrating 40 years in the community. Administrators say the school’s longevity stems, in large part, from the learning philosophy upon which MFLC was built.

“We call it ‘individual growth in a shared environment’,” Director Joan Harrison says. “We look at each child as an individual, meet them where their needs are and focus on what would make each child successful.”

This learning philosophy is more than just the school’s motto. It’s also the root of the school’s moniker.
“Mushrooms grow in good soil,” Harrison says. “They’re all different but they grow together.”

And the school has grown. 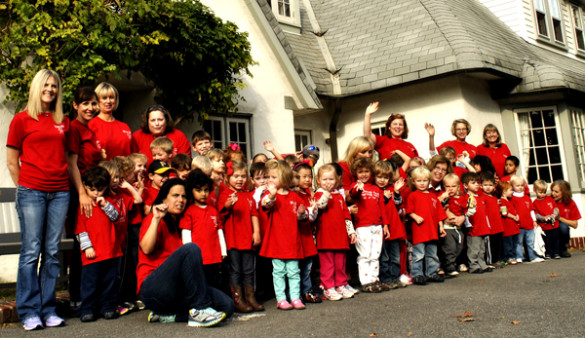 What started with 25 kids and a handful of parent volunteers gathered in the garage of the South Hills Community Baptist Church, has, in four decades, grown into a state accredited and licensed preschool and summer camp with 125 students annually, 17 full-time teachers and a network of thousands of alumni.

“When you find that something works, you stick with it. And it definitely works,” says MFLC board president Susan Sarkis.

Although not affiliated with the congregation, MFLC has called the Unitarian Universalist Church of the South Hills, 1240 Washington Road, home since 1977. Mushroom runs five preschool classes for children from 2 years old through Pre-K, and a supplemental class for kindergartners called K-Too. The school also offers a weekly academic enrichment course, the Pee-Wee Picasso art class, the Happy Cookers program, and Lunch Bunch, where kids—in between bites and sips—cultivate their conversation skills.

Changes in the curriculum have consistently strengthened academics, according to Harrison, but the idea of learning through play has remained firmly planted in the school’s program—a fitting legacy for a school first founded as a play group.

“In 40 years we have moved forward and grown academically but we still focus on play,” Harrison says.  “Everyone is so into test scores, but we want the children to love learning. And if they can come here and become confident in themselves, then we’re successful.”

Mushroom Family Learning Center will celebrate its 40th anniversary with a party in the spring.