Brigitta Day was born into a world on the brink of war. In Leipzig, Germany, in the late 1930s, families faced some hard choices. In order to survive, Day’s family feigned support for the Nazis, a movement she says they did not believe in. Her father was drafted into the Schutzpolizei, the German national police force. Then the war started, and the bombings outside her window began.

When Day, 82, retired in 2002, she started writing the story of her childhood from her home on Washington Road. Just a few paragraphs here and there, whenever the mood struck.

“It wasn’t work at first,” Day said of her writing. “It was more … I have this fantastic computer. I’m in my apartment looking out at the western side of Mt. Lebanon. It leads to contemplation. It was not an attempt to finish a book. It was just thoughts and ideas.”

But Day continued typing up everything she remembered from those tough times. Her family ended up being driven out of Leipzig, and Day spent much of her childhood just trying to stay alive as she fled to Bavaria with her mother and brother after her father was killed during the Warsaw uprising in 1944. In Bavaria, her family lived as refugees in a small farming community, where there wasn’t enough food for everyone. They scavenged the nearby mountains for berries and mushrooms.

A neighbor’s boyfriend encouraged her to finish the project, and her passages eventually became a book titled Mushrooms For Dinner: A German Girl Survives World War II, published last year by The Expressive Press. The book includes photographs of Day’s family, which her mother kept safe during their incredible journey. (“Our silver was stolen, but the photos survived.”)

Day is proud of the end result but admits dredging up her tragic family history wasn’t always easy. “The publisher wanted me to be more emotional, and that was the hardest part,” she said. “Especially concerning my father and leaving for Bavaria. We were in isolation and there was nowhere to go. The streets were muddy. We were always hungry.” 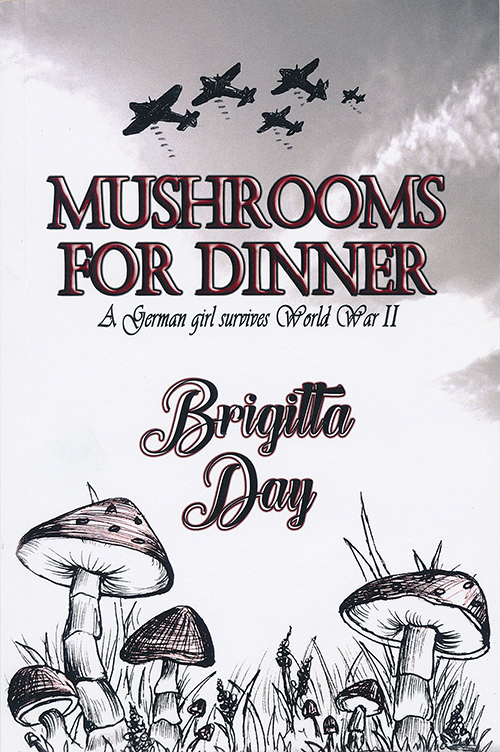 Day’s book makes her disdain for the Nazis clear, but it also shows the horrors that encroached on their lives from all sides. In fact, it was the approaching Red Army from Russia, which had little regard for the German civilians whose towns they invaded, that ultimately forced her family to flee to the west.

The hardships of Day’s early life didn’t instantly end once the war ended, but she did grow into adulthood, married a U.S. Army officer, had her first child, and became a teacher in Germany. Her growing family moved to America in 1964, settling in Mt. Lebanon because her in-laws lived in Upper St. Clair. Her second child came soon after.

“It was a tough time,” she recalled. “Jobs were hard to come by, and I had no idea how to go about job-seeking or even the finer points of life. I didn’t have the right clothes. It’s much, much hotter here than it is in Germany. We didn’t have much luck in making money.”

But Day eventually did get a job with the University of Pittsburgh, and both of her children attended Mt. Lebanon schools. Her life has changed a lot in the years since. Her marriage ended in divorce, there were more jobs, and her daughter, Christina, died in 1986 in a tragic mountain-climbing accident. Her son, Pete, is an investment banker in Boston, and Day is eager for the pandemic to end so she can visit with him and her three grandchildren.

She says the book was largely written for them, so they could understand the hardships she went through. “I just wanted them to know that not everything is easy in life,” she said. “Sometimes you really have to fight hard to get ahead and get what you want.”