“Have you ever been to a performance that deeply moved you?” World-renown marimba soloist and educator She-e Wu posed that question first to a captivated group of Mt. Lebanon Percussion students last Friday, May 13.

Mt. Lebanon Percussion hosted Wu for a guest residency. She is currently the head of percussion at Northwestern University and has an extensive bio which includes performances all over the world, various instruments, multiple compositions, instrument and mallet design and teaching initiatives for students from middle school through college.

Wu’s visit came at an opportune time, as she shared some valuable insights and techniques for the students to use in their large spring concert, the 32nd Annual An Evening of Percussion, from May 26 to 28.

She spent some time speaking with us before the start of the evening. Scroll down to read the full interview.

What were your first experiences with music?
I was born in Taiwan … One day, I was walking with my mother, and we passed a music store. I saw children in there playing piano, and I thought it was very interesting. So there I was, with my face pressed against the glass door … and she said, “Would you like to go inside?”

I was completely taken by all the different kinds of sounds. Of course, I was in there for a while. My mom wanted to go home and make dinner, so she was trying to drag me out. The lady in the store said they were having an early music class [for ages four and up] … and even though I was only three and a half, they offered to let me try it. Meanwhile, I’m holding onto the piano leg because I didn’t want to leave. So I started playing, and I did OK. After that, I began taking piano lessons.

Then, when I was six, my mom gave me a choice. She is a music lover, and her favorite instrument is the French horn. She wasn’t able to learn growing up, so she wanted to make sure I had the opportunity … She said to me, “Today is the day I set up a French horn lesson for you. I’m so excited for you.”

But I could not even make a sound. The teacher said, “Ms. Wu, I’m sorry. Your daughter is maybe too young. This is not for her right now. But I do think it would be good for her to learn another instrument.”

So my mother asked me what I would like to do, and I said, “How about the timpani?” She laughed and said, “You don’t even know what timpani are!” And I said, “They are the big drums in the back of the orchestra.” She then went and somehow found me timpani lessons. I wasn’t even tall enough to play them. They had to build a two-step thing for me to stand on … I wanted to be a timpanist forever. I loved it. 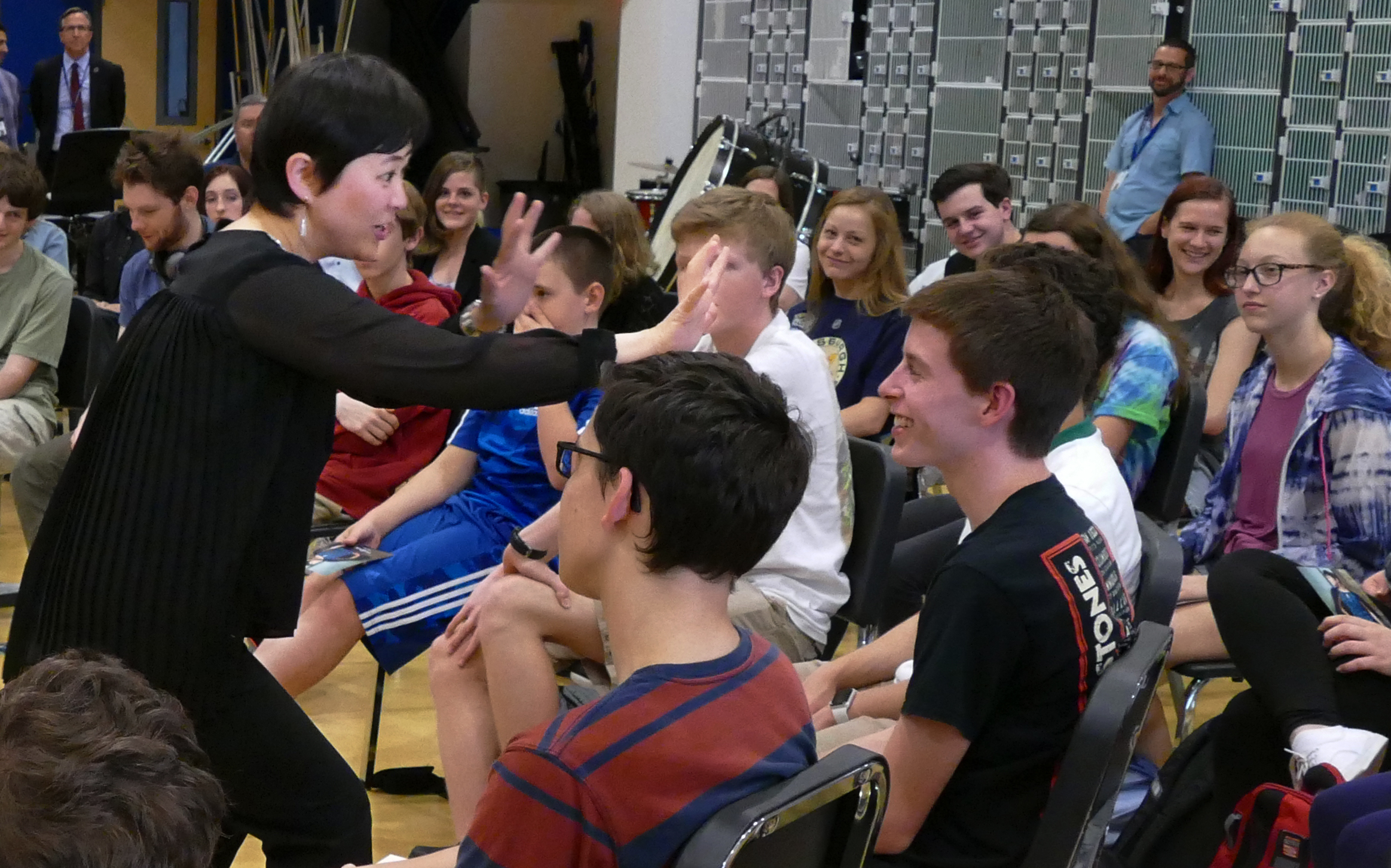 How did you begin playing the marimba?
I was supposed to go to Vienna, because at that time, when you were a timpanist, there is a tradition of how timpani is played in Vienna [that musicians could study]. I was supposed to go there when I was 17. Instead, I followed a young man and went to Denton Texas to study at the University of Texas … And as soon as we got there, we broke up. I couldn’t speak English, I didn’t know anyone, so I just practiced a lot.

… I experimented with all these other instruments in different genres of music … I was very interested in the steel drum, drum sets, drum line. I volunteered to be in [drum line in the] marching band for four years … They were my family away from family. They adopted me, they taught me how to speak English … But in the end, I kept coming back to marimba because I was behind. I started with four mallets when I was 18, but everywhere else you go, they are probably exposed to four mallets at middle school. Where I am from, that was not the case. I was behind. So I caught up, and then some.

Percussion seems to be male-dominated. Was that a challenge for you?
It is somewhat male dominated. Although it is, I have never felt that I was treated differently. For some reason, more females play flute, more men play drums, and other instruments are like that too. That’s just how it is. But there are more and more women [in percussion today]. 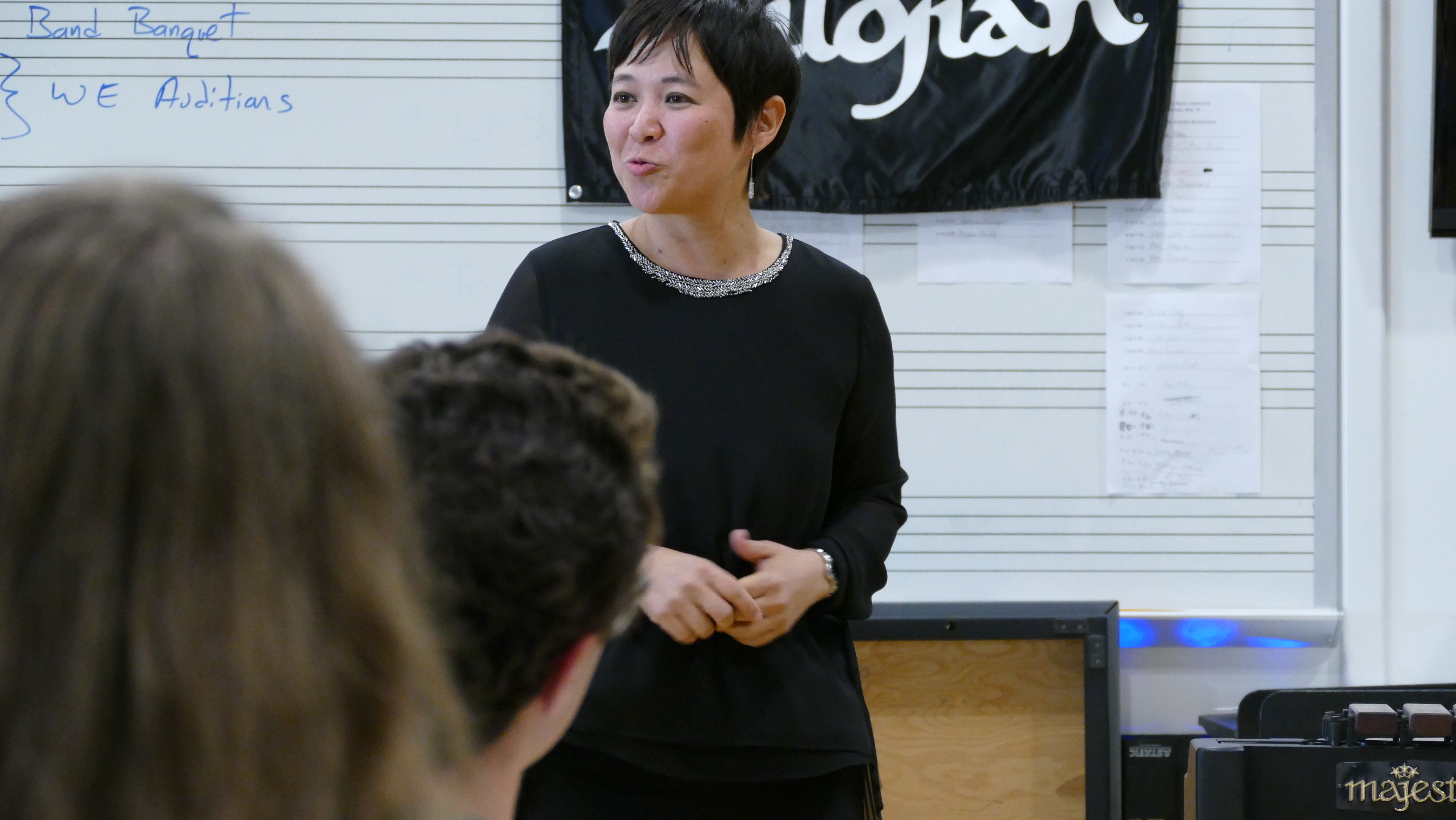 What is your favorite music?
First, the music of J.S. Bach. I love the music he wrote. His music is sublime. And also, I have to say “music that is new.” Music that I haven’t heard. I just find it so interesting. It’s like a new book that I can’t wait to get into. I just want to get to know it.

Do you get to go home often?
I got to go home just last summer. My whole family is still there. I’m the only one here. Last summer, I got to go back and work at a summer camp with, I believe, 250 students, though it actually might have been more. There were six or seven groups who rotated [to different activities]. I saw them every day for eight days. That was fun. I hadn’t done that in a while.

Looking at your bio, you seem to travel a lot. What is that like?
From the end of September to end of November, I was in Italy, Finland, London, Texas, Philadelphia, New York, Korea and I can’t even remember where else. They were all separate trips. All of this happened in two months’ time. I don’t know how I actually did it as the head of percussion [at Northwestern University]. I see my students every week. So I would teach all week, and then on the weekend, I would be somewhere … I do a lot of different things when I’m away: performing, teaching, judging competitions, conducting, working with students. There is almost never time to sight-see.

I’m actually going to Moscow in 10 days to perform. I will be in the Cultural Center in the City of Moscow. There will be percussion ensemble competitions, solos, young percussionists will compete. It’s my next stop. 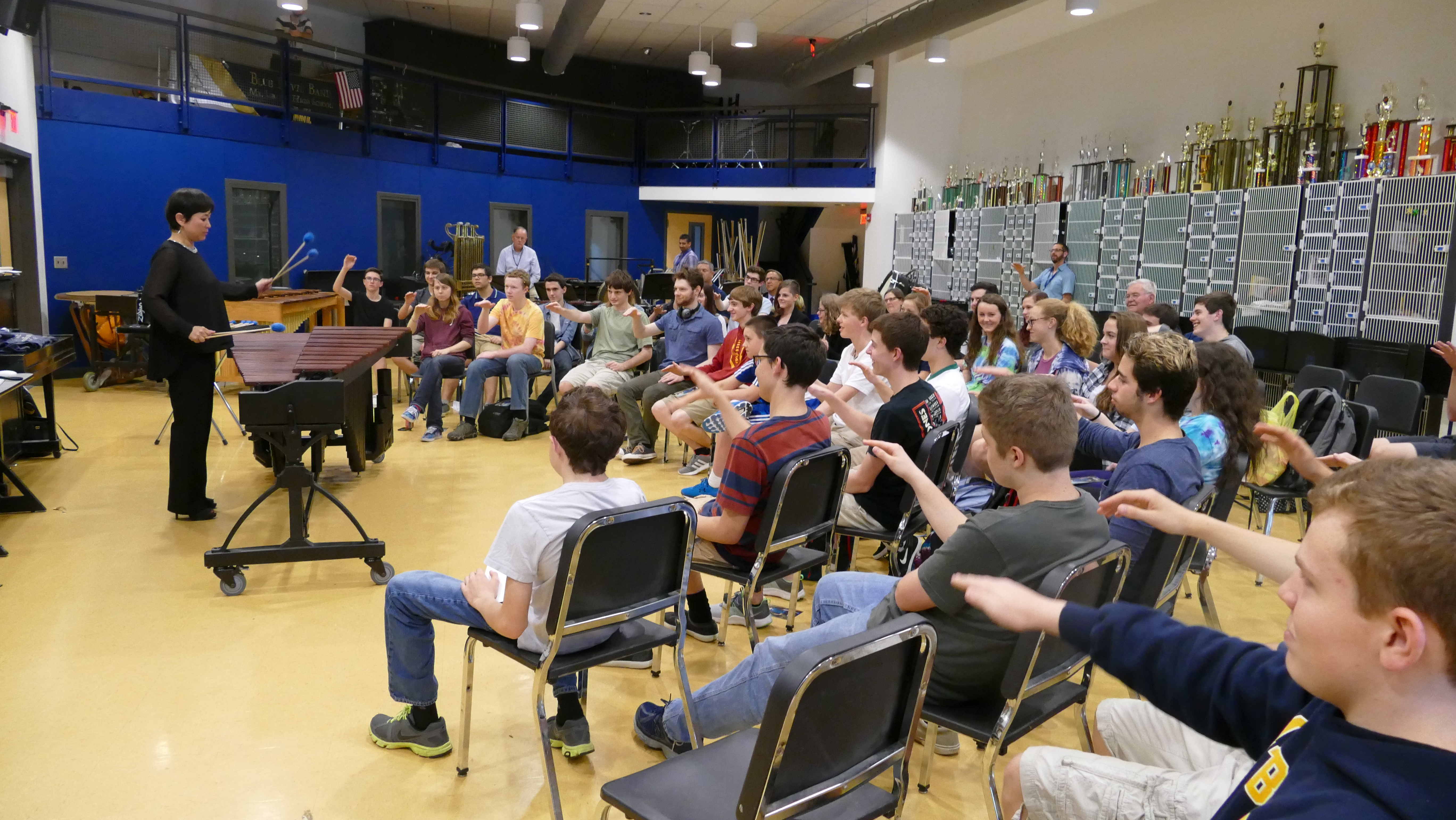 What do you have planned for the master class?
I am just here today. First, I am going to demonstrate the possibilities one has with the marimba sound-wise and how to make music. Then, some students will play for me solo, and after that, I’m going to coach percussion ensemble. I’m very excited to be here. Did you know Mt. Lebanon Percussion has been around since 1984?!

What advice do you have for young musicians?
Explore. Listen to a lot of music. Enjoy talking about music with friends and sharing music. And be creative. I think that’s really important. Music is alive … It’s like Woody from Toy Story. He’s stationary sometimes, but at other times, he’s totally alive…. with music, you might see the dots printed flat on the page, but you have to find those 3D glasses of your own to see them in a very different way.

Click here to learn more about Mt. Lebanon Percussion and their upcoming “An Evening of Percussion” concert from May 26 to 28.