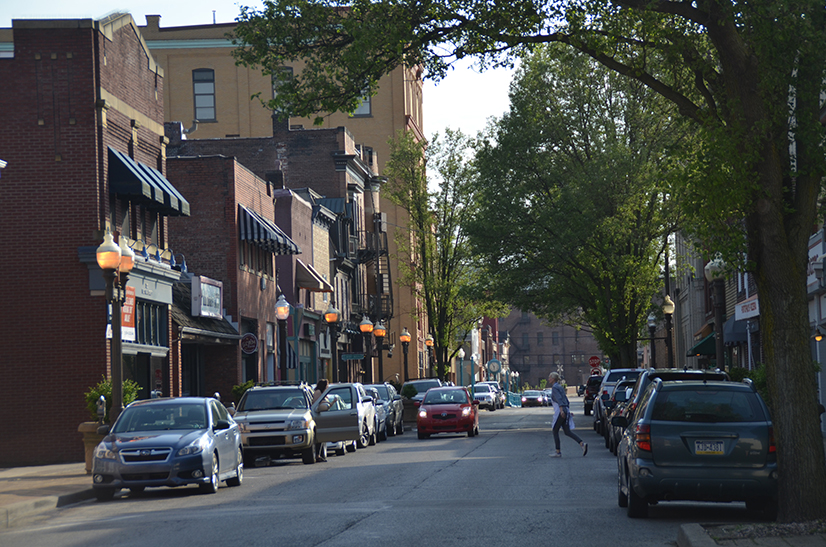 It’s impossible to live in Mt. Lebanon without at least passing through Carnegie from time to time. Most Mt. Lebanon residents can make the 4 ½ mile drive in about 10 minutes, and then jump onto I-376, Route 50, I-79 or Noblestown Road, to go pretty much anywhere in Western Pennsylvania and beyond.

But the reason Carnegie is the first in our Near Neighbors Nine series is because it is so much more than just a juncture of highways—it is a thriving town that has grown tremendously in recent years.

Carnegie truly has become a destination in its own right.

It covers 1.6 square miles and had a population of 7,972 in the 2010 census—a quarter of the overall size and population of Mt. Lebanon. With Chartiers Creek running through the center of town, it originally was a summer camping spot for Native Americans, and Europeans started settling in Carnegie almost as soon as they arrived at Pittsburgh’s Point and began exploring the local waterways.

Carnegie was incorporated in 1894, when two smaller boroughs separated by the creek merged into one. After Andrew Carnegie built and endowed the Andrew Carnegie Free Library and Music Hall, and Carnegie High School, local leaders decided to name the town after him.

The downfall of the Pittsburgh steel industry in the ’60s and ’70s caused a large economic downturn in Carnegie, but, like most of the region, it has recovered through the decades. Now, Carnegie has a long, walkable main street bustling with restaurants, shops, businesses and cultural attractions, surrounded by six residential neighborhoods.

#1 Bakn
335 East Main Street
Have you ever heard of a bacon flight? At Bakn, you can try one for yourself! Six flavors of bacon are included in this popular appetizer, and you can also order a host of quirky bacon-themed foods such as shrimp and grits (and bacon), bacon stuffed pancakes and a one-pound BLT. Owned by Mt. Lebanon residents Randy Tozzie and Susan McMahon, Bakn is a cool, intimate spot for cocktails, brunch or any meal of the day, and it even offers bacon-free menu options for vegetarians (or the very odd person who doesn’t like bacon). www.EatBakn.com. 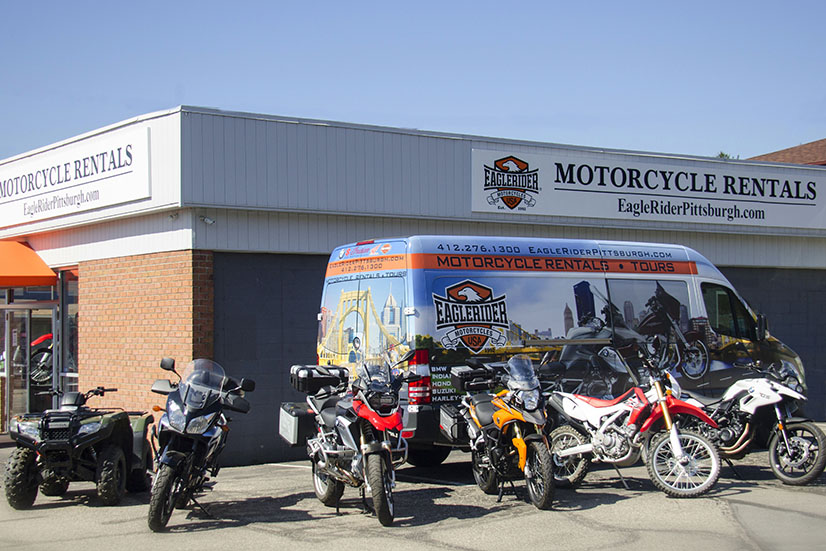 #2 EagleRider PGH
500 East Main Street
EagleRider is not just the only place in Pittsburgh where you can rent a motorcycle, but it’s also the only place for miles around where you can rent an ATV (for which you don’t need a license). ATV riders can rent a trailer and head for a local trail or out to EagleRider’s sister company, Mines & Meadows ATV Park in Wampum, which has more than 75 miles of ATV trails, including guided tours through an abandoned mine. www.EagleRiderPittsburgh.com

#3 Carnegie Stage
25 West Main Street
A professional theater company (Off the Wall), a comedy troupe (The Harvey Wallbangers), a contemporary dance company (fireWALL) and the Pittsburgh New Works Festival all call Carnegie Stage home. Because so many groups use the space, and Off the Wall performs in repertory, there are often three or more different types of productions at Carnegie Stage in a given month. With only 70 to 90 seats available, it makes for an intimate, unforgettable night out at the theater. www.CarnegieStage.com. 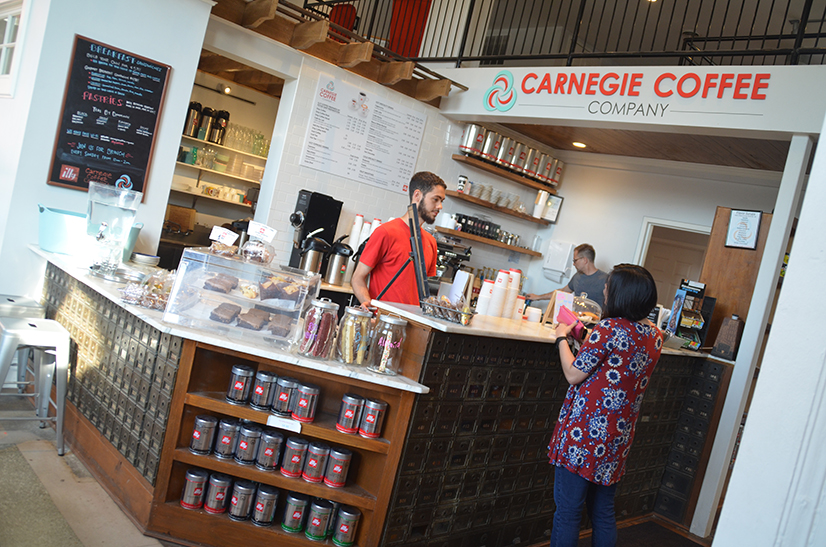 #4 Carnegie Coffee Company
132 East Main Street
Italian-grown Illy coffee has become a favorite of coffee aficionados in Europe and all over the world, and you can try it right here in Pittsburgh at the Carnegie Coffee Company! But Illy isn’t the only reason to stop at this quirky coffee shop. Located in the former historic post office, the space has a real reading-nook feel, and the baristas have fun making seasonal creations (such as the “peep-accino” for Easter) and “ugly cakes” (they really aren’t that ugly). The owner, Greg Romeo, is also the pharmacist and owner of the Medicine Shoppe, which is located in the same building. He and his wife decided to open the coffee shop after getting hooked on Illy Coffee during several trips to Europe. www.facebook.com/CarnegieCoffeeCompany/

#5 Andrew Carnegie FREE Library AND Music Hall
300 Beechwood Avenue
One of only five libraries in the world that Andrew Carnegie endowed, the Andrew Carnegie Free Library includes a music hall modeled after Carnegie Hall in New York City, a preserved Civil War Grand Army of the Republic (GAR) post and museum, and of course, a library. The music hall is booked year-round, and it is home to Stage 62 and the Carnegie Performing Arts Center. The entire building has been undergoing renovations for the past decade, and it is now fondly referred to as “Carnegie’s Jewel on the Hill.” www.CarnegieCarnegie.org.

#6 Apis Mead & Winery
212 East Main Street
In ancient Greece, mead was considered the drink of the gods. But you don’t have to be a god, or drive all the way to Olympus, to try mead today. Apis Mead, now sold in dozens of locations around Pittsburgh, is based on Main Street in Carnegie. The small tasting room hosts bands, special drink releases, and it even has “dog days,” when you are encouraged to bring your canine companion along. The next one is July 29. Just remember to stop somewhere for a bite to eat first, as they may not have food available at the tasting room, unless you are there during a special event. www.ApisMead.com.

#7 Appleicious
415 West Main Street
This adorable little chocolate shop is easy to miss, but you will really be missing out if you visit Carnegie and don’t stop here. Appleicious began 17 years ago as a casual candy apple making venture in Paul Godleski’s basement, and business has since exploded—serving major local corporations, professional sports teams and a distribution network stretching for hundreds of miles. Stop by for fresh doughnuts, vibrant seasonal treats, themed gift baskets, one of their enormous candy apples, or for lively conversation with Paul and his jovial team of chocolatiers. www.Apples4You.com 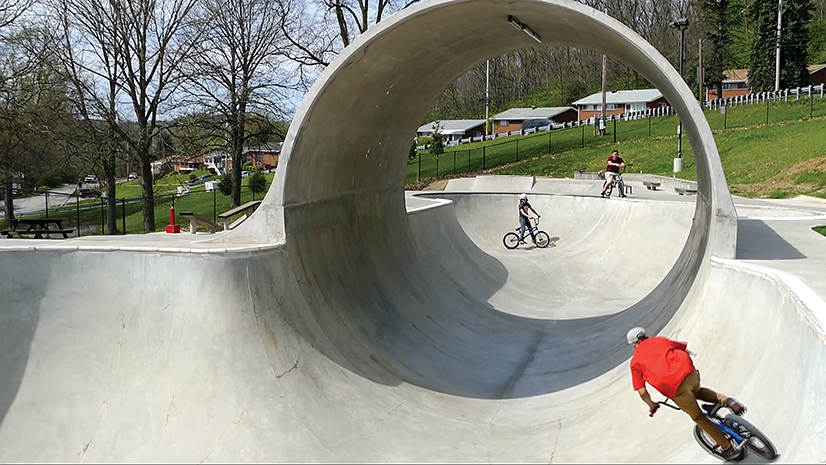 #8 Carnegie Park
Forsythe Road
We have many parks in Mt. Lebanon, but we do not have a skate park or a dog park. The dog park at Carnegie Park features a separate area for smaller dogs, and it is home to Carnegie’s annual Dogapalooza, scheduled for June 4 this year, which promotes canine health and safety in the community. Also, if you have driven past the Carnegie Park in the past two years, you probably noticed Pitcher Park Memorial Skate Park, for skateboarders, rollerbladers and BMX bike riders. Both parks are free and open to the public. www.CarnegieBorough.com/Parks.html

#9 Café Delhi
205 Mary Street
You’ll find some of the best Indian food in Pittsburgh at Café Delhi, operated by the Indian Community Center. The café has an extensive vegetarian menu, and the patio is a pleasant spot in the summer. If you are visiting, be sure to pop in and see what’s happening at the center, which hosts festivals, lectures, Indian dance and yoga classes, Bollywood-themed events, music and more—many of which are free and open to the public. www.facebook.com/paicc/